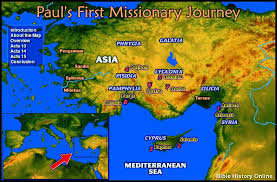 The Maronite Church declares, in its official documents, that it is an Antiochene Syriac Maronite Church. The Maronite Patriarch is, officially, the Patriarch of Antioch and all the East. It is desirable to say a little about Antioch, and its role in early Christianity, because as a capital city and centre of culture, Antioch exerted a magnetic influence on events in its vicinity. Many Christians, even many Maronites, know nothing of Antioch, and that is a great shame. Antioch played a noble and unique role in the early Church. It is an honour and a privilege to be children of the Antiochene Church.

Several cities in the ancient world were named Antioch. The one which we are concerned with is the Antioch which was on the Orontes River, twenty miles from Seleucia, its sea-port, which was on the Mediterranean Sea. Some fifty to fifty-five miles to the East was the ancient city Aleppo; and about sixty miles south was Apamaea (a large city which was probably near the ancient Dayr Mar Maroun, the monastery of St Maroun), while sixty miles south on the coast was Laodicea, still an important sea-port in modern Syria. When we speak of “Antioch” we often mean the adjacent countryside as well as the city. The people of Antioch comprised mainly Greeks and Macedonians, but included a number of Jews, and native Syrians.

The last pagan inscription from Antioch is dated 367-8; all later inscriptions are Christian. We should not think of Antioch as being just another city: it was not. After Rome and Alexandria it was the largest city of the Roman world. It was one of the marvels of that world.

So where does Antioch fit into Christian history? So far as we know, none of the apostles or disciples went there during the life of Christ. However, Antiochians met the faith very early on, almost certainly in the lifetime of Christ, for we are told that one of the first deacons was Nicolaus, a “proselyte” from Antioch (Acts 6:5). Prior to Christianity, a proselyte was one who had been a Gentile but had become a Jew. Nicolaus is the first named gentile to become a Christian. His ongoing ties with Antioch points to the possibility of a direct link between the inner circle of the early Church and that city.

Nothing further is said in relation to Antioch until we learn that after the persecution which followed in the wake of Stephen’s martyrdom (itself after the death of Christ), missionaries were spread as far as Phoenicia, Cyprus and Antioch, with the significant detail that they preached only to Jews (11:19). This martyrdom probably occurred in 34 or 36. The evangelisation of the Gentiles begins in this way:

There were some Cypriots and Cyrenians among them (the evangelists) however, who came to Antioch and began to speak to the Greeks as well, preaching the Lord Jesus. The hand of the Lord was with them and a great number who believed turned to the Lord. The news about them reached the ears of the church in Jerusalem, and they sent Barnabas to Antioch. Then when he arrived and witnessed the grace of God, he rejoiced and began to encourage them all with resolute heart to remain true to the Lord; for he was a good man, and full of the Holy Spirit and of faith. And considerable numbers were brought to the Lord. And he left for Tarsus to look for Saul; and when he had found him, he brought him to Antioch. And for an entire year they met with the church and taught considerable numbers; and the disciples were first called Christians in Antioch. (Acts 11:20-26)

So, when the Book of Acts says that the Cypriots and Cyrenians preached to the Greeks “as well”, it would mean that these were pagan Gentiles who understood the Greek language, not necessarily even Greeks by birth, and certainly excluding, here, Greek-speaking Jews. Antioch was probably a good place for this evangelisation, since the Jewish opponents had much less power in Antioch than in Jerusalem, where they made the spread of Christianity dangerous. It must be remembered that Cyprus is not far from Antioch by sea, and that the Antiochians probably saw many Cypriots: this could have been a factor in Barnabas’s success among the Cypriots in Antioch, for he was himself a Cypriot (Acts 4:36).

Barnabas was clearly an important figure in the mission to the Gentiles: he was mentioned in Acts 4 and 9. Acts 4:36-37 tells us: “Joseph, also named by the apostles Barnabas (which is translated “son of encouragement”), a Levite, a Cypriot by birth, sold a piece of property that he owned, then brought the money and put it at the feet of the apostles”. The fact that he was a Cypriote is significant: it suggests two things, first, that he shared the more open attitude that the other Christian Cypriotes did, and secondly, that the Jerusalem church may have sent him to Antioch because he knew the Cypriotes who had begun the mission, or could be expected to have a natural fellow-feeling with them. It was Barnabas who recommended Saul to the church in Jerusalem when they doubted the sincerity of his conversion (9:29). Barnabas spent some years with Paul, which Paul refers to in Galatians 2:1 and 9. It is thought that Paul and Barnabas began their mission in Antioch around the year 40. It may also be significant that Paul and Barnabas, who did not always travel together, used Antioch as their base, until in about 55 or 56, when Paul returned not to Antioch but to Jerusalem, where he was arrested, and his ability to travel as he willed was lost. Antioch was not only well-placed for missionary work, it acted as a base for people like Barnabas and Paul, who although not born there, worked from it. Antioch caught the spark from Jerusalem, and then it spread the fire.