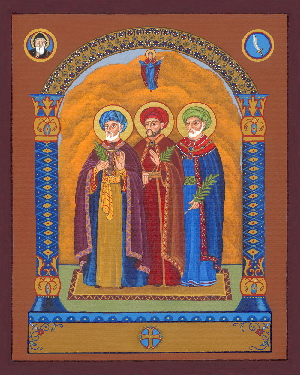 The Massabki brothers, Francis, Abdel Moati and Raphael, were Maronite martyrs, slain in Damascus in 1860 in part of a dramatic anti-Christian uprising in Syria and Lebanon from April to July of that year, when more than sixty villages were destroyed in the Shouf and the Matn. Around 2,600 Christians were slaughtered in Deir El-Qamr with the connivance, if not the help of the Turkish authorities. It is estimated that some 12,000 Christians were slain in Lebanon, and 11,000 in Syria.

Economic jealousy was perhaps the chief reason for the massacres: the Christians were perceived as being undeservedly wealthy, and benefitting in Muslim lands while many of the Muslims were living in poverty. Further, in 1856, the Turkish Empire had lifted many legal restrictions on Christians. Many Muslims became envious simply because the Christians were no longer oppressed to the same degree as before. This resentment may have been at least a contributing factor to the slaughter of the Massabkis, who were from a prominent wealthy Syrian family. Although they were esteemed for their piety, wealth and willingness to aid the poor and the needy, these virtues might even enrage, rather than pacify, an envious man.

Of the Massabki brothers, Francis and Abdel Moati were each married with children. Raphael, the youngest, who apparently was not well, remained single. They had another brother, the priest Fr Abdallah, who was not with them at the time of their martyrdoms. Of the brothers, Francis was the best known. He was a generous man and a successful silk trader, famous in Lebanon and Syria alike. He represented the Maronite Patriarch when His Beatitude needed to conduct business in Syria. All three were known for the amount of time and the fervour which they devoted to prayer. They performed much of their charitable work from the Franciscan monastery in Damascus.

When the 1860 attacks and massacres by Muslims in Damascus and Druze in parts of Lebanon started, Muslims set fire in the Christian neighbourhood of Damascus, and the brothers, along with a large crowd of Christians, took refuge in the Franciscan monastery. There, they prayed and celebrated the Mysteries of Forgiveness (confession) and the Eucharist for the last time.

While Francis was alone in the Church, kneeling and praying before the statue of Our Lady of Sorrow, he was filled with supernatural hope. After midnight, a band of armed Muslim rioters broke into the monastery. The Christians were terrified: some managed to run away, and others hid themselves. The murderers said to him: “Sheikh Abdallah has sent us to save you from death; you, your brothers, your families, and all those who depend upon you for protection, on the condition that you deny your faith and convert to Islam.” Francis courageously replied: “Sheikh Abdallah can take the money I lent him, he can also take my life; but my faith, no one can make me deny. I am a Maronite Christian and in the faith of Christ I will die. As our Lord Jesus commanded, we do not fear those who can kill the body.”

This is a reference to Matthew 10:28 where Our Lord taught: “And fear not them that kill the body, and are not able to kill the soul: but rather fear him that can destroy both soul and body in hell.” As Francis began to pray, they massacred him with swords and daggers. He had lent the sheikh eight hundred thousand pounds! It was a vast fortune in those days.

Abdel Moati was seized at the chapel door, and told to deny his faith in order to save his life. In a clear voice, he said: “I am a Christian, kill me, I am ready.” Raphael was found and given the same order – convert or die. He fell to his knees in prayer. Both of them, like their brother, were cut down. They were later buried with the Franciscan priests who had also been martyred. But Christ crowned their martyrdom.

On 10 July 1860, his Holiness Pope Pius IX declared them Venerable. On 10 October 1926 they were beatified. The campaign for their beatification was spearheaded by Archbishop Bechara Al Chemaly of Damascus’ letter to Pope Pius XI, noting that it would be a source of grace for the Damascus community, and could help to revive Christian life in the hearts of the Eastern faithful. On 7 October 1926, His Holiness Pius XI proclaimed the beatification of the three brothers, saying: “By the power of these lines are named Most Blessed Martyrs the servants of God: Francis, Abdel Moati, and Raphael Massabki, Maronites of Damascus. … and we hereby permit the display of their relics before all the devout, and the celebration, on their day of remembrance, of the Liturgy of the Martyrs.

Their feast day is 10 July. The cause for their canonisation is proceeding.

Today, when the faithful of Damascus and all Syria have been decimated by the Islamist scourge of intolerance and hatred, it is more important than ever that we remember the Massabki brothers, profit from their example, and pray for their intercession.

In our zeal to hold to the faith and to spread it, we must not make the mistake of being as intolerant and hateful as those who would destroy the faith are. Rather, while we acknowledge evil for what it is, and we pray God to keep it far behind us, we renew our desire to be motivated only by a desire to know, love and serve Him who is the most perfect object of love and the only object of worship. We do not pretend that those who are persecute us are not doing something evil, but neither do we presume to condemn them. Our prayer must be united to that of Our Lord on the Cross: “Forgive them, Father, for they know not what they do” (Luke 23:34)

Prayer to the Blessed Massabki Brothers

Blessed Massabki Brothers, Abdal-Moati, Francis and Raphael, pray to the Lord our God for me, for my family and for the Church. Graciously beseech of Him that, like you, I may persevere in love and courage until the destined end, whatever that may be, should find me. May I fear only that which kills the soul, never that which only afflicts the body. May I always have the courage to confess my faith before the world. Amen.