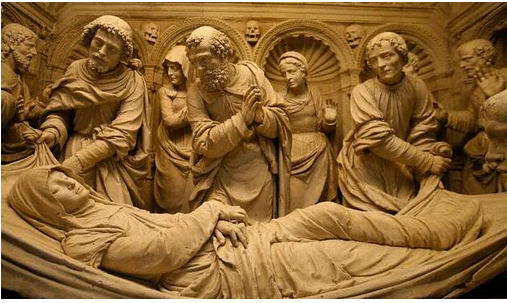 In the Maronite tradition, which is a Syriac tradition, we celebrate on 15 August each year, what in that language is called 3eedo shoonoyo. This is known in English as the “Feast of the Assumption,” and is expressed in Arabic, as al-intiqāl.

The words shoonoyo and intiqāl are not completely identical either to the “Assumption” (“the being taken up”) or to the “Dormition” (“the falling asleep”) of the Latin and Orthodox traditions respectively. Rather, they mean “the change of locality,” “the transfer,” “the transition” and “the transit.” (A Compendious Syriac Dictionary and Wehr’s Dictionary of Modern Arabic, 995). There is no difference between the Syriac and the Arabic, except that the basic sense of the Arabic verb is “to move,” while the fundamental meaning of the Syriac verb shno is “to change.”

Does this make a difference? Yes, not in that it is somehow a contradiction, but that it adds an element, the element of mystery. An “Assumption” or taking up is a straightforward conveying, a clear case of travelling from here to there. But a “transition” or a “translation” is less clear. It does not involve movement, or rather it seems to abstain from saying that anything was moved in a mechanical way. It seems to suggest the disappearance of Our Lady’s body from this world, and its reappearance in heaven. It is not denying that Our Lady was taken body and soul into heaven. It actually reinforces and confirms that idea. But it does say that the means of this change of place was mysterious. We cannot pin down how it happened. We know that it was miraculous, and so we leave a veil of silent wonder around it by speaking about it in multiple ways, none of which is intended to be exclusive or definitive.

This is consistent with the qolo of the Feast of the Assumption, when it speaks of Our Lady leaving this world, and of her being resurrected (qāma). References to her being assumed are actually translations of the word intiqāl, which as we have seen, does not mean that, although it does refer to the Feast known in European languages as the Assumption. If you read the Arabic, it is full of references to “crossing over” (e.g. in the 3Etro it has 3uboor). Then, also, in the oldest Syriac texts used today, there is a reference to her being carried by angels!

So multiple expressions are necessary, because the mystery is beyond human expression.

The Woman Clothed with the Sun

One might ask then, why not say nothing at all?

The answer is easy – it is because we are moved by the strength of our faith to speak of this great mystery which occurred in the world some two thousand years ago. This miracle so astonished the surviving apostles, and especially he who knew her best, St John the Beloved, that he showed her in heaven, clothed with the sun, crowned with twelve stars, and standing upon the moon in Revelation (Apocalypse) 12.

Attempts to interpret this passage often fail when people stray from the simple typology of the passage, and ignore the tradition, which understood it better than anyone else. Let us look at it:

A great sign appeared in heaven: a woman clothed with the sun, and the moon under her feet, and on her head a crown of twelve stars; and she was with child; and she cried out, being in labour and in pain to give birth. Then another sign appeared in heaven: and behold, a great red dragon having seven heads and ten horns, and on his heads were seven diadems. And his tail swept away a third of the stars of heaven and threw them to the earth. And the dragon stood before the woman who was about to give birth, so that when she gave birth he might devour her child.

And she gave birth to a son, a male child, who is to rule all the nations with a rod of iron; and her child was caught up to God and to His throne. Then the woman fled into the wilderness where she had a place prepared by God, so that there she would be nourished for one thousand two hundred and sixty days. …

And when the dragon saw that he was thrown down to the earth, he persecuted the woman who gave birth to the male child. But the two wings of the great eagle were given to the woman, so that she could fly into the wilderness to her place, where she was nourished for a time and times and half a time, from the presence of the serpent. And the serpent poured water like a river out of his mouth after the woman, so that he might cause her to be swept away with the flood. But the earth helped the woman, and the earth opened its mouth and drank up the river which the dragon poured out of his mouth. So the dragon was enraged with the woman, and went off to make war with the rest of her children, who keep the commandments of God and hold to the testimony of Jesus. (Apocalypse 12:1-6, 13-17)

Now some people interpret the lady here as being Israel, and others as being the Church, and both are correct,  but at the same time both are limited. The Church, which has always interpreted the woman as being Our Lady has the complete and correct answer, because if the lady who gives birth to Jesus is not Mary, then neither can she be either the church nor Israel, for if the Lord Himself was not incarnated of Mary then He was neither the scion of Jesse the Israelite, of the House of David, nor of the Church.

As the Apocalypse dramatically shows, the woman and the rest of her children (you, I and all the faithful) were and are the subject of a great persecution. This, incidentally, ties in with the title of Our Lady, Queen of Martyrs.

The unity of all these diverse themes: the Motherhood of Mary, her being the Mother of God (yoldat aloho or Theotokos), her representing the new Israel which is the Church (the twelve stars about her head), and her shoonoyo into heaven, can be and in fact are tied to the one figures through what we known as typology.

Typology and Our Lady

Typology is the distinctively Syriac (or rather Semitic) approach to theology. It is found in the New Testament, especially in St Peter and in St Paul, but also in St John and the Gospels. In this respect, there is an entire chapter on typology in my book An Introduction to the Maronite Faith. Even more valuable is the chapter “The Ladder of Symbols” in Sebastian Brock’s classic The Luminous Eye.

Precisely because Mary was the Mother of the Lord, and because she was translated to heaven, as the Catholic Church teaches, she is like the sun (with which she is clothed), shining at once in many places at once, with a light which diffuses itself throughout the atmosphere. Not for nothing did the great poet G.M. Hopkins reveal his Maronite background when he compared her to the air we breathe! So it is not just a question of having to choose one exclusive interpretation for the lady clothed with the sun. Further, as typology is based upon the actual real life of the Lord, His Mother and the Apostles, and His Sacraments, the various types of symbols would be arbitrary fictions unless they all pointed to the true God and His Mother.

Because her role is heavenly, and not merely earthly (notice that St John is explicit that the sign of the lady appeared in the heavens, en tōi ouranōi, 12:1 ) she can possess several roles at once: Mother of Christ, of the Church, of martyrs and of all the faithful. Typology is a way of seeing the heavenly models in earthly images. Just as with Mary, even more so with the Lord, we can see Him in all of creation. As St Ephrem wrote:

Creation gives birth to Christ in symbols, as Mary did,  in the flesh. (cited in Brock, Luminous Eye,  56.)

This has a practical value: when you see any lady, any mother, any persecuted person, any member of the Church, there is something of Our Lady to be seen in them; not everything, for none of us possess her perfection, but something. And it is that, the sharing in the divine type, which we can learn to respect more, and will ultimately lead to a love for all our fellow creatures. Often one feels that the typology of Our Lady conveys a feeling of gentleness, peace, warmth and love which is unique.

In a very real way, and typology is based on reality, not fantasy, our experiences are antetypes or shadows of Our Lady’s experiences. As Brock states:

Let us close with this wonderful prayer from the Syriac night prayer based around the mawrbo nfsh(y) l-moryo (“My soul magnifies the Lord”) or “Magnificat”:

Praise be to the one who is worshipped and glorified, who has magnified the remembrance of His Mother in heaven and on earth. He has made the memory of his saints known in all the nations and poured the dew of mercy and compassion on the bones of those who sleep in the true faith. To Him are glory and honour worthy at this hour of our nocturnal prayer for forgiveness, and in all feasts, times and ages and all the days of our life forevermore. Amen.

May her prayers always be with us.