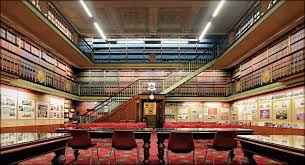 This is my speech at the book launch for An Introduction to the Maronite Faith, Parliament House, NSW, 13 February 2018. It took place in the decorous Jubilee Room (pictured).

The impulse for this book, the spiritual source from which it flowed, was an experience I had when I was three years old. It is my earliest clear and sequential memory. I was at home in Rydalmere, and my father and one of his cousins were putting up decorations around the living room. I asked my father why he was doing this.

I don’t recall his exact words, but I do recall that he told me the story of the Nativity of the Lord, and that he said something about God in heaven. Immediately, I had one of those mystic experiences which only children can be granted and not interpret or distort.

I saw, as it were with my eyes, that God was indeed in heaven, and that he was also here, watching us with a sight which touches us, and enfolds us within himself.

The influence of that vision was very strong in my childhood. I sensed the presence of God working in many places and in many beloved people, and not least in the wind and the sky. It was not that my grandmothers or anything in nature were God, but that there were qualities which came through them, which found their origin in Him.

I also felt this particularly strongly on the rare occasions my father would take me in to St Maroun’s, Redfern, for the Maronite divine liturgy. I recall him holding me up so that I could see the elderly priest swinging the thurible, as incense filled the sanctuary. And I remember thinking that the Holy Spirit must live in this cathedral, for there was something especially august, especially solemn and especially sacred here where God was worshipped in ancient ways. Each morning, my mother took me the local Latin Tridentine Mass at Rydalmere, and I was devoted to it. The vision of the spirit of God was strong upon me, when I was a child.

And then, of course, the strength of the vision faded. It did not disappear, but it did lie unremembered for some time, periodically being revived, leaping up, but then dying down again. I did not understand it at the time, and I do not wish to enter into that subject now, but it took me a very long time to be able to grasp what had happened, and to find my way back to a rational adult vision which corresponded to the child’s spontaneous opening.

It is sufficient to say that to come to home, as it were, to that faith which was my authentic faith, I had to rediscover the uniquely Maronite traditions and religious culture. Our faith is expressed in our religious culture, and a lack of religious culture expresses a lack of faith. In the ancient world, in Mesopotamia, Egypt, Phoenicia and Israel, even before the advent of Greek science, they had mathematics, engineering, medicine and law. But they did not value only that knowledge which could be analysed, or those arts which could be traded. It was understood that the very highest domain was the divine, and that it showed where everything else belonged. The cosmic truths were those which assigned a place to reason and to sensibility, which showed the proper scope of analysis, and without contradicting rationality, where science ended, and why.

This book is written in that ancient Eastern tradition. It uses logic, and never, I believe, offends it. But it also uses the art of typology, which sees and interprets the divine design and pattern which is within creation. It attempts to explain in analytic terms, why faith in the Judaeo-Christian revelation is reasonable. Briefly, the nature of the divine-human relationship is such that God does not desire to compel belief. He graciously and deliberately leaves to humanity the act of faith. Faith is not blind belief. It is the highest reason, a mixture of mind and feeling in which the whole person, heart and mind, must be engaged, so that we act as one integrated whole. A weakness in faith means a lack of integration between mind and heart, and hence an internal division which must be harmonised, or suffered, or else denied.

For example, there is not, and cannot on this view, be an overwhelming argument for the existence of God, but there are considerations which show that the faith is reasonable and satisfies our internal yearnings for a purposeful and constructive aim in life, providing a meaning for our existence, sustainable standards for ethics and morality, and indeed, provide meaning even in death, and hope not only for our world, but for all the world.

The Eastern way is not so much to argue as to tell a true story, the history of Jesus who was born, lived, died, and was raised again – his disciples accepting death because they could not deny what they had seen.  One can read the Gospels and ponder the words and example of the Lord. He claimed to be bringing in his person a revelation, and to be authoritatively interpreting the revelation which had preceded him. Did He know of what He was speaking? Did his wisdom desert Him when He spoke of God, and described his Father’s qualities? Can one read the Gospels with a sincere heart, and not hear the voice of truth?

So this work represents the efforts of an adult to explain what we believe, and why the mystic vision is true, even if it cannot be analysed. In the Maronite tradition are to be found prayer and contemplation, rituals and gestures, a culture of adoration in music, architecture, incense, tradition and truth. it is only the truth of the revelation which imparts to the sacred tradition its power.

That experience of childhood began to forge the relationship with God which brought me into the priesthood. And that experience led me to this book, not that the experience is ever mentioned in its pages, but that it was the impulse which led me to ask: how can I explain something at least of the faith?

As I was teaching classes preparing people for adult baptism, this is the approach I moved towards: the presentation of the basics of the faith in a manner which might, eventually, open a door in the mind through which the mystery might enter. Not to write something cut and dried like a catechism, but to present analogies and likenesses from everyday life to which the spiritual could be compared, at least as a starting point.

Every experience, even a mystical, needs a starting point. A person may be weak in the faith, or even lacking, but they can – if they have even an open mind – feel the strength of the Lord’s faith on every page of the Gospels, and from this, they can learn the reality of faith.