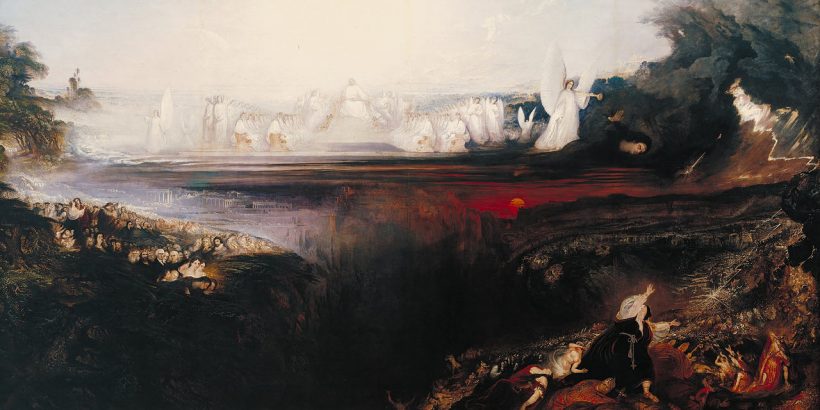 The Book of Revelation (“the Apocalypse”) is itself so astounding, almost miraculous a book, that one could fairly evoke it as a itself confirming us in the rationality of our faith. When I was a child of about twelve, a large red bible turned up in our house. I was fascinated. The last section in it was called “The Apocalypse”. What, I asked my mother, is an “Apocalypse”? “It is a Greek word which means,” she accurately replied, “what had been hidden away, what is now revealed”. My fascination was increased. I couldn’t follow, beyond the first few pages, the story I read. Yet, at the same time, I understood it perfectly well: heavenly secrets were being revealed, and the dazzling radiance they gave off was deliberate. Even as a child, I realised that it was not right that such treasures should be easy to comprehend. One had to work for them, by cultivating the spirit of wisdom. They key would be from above, not from ourselves, I felt. Of course, I was spellbound. Over the ensuing years, I have never once lost my awe before it, or the feeling that deep truths lay hidden beneath the surface of its enigmatic words. A great man I knew would frequently quote from it, opening new perspectives  onto it, making it an immensely practical book. For example, when the Lord says: “Behold, I come quickly, and my reward is with me”, what does he mean? My teacher would say that it meant that when I make an effort to raise my state, a new presence appears, a new force begins to operate in us, and that is its own reward and justification. This supports rather than supplanting the Christian interpretation, for the presence is God’s, and the force is grace.

Recently, after many years of dabbling in it, I decided to look at the Apocalypse more seriously. I began with Wilfred Harrington’s commentary in the Sacra Pagina series. It is a worthwhile volume. He notes that the very earliest testimony about Revelation, that of Justin Martyr, writing about the year 150, was that “… John, one of the apostles of Christ, prophesied in a revelation vouchsafed to him …” That is, the very earliest external evidence was that John the son of Zebedee had been a prophet, and had recorded a prophecy he had received. This is significant: today, most commentators forget that John did not claim to have invented the vision, but to have been privileged to see it and to write it down. It should not surprise us that he had to find the words for what he had seen.

Harrington went on to say that the very earliest commentators accepted this identification of the author of Revelation as being John the Apostle. It is an impressive list: Irenaeus, Clement of Alexandria, Hippolytus, Tertullian, Origen (who explicitly said that one and the same John wrote both the Gospel and this book), and the Muratorian Canon. The contrary voices were raised only when the heretical and schismatic Montanists appealed to the book. A gentleman named Gaius argued that neither the Gospel nor the Apocalypse had been the work of St John. Quite clearly, Gaius did not want to believe that the apostle had written them, and he framed his arguments accordingly. Later, others who also wished to see the Apocalypse neutralised, joined in and argued that the same person could not have written both the Gospel and Revelation.

Yet, despite being fully aware of the tendentious and ad hoc nature of the attacks on Johannine authorship, and the unanimous early testimony in his favour, Harrington goes on, without serious argument, to accept the modern view that it was not written by St John the Apostle and Evangelist (8-9). This is a disappointing lack of scholarship. Michael Michael wrote a thesis at Macquarie University in about 1998, where he demolished the arguments against the authorship of John the Apostle. It won him the University Medal, if I recall correctly. It is a shame it is not better known. But yet, I accept that it was the vision of St John, who was also the Apostle and Evangelist.

So what does the Book of Revelation say? First, let us ask what it does. It closes both the bible as a whole, and the New Testament. Thus it is the bookend of both. It states the ultimate because final meaning of the Bible, that is, of the story which began with God’s creation of the world, reached a climax in the Incarnation of the Lord, and shall be consummated in the final drama.

Richard Bauckham’s superb The Theology of the Book of Revelation.