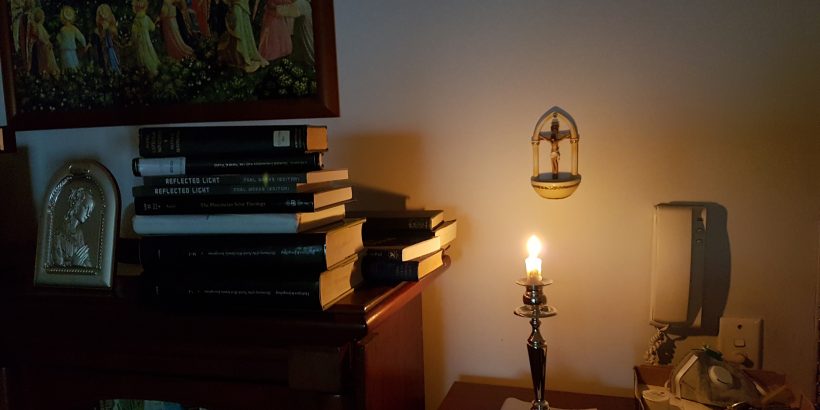 “After six days Jesus took with him Peter, James and John the brother of James, and led them up a high mountain by themselves. There he was transfigured before them. His face shone like the sun, and his clothes became as white as the light. Just then there appeared before them Moses and Elijah, talking with Jesus. Peter said to Jesus, “Lord, it is good for us to be here. If you wish, I will put up three shelters—one for you, one for Moses and one for Elijah.”

“While he was still speaking, a bright cloud covered them, and a voice from the cloud said, “This is my Son, whom I love; with him I am well pleased. Listen to him!” When the disciples heard this, they fell facedown to the ground, terrified. But Jesus came and touched them. “Get up,” he said. “Don’t be afraid.” When they looked up, they saw no one except Jesus.” (Matthew 17:1-8)

“Extraordinary,” is too weak a word for the Glorious Transfiguration. Yet, it was not that something new happened to Our Lord, although we may think of it like that. Rather, the eyes of the disciples were opened so that they could see the reality of the Lord, as He always had been, as He still was, and as He shall always be. That was the miracle: that Peter, James and John should, for the first time, be able to gaze upon the luminous Truth in its eternal splendour. Meanwhile, we are like people unable to hear heavenly music because of wax in our ears. When will we pray Him to remove the wax?

St Jacob of Serugh tells us that Our Lord manifested His glory at the Transfiguration, so the apostles might be supported by its memory when He was crucified. The miracle was to “confirm their minds,” and show that: “The sun and radiance of that righteousness which we saw would not be held captive by the shadow if He did not desire it.” He accepted to suffer.

The light with which Our Lord shone was not borrowed from somewhere else, but was the very light of the Lord Himself, only now revealed to them for the first time: “In Him there was light, although it had been covered, but they had not been aware.” This revealed that Our Lord was in fact the light of the world. St Jacob writes:

“Neither transformation not change affects Him, because yesterday and today and forever, yet He is the same” (193-194).

Later, St Gregory Palamas states: “Indeed, not only will Christ be eternally thus in the future, but He was such even before He ascended the Mountain. Hear John Damascene who is wise in divine things: Christ is transfigured, not by putting on some quality He did not possess previously, nor by changing into something He never was before, but by revealing to His disciples what He truly was, in opening their eyes and in giving sight to those who were blind. For while remaining identical to what he had been before, He appeared to the disciples in His splendour ….”

St Gregory relates this to our lives and struggles as Christians: “… the transformation of our human nature, its deification and transfiguration – were not these accomplished in Christ from the start, from the moment in which He assumed our nature? Thus, He was divine before, but He bestowed at the time of His Transfiguration a divine power upon the eyes of the apostles and enabled them to look up and see for themselves. This light, then, was not a hallucination, but will remain for eternity, and has existed from the beginning.” (Triads, 3.1. 15).

The significance of the Transfiguration only begins with the revelation. St Jacob of Serugh ponders the presence of St John and Moses at the Transfiguration: “(Christ) wished to confer the key of Moses upon John in order to give him at the beginning to write spiritually … that he also should become a great teacher of the hidden mysteries of the divinity.” Just as Moses was inspired to write “In the beginning” at the commencement of Genesis, great St John was here filled with the grace and wisdom to write “In the beginning was the Word …” Likewise, the authority of Elijah was given to St Peter.

Our Lord “called the apostles and brought the prophets to treat them as equal, so that He might manifest the single teaching of truth to the whole world” (231-232). The Transfiguration shows that the two Testaments are united in one divine economy: “Up to then the Prophets escorted and brought the great treasure, and they rested so that it might proceed forth to the world through the apostles. The wearied ship of prophecy carried the mysteries. As if to a haven which is full of peace, it reached Our Lord” (355-358).

Further, on the mountain, Our Lord explained His forthcoming crucifixion: “The road of suffering is right for You to walk on so that You may take up all the passions of Adam when You suffer” (391-392) Syriac thought takes this sort of detail from its understanding of the deeper typological meaning of the Feast: all suffering and all glory is found in the life of Christ.

The glory of the Transfiguration was a necessary part of the entire life of the Lord. It revealed to the key Apostles the mystery of the Incarnation. It shed light on the scandal of the Resurrection, and foreshadowed the wonder of the Ascension. It unveiled the Life which could never be conquered by Death; and manifested the glory of heaven upon the earth. It showed the true relation between the Old and New Covenants and Testaments which were unfolded from the One God. Then, when the vision was complete, Our Lord touched them and told them not to be afraid. The glory passes, but the touch of God and the call to take courage remains.

The Transfiguration of the Lord is not just some other Feast: it is wondrous symbol of the entire divine plan of our redemption and salvation. No surprise, then, that the Syriac Churches used to have a Season of the Transfiguration from 6 August to 13 September.

Our Eyes Are Closed, Our Ears Are Shut

There is a simple rule: we see the goodness in God and in His creation in inverse proportion to our involvement in sin and in negative emotions. A person who is lost in sin cannot see God. If he even believes in God, he will reject Him, and being a rebel against God, how can he possibly feel the reality of the supernatural? How can he possibly share in the Transfiguration? So too, anxiety and complaining cut us off from God. Even if they are not always straight out sins, they encase us in a straightjacket of our own making: we cannot join in the grace of the creation, we cannot lift our hearts to God; our prayer can only be selfish, or at best cool.

So,  we cannot enter into the spirit of the Transfiguration because our eyes are closed and our ears are shut, our hearts are cold, and our minds are narrow. When we celebrate the feast this year, let us pray the Lord to purify our senses and to lift our sight to the true vision of His divinity. Then, acknowledge His touch, and be not afraid.