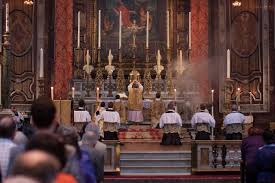 Organic Development of the Liturgy

What, then, is “organic development of the liturgy”? At p.26 Reid sets out the following matters:

Reid later mentions other aspects of the principle of organic development, which I would collect as follows:

As a mark of organic development, rather than an intrinsic part of it, and in theology rather than liturgy, Reid later cites St John Henry Newman to the effect that a doctrine is more “likely to be a true development, not a corruption, in proportion as it seems to be the logical issue of its original teaching.” (p. 69) Reid also notes that there is inorganic development of the liturgy when innovations are “imposed from above.” (p.141)

I think the real difficulty in finding a clear and concise definition of “organic development of the liturgy” is that the adjective “organic” is here used metaphorically. A liturgy cannot really develop either organically or inorganically. The eighth edition of the Macquarie Dictionary states that something can be described as “organic” when it is “characteristic of … living organisms … (or) exhibiting the sort of interconnectedness characteristic of the parts of living organisms to the whole …” The Oxford Dictionary of Word Origins informs us that since the mid-19th century, the word “organic” has meant “without the use of artificial chemicals.”

It seems to me that this is the nub of the issue: that the development of the liturgy can seem more or less artificial, i.e. not natural. No shining line can be always drawn between the natural and the artificial. Many of Reid’s criteria for organic development are matters of opinion. The most subjective of all is probably the first: “necessary for development.” Necessary from what perspective, or for what aim? It is an unworkable criterion: which innovator does not say that his innovation is necessary?

What is the practical value of the criterion of “respect for tradition”? If it means that liturgy cannot be changed that is one thing, but if it allows changes to the liturgy, which changes? Adding the word “profound” does not help: all it does is invite the innovator to generate the appropriate words to affirm his “profound respect.”

I could continue along these lines, but I think the point is clear: Reid’s attempt to produce a workable definition or even a useful description of “organic development of the liturgy” cannot be said to have succeeded. The best he can do is suggest what the terms of the debate should be.

An important part of the book is the argument that the Liturgical Movement of modern times began as an attempt to educate the faithful in the liturgical dimensions of piety, but eventually became a rush to reform the liturgy. The problem for Reid is that the innovators suggested that their reforms were needed in order to increase liturgical piety.

The most important insight of all may be St Thomas Aquinas’ statement that to make any change is to weaken the force of custom, and hence of the law: “Human law is rightly changed, in so far as such change is conducive to the common weal. But, to a certain extent, the mere change of law is itself prejudicial to the common good: because custom avails much for the observance of laws … (so) when a law is changed, the binding power of the law is diminished, in so far as custom is abolished.” (pp. 30-31)

The first time I read this, I received a shock of understanding: it was so true, and also so little known. But while it has some force in civil and criminal law, it is even more true in the case of liturgy, because (1) the liturgy and the liturgical act of worship relates to God, who is not subject to change and the vicissitudes of fortune, as the regulation of society is, and is based on the historical fact of the salvific work of the Lord; (2) the soul of man is created by that same unchanging God, and has the same needs throughout time – to know, love, and serve Him. The central truths of the faith cannot change, and preserving the liturgy which expresses them unchanged is the ideal way of maintaining the unity of the faith over time, despite the changes in society and history. The liturgy can and should preserve a specific understanding of the Eucharist, an understanding not subject to passing intellectual fads and fashions. Much can be said of this, but see the passage from Odo Casel on pp.120-121.

Let me take one final matter, the question of the vernacular. It is, it seems to me, an unreal mind which thinks that there is, in all communities, one vernacular. It was, I think, specifically a view held by Europeans of the nineteenth and twentieth centuries, and those imbued with their views. How can it be that no one ever asked the simple question: which vernacular do you want us to say the Mass in? Thank heavens the Maronite liturgy preserves central parts in Syriac. I might suggest that the Epiclesis and the Our Father might also be prayed in Syriac, perhaps also the ya qurbanan shahiyyan. We have people come to the (mostly) English Mass at Maronite Churches because their local Latin Church is having a Mass in some language they do not understand. The Latin of the Traditional Mass publicly expressed the universality of the Catholic Church, and worked to preserve it at the most sacred moment of manifesting Catholic identity.

I don’t think that anyone intellectually interested in the Catholic liturgy can be without this book. Yet, I also think that ultimately, despite the abundance of interesting and even valuable facts in this volume, it fails in its attempt to delineate what organic development of the liturgy may be, in a way that can settle any controversy. It may well be that the only real criterion is tradition and allowing only minimal changes, and that very rarely. That means little or no change. But perhaps that is exactly what is best, for as St J.H. Newman said: “… the forms (of the liturgy) are not directly from God, still long use has made them divine to us; for the spirit of religion has so penetrated and quickened them, that to destroy them is, in respect to the multitude of men, to unsettle and dislodge the religious principle itself. In most minds, usage has so identified them with the notion of religion, that the one cannot be extirpated without the other.” (68, my italics)