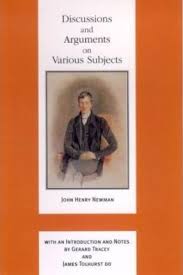 “The Tamworth Reading Room,” pp.254-305 in Discussions and Arguments on Various Subjects, edited with an introduction and notes by Gerard Tracey and James Tolhurst, Birmingham Oratory Millennium Edition, 2004.

What do we need in our lives? Will studying science make the average person any better? Can it induce us to be more religious people? Can modern education replace religion altogether? Will we better off if science replaces religion? It is perhaps more precise to ask whether we will be improved by adopting a scientific way of thinking instead of a religious one? And now we pose the question, is there any need for us to be better at all, and if so, what means should be employed for improvement?

These were the questions tackled by St John Henry Newman’s brilliant series of seven letters written for The Times, under the pen-name Catholicus, between 5 and 26 February 1841, as a response to some statements made by Sir Robert Peel at the opening of the Tamworth Reading Room.

These institutions were different from the reading rooms we know today, which are those parts of a library separate from the book stack, where people can study in quiet. The Tamworth Reading Room was something like the cafe in a modern bookshop. It was part of a library, and allowed members to either read on site, or else to borrow books. It was intended to have “plain and popular lectures … upon such subjects as Astronomy ­ as Chemistry – as Botany – upon recent improvements in Arts and Manufactures; and upon the application of Scientific Discoveries (etc.) …” [http://www.historyhome.co.uk/peel/education/tamread.htm] It was, in short, a benevolent institution to assist with adult education which would include many books on the sciences, but which would exclude what was called “controversial religion.” It was aimed at educating men and women who would otherwise not have the benefit of advanced schooling. The “Reading Rooms” were thought of as a sort of better alternative to the public house.

Sir Robert was the first Prime Minister to come from an industrial middle class background (1834-1835). Between 1830 and 1850, he was the MP for Tamworth, where he had lived most of his life; and was President of the Tamworth Reading Room’s Committee of Management. A few months after delivering the opening lecture, Pitt became Prime Minister for a second time (1841-1845). I have read his address, and it was clear that he was hoping it would provide a broad range of useful information, e.g. to help the farmers of the area to keep abreast of new developments, and to provide reliable information about people contemplating emigration to the British colonies. Pitt was keen, as he said to support the “ambition” of people of “lowly estate.” This project would further their ambition by educating them. Sir Robert also argued at great length, and with some beauty, that the physical sciences have such an uplifting effect on the mind and spirit that in learning them, a person will also morally improve as well. In other words, religion was not needed in adult education: science was enough.

Sir Robert had begun as rather a conservative politician, but had then continually deflected along more liberal lines. This was disconcerting to John Walter II, the editor of The Times, the most influential newspaper in England. Because of the strong tone of some of its articles, it was known as The Thunderer, and was satirised by Trollope, the novelist, as The Jupiter (the Roman king of the gods who threw thunder bolts). Through his son John Walter III, who had met St JHN at Oxford, and had been taken by him, Walter commissioned the letters which formed Newman’s “The Tamworth Reading Room”. It was certain that he would take issue with Pitt’s sentiments. The letters launched a polite and respectful, but direct attack on Pitt’s address, and in doing so, also traced the ideas back to their source, in the work of people like Jeremy Bentham (1748-1832), Lord Brougham (1778-1868, a high-profile political reformer), and others of a similar bent. “The Tamworth Reading Room” was as much an attack on this entire kind of thinking as it was on Pitt’s specific programme.

It is often said that when Pitt read the devastating critique from the pen of “Catholicus” unfolding, he was furious because he had not dreamt that his ideas had the implications which they did. I am not so sure of that. I do not doubt either that Pitt said that, or that he was genuinely angry at the series; after all, no one likes being criticised, and St JHN was one of the all-time great masters of analysis, critique, and powerful writing. It is also true that The Times was shaken by the extent of the controversy and opposition aroused by the letters. But controversy is a blessed curse for the media, then as now, and the series continued.

While all this is true, I cannot believe that Pitt did not know what he was saying: he was a brilliant man in his own right. He was undoubtedly stunned at the force and the irresistible nature of the saint’s onslaught. What may have happened is that St JHN and many others interpreted Pitt’s comments as being anti-religious in tendency, because they could lead to making religion superfluous, an influence which could be replaced by education, especially education in the sciences. Pitt was not positively anti-religious, but he can hardly have imagined that his sentiments did not tend to displace religion. He effectively said he was being non-denominational, but as St JHN correctly countered, he was actually being secularist.

I would sum it up this way: I think that St John Henry saw, in Pitt’s address, a very prominent sign that religion was being retired from public life, and he saw that this would ineluctably lead to religion becoming less prevalent in private life, too. Many people, Pitt included, would have probably agreed that the public aspect of this insight was accurate, but said that the private dimension did not have to follow.

This background is important, as it shows what the real issues of controversy were: what is the role of religion in modern life? And when we aim to educate the working and middle classes, what instruction should we make available? St JHN’s point came down to this: we need religious education, and a secular education which excludes religion will be not just neutral but positively destructive of religion in the long run. I think that time has proved him right.

This is why St JHN agreed to write these letters to The Times. And why it was such a great thing to make such a beautiful noise in the pages of the leading English newspaper. In Part Two, we shall examine his critique in some detail.