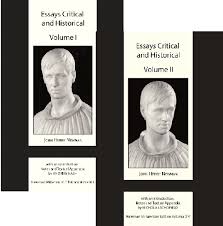 St John Henry Newman opens his review of Dr Todd’s Prophecies relating to Antichrist, by remarking how often writers “start with a prejudice … argue as advocates, and … end in a foregone conclusion” (133) He will return to this theme throughout the essay, and it is a significant one, for we all have a certain tendency to it.

Newman’s next point is equally important: prophecies are given to help us by preparing us for something which is to come. If we think it has already been fulfilled, then we have nothing more to look for – and that would be a calamity when the prophecy has not been fulfilled (135). Newman’s point is that people who believe that the Antichrist prophecies have been fulfilled in the Catholic Church will not be vigilant for the appearance of Antichrist from another direction.

Further, Newman states, the arguments that can be used to make the Catholic Church out as being Antichrist can also be used to show that any other branch of Christianity, and especially the Anglican, are also Antichrist (135-136). He returns to this later, but the simple truth is that it is easy to accuse other people of wrongdoing, and once one has started to call everything one opposes “a corruption of the Antichrist,” you do not ever have to stop: everyone can be called “Antichrist.” The saint is very wise here, for criticism, especially negative criticism, is spreading and contagious. After all, the identification of X. (this person in this prophecy) with Y. (this person or institution in today’s world) has to be a matter of bare assertion (147), and so it is almost impossible to disprove it, for it is mostly, if not completely, a matter of interpretation (149).

I shall pass over his observations that many of the alleged facts used to “prove” that the Pope is the Antichrist were actually based on incorrect statements, because the principle that falsities should not be used in argument is, in principle, universally acknowledged. More original is Newman’s argument that a person who claims to have “new or further interpretations” of scripture is implicitly claiming to “have some portions of the spirit which inspired the prophecy itself” (155). This alone should make us slow to believe these interpretations of the ancient prophecies.

Now, despite the fact that at this stage of his life, Newman was not Catholic, and even criticises the Church and its teaching in this review, he is fair enough to make the deep point that:

If once we assume that the Pope is Antichrist, then all the apparent evidences in favour of Rome only become the more convincing evidences of the truth of the assumption with which we start. Antichrist doubtless is to deceive many; he is to bring with him a plausible doctrine; he is to be very like the truth. In consequence, universality, antiquity, claim to miraculous power, sanctity, all the Notes of the Church, become but symptomatic of it being the Synagogue of Satan (157).

This insight is critical: usually, in both general life and in criminal law, a person can cite their good character to defend themselves. But if one begins from the belief that a person is the Antichrist, then no matter how much good they have done, it will not answer the charge of being a satanic deceiver. In fact, it may be the very opposite: if the Antichrist is a liar, then the more good that he seems to do, the greater the liar he appears to be – so the very evidence of the Pope’s goodness turns into positive evidence that he is the Antichrist. It is, therefore, an unfalsifiable allegation. But it is also a “startling” allegation (200) with the result that once the charge is made, it can be hard for someone to get it out of their head, especially since the allegation cannot be positively disproved.

Along the way, St JHN makes many strong points against identifying the Pope with Antichrist: e.g. the Antichrist will be worshipped, but the Pope is not worshipped, and Protestant claims that he is are wrong. But another interesting idea is that the very fact that the Church is persecuted and lied about by being called Antichrist is a mark of its being the true Church. Now, this argument could easily turn into the opposite of the one about the fact that the Church seems good proves that it is bad. If I condemn any sect, or any religion, then I could be said to be proving that they are the Church of Christ. So we have to be careful: as St JHN remarks, this argument really only goes to show that the Catholic Church could be the Church of God (and at this stage, he did not believe it to be so).

In conclusion then, we have a very well-written essay which highlights a chapter in the history of ideas: the time when Protestants regularly attacked the Church as being the instrument of the devil, if not the very devil himself. It is hard to imagine it now, because although these diatribes still go on, they are on the margins, not the mainstream. But we are, I suggest, today at risk of similar ideas and fashions getting abroad. And neither are we Catholics immune. We can see where others go wrong in their unfair blanket assaults on us: we have to be very careful not to be doing the same to them. Most of all, perhaps, we have to heed Our Lord’s words, and remember that no one knows or can know when the Last Days are coming – until the Last Days arrive – and then everyone will know and there will be no need to try and make the case.