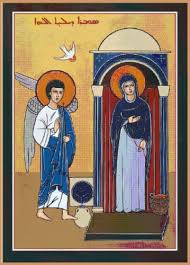 The Announcement to Mary is the second week of the Maronite Season of the Nativity or the Announcement. When we discussed the Announcement to Zechariah we said something about the calendar and its seasons. Let us go deeper into the annual seasons: the cycle of feasts, fasts, and celebrations presents to us a complete course of the life of the Lord, of salvation history, and of our situation between time and eternity.

If we prayerfully follow the calendar, our minds and hearts are gently turned, week by week, to witness another aspect of God’s action in history; we deepen our knowledge of the Lord, His blessed mother, and His saints; we ponder the mystery of death on the Sundays of the Deceased, and we join in the sadness of the Passion and the joy of the Resurrection.

If we prayerfully follow the calendar, we will always have food to nourish us: food which is familiar but also varied. We have our regular devotions, but not those and nothing else. Just as physically we need a balanced diet, so too, in the spiritual life, we need a balanced diet of prayer. Sorrow in its right time, joy in its right time, teaching of virtue and warning against evil; expectation and fulfilment. The feasts of the calendar deliver all these to us. They present the whole of the faith in a sane and accurate way: the emphasis on God the Holy Trinity, but not forgetting the angels and saints; and we remember saints of many different descriptions: martyrs, scholars, men and women of action, clergy and laity.

The liturgical calendar gives us a direction through the year, and it provides us with balanced spiritual nourishment.

The Announcement to Mary

Once more, let us begin by contemplating the icon painted by Fr Abdo Badwi. It is closely based on five ancient icons. They are all strikingly similar, and yet they are all distinctive.

Fr Badwi wrote of this icon: “The Announcement to Mary is one of the oldest themes in Christian iconography. This icon is from the same inspiration as the previous one (the Announcement to Zechariah). The Virgin is standing in front of the veil of the Temple, symbol of her virginity because she is the Temple in which the Lord was pleased to dwell, whilst maintaining her virginity. She is pulling out a string (thread) from the basket (at her feet). According to the tradition, she is weaving the veil of the Temple with the chosen virgins. Her hand gesture is a sign of reception and submission. There is a spring and a water jar near her. She preserves the water of life and gives it to us. Another Syriac tradition places the Announcement near a well. The Archangel carries a pilgrims’ rod in his left hand, and greets her with his right hand. The Holy Spirit, in the form of a dove, is a later tradition in iconography.”

At the top of the icon is written sbartō d.yōl.dat a.lō.hō, meaning “The Tidings of the Mother of God.” As with Zechariah, s.bar.tō or “good tidings” links this feast to the Gospel of the Lord Jesus Christ.

The Holy Spirit enters from the top left hand, just as the angel is shown on every single one of the five ancient icons, and this one, entering from the left. The divine therefore encounters us from other dimensions. The Holy Spirit enters from the upper left, while St Gabriel the Archangel, enters from the middle level. Note, his right foot is raised, and his left foot, which goes before him, is flat. So he has arrived from the left, but he is standing higher than the level of the jar which is catching water from the well. So, although Gabriel is addressing Our Lady from eye level, he is in fact walking on the air, and she is standing on a platform. That is, although the divine messenger comes to us, and speaks to us on our level, yet he in himself belongs to the higher world.

Our Lady stands beneath the cupola of the Temple, and behind her is the veil of the Temple. As Fr Badwi said, she is weaving that veil. There is a very ancient Christian legend, known as The Protevangelium of James, although its true name may have been The Genesis of Mary. It is the oldest surviving sustained Christian study of Our Lady. By telling her story, it provides more reverent and uplifting teaching about her than three volumes of theology ever could. It is the oldest source to tell us that her parents’ names were Joachim (Yuwakim) and Anna (Hanna).

It also tells us that Our Lady was living in the temple complex, and worked at the weaving of the veil of the Temple – the veil which separated the holiest part of the Temple, protecting it from the entry of the impure and unholy. That was the very veil which was rent in half at the death of the Lord on Good Friday. This gives evidence of the very deep thought and spiritual understanding which went into this story, because it connects her action of knitting with her conception of the Lord and His formation in the womb; and it connects the end of her handiwork (the veil) to the death of the Lord. It also connects the Lord to the Temple. In other words, possibly as early as the second century A.D., Christians had been given the grace to understand that Mary’s work was at the end of the Old Covenant and the birth of the New, that by her acceptance, the Temple (the world) was brought to its greatest perfection, and it was embodied in the Lord who died, but by dying, made life eternal. They understood that where the divine and the earthly meet, there is a curtain: the curtain hides, and it reveals: one cannot see past it, but seeing it, one knows that something is hidden. And so the search is over when we reach the final veil, because behind that veil is God.

In terms of Syriac typology, what the Genesis of Mary is teaching, although as a tale rather than as a catechism, is that Our Lord is the true Temple, and because the Temple is the Universe, He is the essence of all the Creation. This also means that when we read the Bible, we can read Our Lord as the Temple, and as all the creation. There is a wide Creation and Temple-theology related to this, but I wish to pass on to just one more feature: the well and the replete jar.

Why, in five out of our six icons, does the iconographer draw the well as if it were a sort of tunnel of blue emerging from a box? That is not how wells look: they are openings in the earth, and in the ancient Near East, they were often circular brick structures with a rope going over the side so that buckets can be lowered in. So why this strange way of drawing the water?

I think that the answer is found in ancient Egyptian art. Although the Egyptians usually depicted water by drawing wavy lines, when they drew pools and wells, they were often depicted similar to what we see in this icon. They usually painted objects by showing them not as we see them when looking at them, but as we do when thinking about them: e.g. showing the entire eye, and not just the little part we see. So here we see the surface of the water, even though it is shown unrealistically above the level of the jar, as if it dripping water into the jar, when in fact the jar would have to be lowered into it. In Reading Egyptian Art, Richard H. Wilkinson explains that water was, for them, “the primeval matter from … all things arose; and the pool could thus signify the primeval waters of the First Time” (137). I think this gives us another clue to the reason water is shown here: according to typology, the waters of the earth are the waters of the creation – and the Lord is about to be incarnated, created in human form. In the presence of Mary, the jug is being filled: the creation is flowing from the source into this world in a special form.

Just as the wool took form as the veil of the Temple, so the water takes form when it flows into the jar. So too, the Lord takes form in the womb of the believing maiden. This icon, then, is an icon of the mystery of creation: through the Holy Spirit, through water, and by the faith of the Virgin.