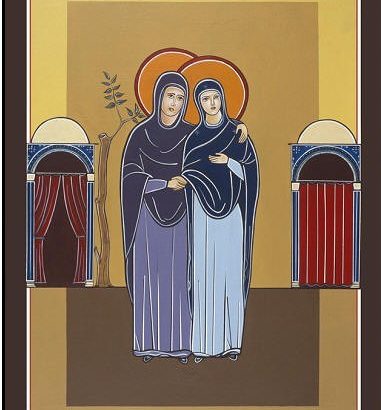 Mary’s Journeying, or in Western Christianity, the Visitation of Our Lady to her Cousin Elizabeth is the third week of the Maronite Season of the Nativity or the Announcement. It is a little surprising to realise that in the Syriac interpretation, this Sunday is an integral part of the Season of Announcement, not only because it follows the announcements but more deeply because it is itself the announcement of the Incarnation to Elizabeth and to John the Baptist. The emphasis in the Syriac tradition is not on visiting, it is on travelling to proclaim the conception of the Lord.

In other words, the Syriac presents Our Lady as the first apostle, the first to be sent forth to declare the mystery of salvation. Just as “apostle” means “the one sent forth,” so in this week we honour Mary as “the one who went forth.” This is the very meaning of the Maronite icon: it is called mi.zal.tō d.mar.yam, meaning “Mary’s Journeying.” The word mi.zal.tō means “journey, departure, pilgrimage.” It can even be used of the final voyage, into eternity. It actually does not mean “to visit:” that is another word altogether in Syriac, s.3ar “to visit, inspect,” which is used, for eample, when visiting the sick. When a chorepiscopus visits his area, that is a sō.3ou.rou.tō, or “visitation.” The noun mi.zal.tō however, comes from an entirely different verb, e.zal, which means “to go, walk, journey.”

Now, of course, a person who makes a visit does also go on a journey. But not at all who go travelling are visiting. Further, the emphasis is different: in the case of visiting it is on one person dropping in on another – at least two people are directly concerned in a visit. However. when we speak of a journey, only one needs to be involved. That is, the emphasis is quite different: in one instance we emphasise that the traveller has gone forth, and we draw attention to her journey. In the other, we emphasise the meeting.

Why, when the Syriac mind contemplated this episode from the Gospel of St Luke, would it think of Mary’s making a journey as the more revealing title than the fact of her visiting her cousin? One reason might be that the Syriac New Testament reads like this: qō.mat deyn Mar.yam b.houn b.yaw.mō.tō hō.noun: we. zalt b.Tee.lō.yeet l.Tou.rō lam.deen.tō dee.houd (Luke 1:39). “She arose, Mariam, in those days, and she journeyed instantly to the mountain, to a town of Judah”, the verb “to journey” being e.zal. So, in calling this episode “Mary’s Journeying,” the Syriac tradition follows the text of St Luke very carefully indeed. In neither the original Greek nor the Syriac, do we find either the words “visit” or “visitation.”

But I think there are two further reasons: the first is found in the Maronite Beit Gazo, a treasury of medieval Maronite hymns and religious literature. Fr Badwi quotes this part of it:

The young girl whispered gently in the ears of the aged woman.

The voice crept in, entered, and impelled the Forerunner of the Truth (John the Baptist).

The child leaps for joy before the Son of David (Jesus),

(David) who danced in front of the Ark.

He kicks his mother to go out, and to adore,

so that his Lord who has come to visit him is not kept at the door.

This passage is taken directly from St Jacob of Sarug’s first Homily on the Nativity, 497-502. I have consulted both that text and the Syriac in Beth-Gazo Maronite Add. 14.701. The passage is not an easy one in the Syriac, but the overall meaning is clear, and is fundamental to Syriac interpretations of the Journeying (Visitation): Mary is the Ark of the Covenant, and her journeying to Elizabeth is the type of the journey of the Ark of the Covenant in the Old Testament.

Here the Ark of the Covenant (the box containing certain holy items, and being a sign of the presence of God) is taken for three months because of David’s fear before returning, and brings with it blessings. In St Luke, the Ark of Covenant, Mary, bearing the presence of God, goes to her cousin’s house for three months, fearlessly making the arduous journey, and brings with her blessings. St Luke is showing us the true meaning of the Old Testament stories, and how all of sacred history, read typologically, shows us the Lord.

Fr Badwi’s icon was based on an ancient Syriac picture available in the Vatican Library. The Virgin and her cousin stand in front of two houses: the Virgin’s house with a closed veil, symbol of her virginity, and nearby, Elizabeth’s house. In front of Elizabeth’s house is a fry tree, which would appear to be dry and withered but for the green branch sprouting from it. This is, Fr Badwi explains, a symbol of the barren woman who will give birth.

I would add that, although Fr Badwi has placed in front of Elizabeth’s house, the dry tree with the green branch unexpectedly sprouting, it could quite rightly have been placed in front of both houses, for St Ephrem writes in his first Nativity Hymn: “The staff of Aaron sprouted, and the dry wood brought forth – his symbol has been explained today – it is the virgin womb that gave birth” (line 17). Ephrem is referring to the story in Number 17 where, during the Israelite wandering in Sinai, twelve staves of twelve leaders were deposited in the Tent of Meeting. The next morning, Aaron’s staff had produced blossoms and ripe almonds, showing that the Lord had chosen Aaron and his sons to be responsible for the priesthood (Numbers 18:1).

Now, St Luke tells us that Elizabeth was of the house of Aaron (Luke 1:5). So the dry tree which miraculously blossoms is a fit sign of her. But, the ancient system of thought which we call typology can handle this: the tree which gives forth life when it did not seem possible is both aged Elizabeth the daughter of Aaron who had been barren, and the young Mary the daughter of David who was ever-virgin. And so the houses of Aaron and David, the kingship of the one and the priesthood of the other, the old and the young, the hills (Elizabeth) and the plains (Mary) are brought together in one mystery. Words cannot explain this uniting of opposites and differences: but the symbolism of the artist can present it to the eyes so that it can be read by the faithful soul, interpreting by the light of the Spirit.