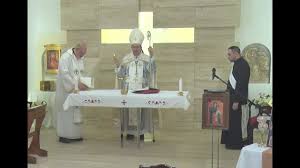 First, the word “awe” has been cheapened by the fashion of using “awesome” as a filler when we don’t have a better word to say and want to sound impressed. But what I am going to speak about is truly awe-inspiring; so let me begin by saying that the word “awe” means “respectful or reverential fear, inspired by what is grand or sublime.” This is certainly not too strong for what I am going to speak about.

Second, the Divine Liturgy, also known as the Divine Sacrifice, the Eucharist, or for convenience, the Mass, is – as a whole – a supernatural action, not merely a community performance or people saying certain words and making some actions. The difference is significant, and although unfamiliar to many people, it can be grasped. To speak of the Mass as an supernatural action is a good way of emphasizing that what occurs during it, and which is of most value, is the work of God.

Our Lord said: “Do this in memory of me.” The operative word is “do.” The central action is performed not by the priest but by God Himself. No priest has the power to change the offerings of bread and wine into the Body and Blood of Our Lord. But through prayerfully and reverentially following the rite, with the correct intention, he can cooperate with the divine action.

This brings me to the first “awe-inspiring” moment in the Divine Liturgy: when after the Institution Narrative, the priest speaks in the very person of Our Lord Himself, saying:

Whenever you eat this bread and drink this cup, you do so in memory of me until I come again. (Anaphora of the Twelve Apostles)

Do this in memory of me. For whenever you eat this bread and drink this cup, you proclaim my death and profess my resurrection until I come again. (Anaphora of St James)

Do this in memory of me. For whenever you eat this Body and drink this Blood, you proclaim my death until I come again. (Anaphora of St John)

Whenever you observe these commandments, you proclaim my death and resurrection until I come again. (Anaphora of St Mark)

Do this in memory of me. Each time you eat this bread and drink this cup, you remember my death until I come again. (Anaphora of St John Chrysostom)

Do this in memory of me. For whenever you gather in my name, and eat this bread and drink this cup, you remember my death and resurrection until I come again. (Anaphora of St John Maroun)

As often as you shall do this, you shall do it in memory of me. (Haec quotiescumque feceritis, in mei memoriam facietis) (The Canon of the Mass according to the Missal of St Pope Pius V)

I have quoted these from each of the Anaphoras because there are some thought-provoking differences between them, which just goes to show why it would be even better if we regularly used the various Anaphoras.

I repeat the importance of this, because it is easy to miss. In the Mass, most of the words spoken by the priest are addressed to God: sometimes to the Trinity together, sometimes to the Father, or the Son, or the Holy Spirit. But in these words, the priest is not just reporting what the Lord said, but is speaking in the very person of the Lord Himself.

When the priest prays the words of the Institution Narrative, he is reporting what the Lord said, and so he is quoting Him. But in these words of memory, the priest does not preface them by any such statement: he becomes the very lips of the Lord. In all these Anaphoras, and in the traditional Latin Missal, there is a break between the reporting and these words.

If that is not enough to send a tingle up your spine, consider the Institution Narrative from the ancient Maronite Anaphora Sharar, where the priest speaks directly to the Lord, addressing Him as “You”:

(We now) make, Lord, remembrance of your passion as You taught us:

On that night on which You were handed over the crucifiers,

You lifted, Lord, bread in (lit. upon) your pure and holy hands;

You looked to the heavens, towards your splendid Father.

And broke (it); gave it to your disciples the blessed apostles;

And said to them:

“This bread is my body.

For eternal life it is broken and given.

It is, for those who receive it (in communion) for the remission of debts,

And the forgiveness of sins.

Take, eat of it, and it shall be for you unto eternal life (lit. “life for ever”).

This cup is my blood, it is the new covenant.

On behalf of many it is shed for the forgiveness of sins.

Take and drink of it all you,

It will be for you for the remission of debts and the forgiveness of sins,

And for life in the age of ages.

The last two words of the first line of the words over the chalice are translated by hakadha in the Arabic. This is not so much inaccurate as it is insufficient: in the Syriac, those words are: boh bad.mu.tō. The key word is d.mu.tō, which means: “the form, shape, figure, type, archetype.” The important thing is the words of the Šarar: it is saying that the blessing of the chalice was done on the model of the blessing of the bread. It is the language of archetypes. It reminds us – it does not say, but it reminds us that what Our Lord did at the Last Supper is a type (archetype), which invited us to look for its reflection in the antetypes of daily life: every time we drink from a cup we can link our action to the Lord’s final meal and the Eucharistic offering.

This is truly awe-inspiring.