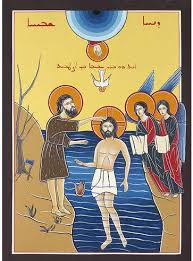 The Feast of the Epiphany falls on 6 January, and inaugurates a Season which runs until the three weeks of commemoration of the departed, the immediate prelude to Lent.

The icon gives this feast its proper Syriac name, the denHo. This means “the rising of the sun or stars, sunrise, dayspring; brightness, light.” Metaphorically, it refers to “the shining forth or manifestation of the Lord in the flesh.” The 3eedo d.denHo is the Epiphany, the Greek word for “manifestation.” Therefore, the Syriac term for this feast and its season is a more comprehensive word than the Greek. The fact of the matter is that no one really understands what the English means: there is even uncertainty is the Latin Church whether it refers to the worship of the Magi or the Miracle at the Wedding at Cana, too.

But to see this feast as the “Rising of the Sun” is to illustrate in one simple phrase what it should emotionally mean to us. To think of it as the “Rising of the Star” is also appropriate, and should lead Christians to reflect on the prophecy that “there shall come a Star out of Jacob, and a Sceptre shall rise out of Israel …” Numbers 24:17. It also reminds us of the Star of Bethlehem, and indeed, in typology, all these stars are manifestations of the one star. In other words, in Syriac thought, the feast of the Epiphany reminds us that the Lord Jesus is the source of all light, and especially of spiritual light; He is the true sun, the true star; and when we see these in the heavens, we do well to lift our hearts to Him, too.

To recap, this feast is called the “epiphany,” “manifestation,” and “sunrise” because it is when Our Lord, who had been living quietly in his Nazareth home appeared before all the world. To us, we also see it as the first public manifestation of the Trinity.

When he prepared this icon, Fr Badwi had before him four ancient examples. Three of them are very close indeed to this icon. When we contemplated the icon of the Annunciation to Our Lady, we saw that the water in the well was drawn as if it was standing up all by itself. These three icons had something exactly the same with the river: it stands up from the ground like a pyramid, so that the head of the Lord is barely lower than that of St John the Baptist. Of this icon, Fr Badwi writes:

The Trinitarian element is represented: the Father by the chirophany (the appearance of His hand), which is a symbol not only of the Creator but also of His voice. He is seen by His incarnate Son, baptized in the Jordan by the Forerunner. The Holy Spirit, in the form of a dove, descends from the heights and rests on the head of the Son. The angels hasten to carry towels to dry the Ember who has been baptized, symbolized by the flame coming out of the water. This is unique to the Syro-Maronite tradition. The fire and the water are the image of the divinity united to the humanity through the person of the incarnate Son of God in the perfection of His two natures.

This feature of the divine nature as fire is shown very clearly in the Rabboula manuscript, where along the right hand side of the picture, we see the Father’s hand pointing down, directly beneath it is the dove of the Holy Spirit, and directly beneath that is the pillar of fire which is ascending from the River Jordan where the Lord is being baptised. Here, Father Badwi has done something a little differently. He has drawn the seven fold sphere of heaven in the top middle of the icon, giving it the most important position, showing that all which unfolds beneath is being directed by God. To the right and left of the seven heavens are written the words “the Glorious DenHo.”

The Father’s hand is slightly but unmistakably titled towards the right of the viewer because the Lord Jesus is seated on His right. Beneath the hand of God are the words “This is my beloved Son.” This shows that the hand of God also represents his Word – both are ways of understanding the creative power of God (which is One in itself, as all in God shares in His Oneness). The Holy Spirit has descended, and now overs the head of the Son. The fire to which we were referring seems to float above the water, almost as if it were a flower on the surface of the river. This also ties in with the Maronite theme that when Our Lord was baptised, spiritual fire filled the water, and all the waters in the world were purified.

The axe by the tree which is behind St John the Baptist is also important: he said that when Pharisees and Sadducees came to the River Jordan to be baptised, St John said to them: “Produce good fruit as evidence of your repentance … every tree that does not bear good fruit will be cut down and thrown into the fire” (3:8 and 10).So when we read this icon from left to right, we begin with the need for repentance for our sins, and the warning that the tree of evil is about to chopped down. Then we come to St John the Baptist, who is wearing rough clothing to signify his own poverty and mortification of the body, and then, in the middle, Our Lord, being baptised. To the right are the angels who are there to tend to Him. The presence of the angels reminds us of the words of St Matthew, who immediately after the baptism of the Lord, as His temptation in the desert, which ends with these words: “… and behold, angels came and ministered to him” (Matthew 4:11).

Of course, the angels also represent heaven, and therefore salvation. So reading the icon from left to right, we have this sequence: penance, the Lord and His sacraments, the angels of heaven. Not every icon can be read this way, but when the icon tells a story, it often will be that way.