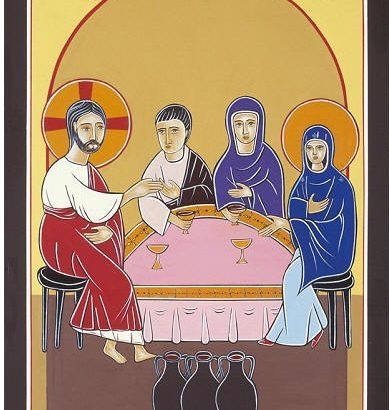 Cana Sunday is the entrance to Lent, but the first day of Lent is Ash Monday. It commemorates the first sign performed by the Lord, as passed on by St John:

Jesus said to her, “Woman, what does your concern have to do with Me? My hour has not yet come.”

His mother said to the servants, “Whatever He says to you, do it.”

Now there were set there six waterpots of stone, according to the manner of purification of the Jews, containing twenty or thirty gallons apiece. Jesus said to them, “Fill the waterpots with water.” And they filled them up to the brim. And He said to them, “Draw some out now, and take it to the master of the feast.” And they took it.

When the master of the feast had tasted the water that was made wine, and did not know where it came from (but the servants who had drawn the water knew), the master of the feast called the bridegroom. And he said to him, “Every man at the beginning sets out the good wine, and when the guests have well drunk, then the inferior. You have kept the good wine until now!”

This was the beginning of signs Jesus did in Cana of Galilee, manifesting His glory; and His disciples believed in Him. After this He went down to Capernaum, He, His mother, His brothers, and His disciples; and they did not stay there many days.

The Lord and His Mother were almost certainly related to the bride and groom. Since the disciples were there, it is quite likely, I would think certain, that the groom was one of them. Cana in Galilee was about 14 kilometres north of Galilee, and it was at the top of a hill, situated along a road which was difficult. So it was quite an effort for them to attend. The idea that Our Lord was speaking disrespectfully to Our Lady is without foundation: taking the culture into account, it was in fact quite the opposite.

Also, the fact that this was the first of His signs, although He already had disciples, reminds us that the teaching is more important than the sign, and that it is the more natural way to be converted by the proclamation of the good news, even in the absence of miracles.

Fr Badwi states that he took his inspiration from a manuscript from Tur Abdin, where the Lord, his Mother and the newly married couple are seated around a “semi-circular wine-coloured table, reflecting a depth without perspective. In front of the table, there are three jars, symbolizing the Trinity, filled with water changed into wine. The scene takes place under an arch giving the impression of an interior, the house of the couple.”

When he says “a depth without perspective,” he means that it is not three-dimensional, but it does show that Lord and His mother are in the forefront. Perhaps the most interesting aspect of this icon is the use of the Syriac depiction of only three, not six, of the jars. It shows how the Syriac tradition did not at all mind departing from the scripture in order to make a point. In fact, by altering a detail, by not copying the scripture in all details, it draws attention. That is, showing only three water jars makes us ask: why? And three is the number of the Trinity.

I think this indicates that Our Lady is drawing attention to the miracle: the table has the colour of wine, as we have noted, so “wine” here is clearly a symbol of something more – perhaps the blood of the Lord which will be shed for us. Wine is also a symbol of taking something in a given state (water) and by mixing something with it (grapes) we make of it something new, with a new power (wine). Wine was used in the ancient world not chiefly for getting drunk, but to raise one’s spirits, and to strength one. In particular, there is an ancient tradition that wine was invented in order to strengthen one’s will. That is, the concept – which I think has a lot of truth in it – is that by forming an intention, and drinking to that intention (making a toast), we strengthen or consolidate that intention within ourselves. After all, if you drink wine with a purpose in mind, in order to help you remember that purpose later on, you most definitely do feel yourself differently.

I wonder if this is not why the Lord’s hand is raised to a higher level: that of the bridal couple? Our Lady is pointing to the miracle of the wine, and Our Lord to miracle of transformation through the power of God’s grace and His love – the love which is reflected in the love of man and wife. How often do we realise that, when a couple are arguing, if they could only recall and relive the state of joy and commitment in which they married, they would not have the strife which they do?

Finally, why does Our Lord conspicuously have bare feet? Perhaps the answer is found in Isaiah 52:6-7: “Therefore My people shall know My name; Therefore they shall know in that day that I am He who speaks: ‘Behold, it is I.’ ” How beautiful upon the mountains are the feet of him who brings good news, who proclaims peace, who brings glad tidings of good things, who proclaims salvation, who says to Zion, “Your God reigns!”