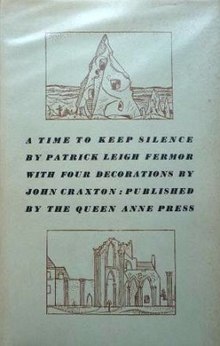 This is Fermor’s account of his visit to two monasteries, and one burial ground of monasteries, if I may put it that way. Fermor had a distinguished role in WWII, and received the Order of the British Empire. He might not be the first person one would think of two write a book like this, but it is a success. Not a triumph, just a success.

Fermor spent some time at the Benedictine Abbey of St Wandrille de Fontanelle in Normandy, France; then La Grande Trappe Abbey, also in France. Finally, he has a short chapter on his visit to the ancient but abandoned monasteries of Cappadocia. There is a certain amount of history here, a certain amount of attention to the details a tourist would find of interest.

However, I don’t think that what Fermor has to say is as important as the atmosphere he invokes, and the questions it raises for us as we ponder the pictures he paints. I think the chief question can be put like this: is it possible to have the spiritual life of the monastery while living in the world? Put like that, the question is rather black and white, and obviously, living in the world can never be like living in a house of religion. But perhaps the most important aspect of the contemplative life can be present in the world. One might pose the question in these terms: can the external peace of the cloister be found in the workaday world?

It is easy to become all romantic and sentimental about monasteries. For this reason, perhaps, the Church has often scrutinised those wishing to join a monastery, and told them to wait before entering: the monastery is not a sort of fantasy kingdom, let alone serve as an escape from the world. It perhaps gives the best results when someone has been in the world, proved themselves capable of dealing with it, and then chooses to respond to the call of God more fully from within the monastic life. That is, the monk should choose not to flee the world, as having risen above, there is no need for him to do anything but worship God.

This sort of questioning and pondering is, I suggest, the main benefit of this slim volume. But now, let us look at it more closely. The title comes from the magnificent poem in Ecclesiastes 3:1-8

This is appropriate enough. Fermor was never going to become a monk, but he was sensitive enough to benefit from the experience of the monastic life. It seems to me that the most powerful exposure was the first, at St Wandrille. The climax of the book is probably found there. After speaking of the centrality of worship, above all in the Mass, then in the Divine Office, he says of the monks’ spiritual exercises:

They range from a repetition of the simpler prayers, sometimes tallied by the movement of beads through the fingers, to an advanced intellectual skill in devotion and meditation; and occasionally rise to those hazardous mystical journeys of the soul which culminate, at the end of the purgative and illuminative periods in blinding moments of union with the Godhead; experiences which the poverty of language compels the mystics who experience them to describe in the terminology of profane love; a kind of personal face-to-face intimacy, the very inkling of which … (has in recent centuries) drained away from life in England. … With this daily, unflagging stream of worship, a volume or prayer ascends, of which, if it is efficacious, we are all the beneficiaries. 33-34

This is a curious mix of an intellectual assessment divorced from experience, and a feeling which has been touched not so much by the monastic life as by the prayer life of the monks, and their valuation of it. For example, Fermor does not understand the mystic states at all, otherwise he could not have spoken as if there was only one type. But clearly, he has been shaken into an appreciation that there may well be something supernatural happening here. To his credit, Fermor acknowledges his limited ability to participate and so to benefit from the life he found there (7). (incidentally, he seems to be alluding not only to the rosary, but also to the Jesus Prayer.)

What Fermor found was that after a period of time, which began about four days into his stay, his mind began to change, and: “one reaches a state of peace that is unthought of in the world.” (8) I connect that introduction with the Postscript:

I am writing the last paragraphs of this book on the sill of a top-storey window in a Benedictine priory in Hampshire. The late afternoon is silent except for the sounds of birds in the leaves underneath and the sudden jerky movements of squirrels.” (89)

At the end of the Postscript, after quoting from and meditating on some writing of St Basil, he compares the saint’s world to his own:

… while the daylight vanishes from these northern hayfields, it is a similar blessing, an ancient wisdom exorcising the memory of the conflict and bloodshed of the intervening centuries, that brings its message of tranquillity to quieten the mind and compose the spirit. (95)

It is a beautiful picture. But, typically, Fermor has left out what is most important: God.