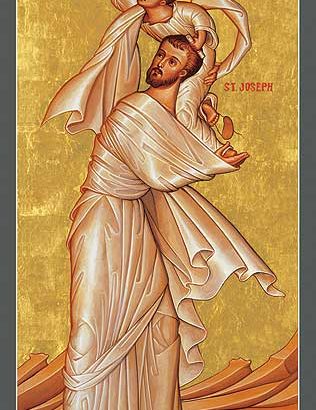 St Joseph, the Foster Father of the Lord, is one of the greatest saints of the entire Church. He is a model of fatherhood, of manhood, and of the virtues of a husband. His life exhibits the virtues, not least those of wisdom and prudence, justice, chastity, courage, obedience, patience, equanimity in poverty, diligent work, proper attention to and enjoyment of home life. He is known in his liturgy as “Guardian of virgins,” “Pillar of families,” “Solace of the afflicted,” “Hope of the sick,” “Patron of the dying,” and “Terror of demons.” It is true that we have very few historical sources for him, but what is said in praise of St Joseph is not mere guesswork, it is true to a particular way of thinking which I call “Eastern Christian Typology.” There are certain patterns in sacred history, and St Joseph played a particular role in sacred history: he must therefore have lived in accordance with the his type, is basically that of God the Father. By this way of thinking, he must therefore have had all those virtues.

St Ephrem (c. 306-373) has left us the fullest treatment of St Joseph according to the logic of Eastern Christian Typology, and so I shall commence there. In the second of his Hymns on the Nativity (the Epiphany), St Ephrem writes:

Worthy too is Joseph, who by grace is called father

to the true Son, Him whose Father is glorious,

Ruler of all Creation … (stanza 6)

Note that St Ephrem knows that St Joseph was not the physical father of the Lord, yet he was by grace allowed that name. This stanza also brings St Joseph into a certain correspondence with God the Father. A little later in the same hymn, St Ephrem writes:

Joseph worshipped You: a crown he offered to You –

this troubled just man whom the angels reassured.

So that you might increase his reward, he rescued You in his arms. (stanza 11)

The crown referred to follows from the fact that St Joseph was in the line of King David, from the tribe of Judah. A few lines further down, St Ephrem says that Joseph the son of David was betrothed to a daughter of David (for the Syriac tradition believed, almost certainly correctly, that both Our Lady and St Joseph were descended from King David.) St Ephrem says that St Joseph was needed if only to lend his name to the Lord, for “the child could not be registered in the name of his mother.” (stanza 13) This is the sort of thing we tend not to think about today, yet it has a good deal of sense in it. It is the sort of thing which the people of that time were concerned about, and hence God had to take account of it, for Our Lord was incarnated into specific historical conditions.

We might recall here, that Our Lord was the true king of Israel, but whereas the ancient Jews were expecting their king to establish a worldly kingdom, He had come to bring them to heaven, and teach them the way to bring heaven on earth. The crown is central to the understanding of St Joseph, for it was part of the prophecy that the Messiah would be the Son of David – and the Gospels make the point that even the blind could perceive what those with seeing eyes could not – that Jesus was the Son of David. One of the charming aspects of the Syriac tradition is the way that they do not hesitate to put words into the mouth of an ancient person, for they are following the types. St Ephrem, in his fifth hymn on the Nativity, says:

as a babe. He served Him

as God. He rejoiced in Him

as in a blessing, and he was attentive to Him

as to the Just One – a great paradox!

“Who has given me the Son of the Most High

to be a son to me? I was jealous of Your mother

and wanted to divorce her. I did not know

that in her womb was a great treasure

that would suddenly enrich my poverty.

“David the king arose from my race

and put on a crown. Great ignominy

have I attained, for instead of a king

I am a carpenter. A crown has found me

This is clearly enough based on the truth, expressed in the Magnificat, that the Lord lifts the humble, and gives them more than they ever thought was possible. So with St Joseph, he thought he had lost his wife to sin, and he discovered in her Son and in her humility the ultimate in goodness. He thought he was a disgrace to the line of David, yet he is part of its greatest glory.

Finally, in hymn 21, we have a typological correspondence between Joseph the son of Jacob, and Joseph the Foster Father of the Lord. Briefly, Joseph of the Old Testament Book of Genesis is what we call an antetype of St Joseph: both received guidance in dreams. Joseph saved his family and his people by calling them into Egypt when there was a famine in the land of Egypt. St Joseph took his family into Egypt to save them when they were threatened by the murderous Herod. Both were guardians and fosterers, nourishers. But St Joseph returned from Egypt alive, while Joseph died there, and was buried in Israel. Joseph’s family were reduced to slavery for a time, while St Joseph’s were given spiritual liberty. Sometimes the images produced from the types are contraries, photographic negatives.

Finally, I have tried to attach here a hymn I wrote for St Joseph, titled “The Three Dreams of St Joseph.”