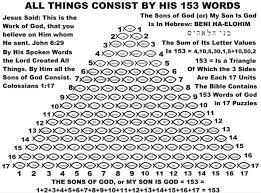 In the Gospel passage we read for the Fourth Sunday after Easter, St John tells us that the apostles had fished all night and caught nothing. But, at the word of the Lord, they lowered their nets for this one catch, pulling up 153 fish. Why 153 and not some other number? I think there is a clear answer, which leads us to other discoveries.

The reason is simple: they had caught 153 fish. But what follows from that is significant. Why? Let us say that you have a birthday party. You are eight years old. Your parents put eight candles on the cake. If I tell people there were eight candles on the cake, then like the 153 fish, there are two aspects. First, the reason I said there were eight candles is that that is how many there were. But the number has a significance, without saying any more, one knows that you turned eight on that occasion. So the fact that the number 153 has a meaning does most definitely not mean that it was made up by St John.

There is a lot of background to the use of numbers in the Bible and in ancient literature. Those who are interested could look up the word “gematria.” However, I do not have time to deal with that here, so I shall go straight to the thesis of Richard Bauckham in The Testimony of the Beloved Disciple. He points out that in addition to the gematria, numbers were used in numerical composition through writing passages with a definite number of syllables or words, and a word might appear a specific number of times in a given passage or book (p. 275). This was not as unusual as it seems today: the number of words was regularly checked in ancient manuscripts, partly to make sure that a word had not been lost when it was copied, as all copying had to be done by hand (284).

These techniques can be combined, so for example, John 1:1-18, the Prologue to the Gospel, has 496 syllables, and 496 is the numerical value of the word monogenēs, “only begotten.” Further, 496 is a significant number because it is one of the triangular numbers being the sum of every number between 1 and 31. (275-276). These are the numbers which can be written like an equilateral triangle, with one number on the top line, two on the next, and so on, increasing one by one, until the final number on the bottom.

There are even more tie-ins for the Prologue, but the best is probably this: in John 1:29 and 35-36, when John the Baptist sees Jesus and says “Behold the Lamb of God.” He would have been understood by those who knew the Hebrew gematria to be drawing a connection between “Lamb of God” which has a value of 391 in gematria and the name “Jesus” which has exactly the same numerical value (276). The numerical equivalent is intended to point to an affinity of essential qualities. This is, of course, another aspect of typology: the type repeats itself through numerical values.

What follows is a little more involved, although it is not difficult if you take the time. The numbers 17 and 153 point us, by gematria, to Ezekiel 47:9-10: “it shall be that every living thing that moves, wherever the rivers (from the Temple) go, will live. There will be a very great multitude of fish, because these waters go there; for they will be healed, and everything will live wherever the river goes. It shall be that fishermen will stand by it from En Gedi to En Eglaim; they will be places for spreading their nets. Their fish will be of the same kinds as the fish of the Great Sea, exceedingly many.”

St John alludes to this passage in the narrative of the fish catch, e.g. “Eglaim” as a value of 153, and Gedi has 17, as does the word for “sacrifice”. As Bauckham notes: “The new life symbolized by the river of Ezekiel 47, which makes people children of God, has its source in the temple, the place of sacrifice. As we shall see, according to this Gospel’s interpretation of Ezekiel 47, it has its origin in the sacrificial death of Jesus …” (279). I will omit his further treatment of that theme. Bauckham states:

The keywords of 20:30-31 are: sign, believe, Christ, life. Each of these four words occurs for the last time in the Gospel in those verses. If we count the number of occurrences of these words in the whole Gospel up to and including this passage, the results are (sign) 17, (believe) 98, (Christ) 19, and (life) 36. The sum of the last three of these numbers is 153. So the number 17 and its “triangle” are written into the whole Gospel in the form of these word statistics and are implicit in 20:30-31. (281)

Bauckham makes many other interesting observations which show how carefully the Gospel as a whole and in the form we have it was planned and executed. Perhaps one of the most important points is the one with which he finishes: you do not need to know gematria to obtain sense from the Gospel. It is perfectly adequate and more than adequate for readers who do not understand it. But it does add a further dimension, and makes some very subtle tie-ins to different parts of the Scripture possible (283-284). This also shows us that the Gospel was not to be listened to, only. Clearly, the evangelist hoped that the text itself would be studied by learned men.

I think there is another consequence: the modern habit of reading the Gospel as if it were a piece of ordinary literature is wrong. Some parts of it, at least, were fitted together in the belief that it was and would be received as holy scripture, and therefore above and beyond ordinary thought.