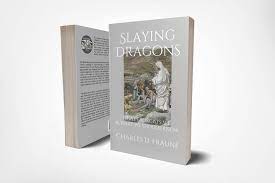 Note: I discussed the contents of this review with my bishop, His Grace Archbishop Antoine-Charbel Tarabay, and several other priests. I have incorporated the insights which His Grace and these learned men kindly offered, but any remaining errors are purely my own.  I commend to you Mr Fraune’s web-site, TheRetreatBox.com

We are living in a culture where commentators have erred on the side of minimizing, even dismissing, the dangers of diabolic activity. Perhaps the pendulum is now swinging in the other direction, at least in some quarters. It is not so easy to strike balance when speaking of the Dark One: but there is a serenely even coverage in Archbishop Sheehan’s Apologetics and Christian Doctrine, new edition, 2001, 318-324; while the few pages in Fr John A. Hardon’s The Catholic Catechism, 1977, 87-90 are also valuable.

Now, Mr Charles Fraune’s audacious endeavour is to warn alert us to the Evil One and his assault on humanity, but most of all, to exhort us to turn more fully to God. Fraune seeks to “startle the poor sheep back,” as Hopkins put it. Chapter 7, “Authority and the Diabolical” makes some very good points: for example, I cannot see that any good has come from the Harry Potter books (p. 91). It is, I suggest, sufficient to express disapprobation of their glorification of magic, and, from what I can see, the complete absence of absolute good and evil in the literature. To paint a world of magic but not to acknowledge the supernatural world of God is, I suggest, disordered, and implicitly atheistic if not Satanic. To put it another way: the Harry Potter stories have the supernatural in the form of magic, while the supernatural God, His commandments and sacraments, is absent. In that case, the source of the supernatural is just as likely to be the devil. For example, there is no worship or prayer at all in the novels, and this is more consistent with Satanism than with Theism, for while God commands us to worship Him, worship of the devil can be implicit: all he wants is for us to forfeit our souls, and radically displacing God from our lives is enough for him. I make no judgment of the author of those novels. She may not have intended that, but still, that is how I assess the world-view expressed in that fiction.

However, if I share his concerns about that awful literature, I cannot follow Fraune and his sources [see last week’s comments about the supposed authority of exorcists] when he says that the father of a family can bless his wife and children, but his wife can only bless their children, not her husband. The true doctrine, I submit, is that anyone can, in principle, bless anyone or anything else, but certain blessings are reserved to certain people in certain settings: e.g. in the Divine Sacrifice of the Mass, if a bishop is present, the blessings are reserved to him. Hence sacred scripture enjoins us, in many places, to bless the Lord. I would take as my parade ground example, the Canticle of the Three Young Men from Daniel 3 which is (or at least was) in Sunday Lauds, exhorting all the works of the Lord, from the angels to whales, the ice and the snow, the mountains and the hills, to bless the Lord. If dews and hoarfrosts can bless the Lord Almighty, why cannot a wife bless her husband?

It is asserted that so-called “binding prayers” are not of Protestant origin. (p. 93) I think there are two questions: definition and evidence. If by “binding prayer” one means nothing more than a prayer for deliverance, then that is correct. Fraune himself does not, I think, err. He seems to understand “binding prayers” that way, and correctly notes that the binding is done by the Lord or His angels. (p 94) But I have found no evidence for prayers distinguished by that name in the Catholic tradition before Vatican II, when Protestant, and specifically Evangelical and Pentecostal influence leaked into the Church. The apparently complete blank of research in this area is a mystery. Now, while I could be wrong, it does seem to me that the idea of “binding prayer” which some exorcists present (pp. 94-95) partake of the nature of spells.

There is, I suggest, a danger when we read that an exorcist says “you can add invocations …” (p. 95) If this is taken to mean that to say certain things we need the say-so of an exorcist, this cannot be right. But I do not think that Fraune intends that. What he may or may not mean is that certain prayerful formulations are intrinsically more effective than others. If we are speaking about the Divine Liturgy, then it is clear that some formulations are wrong. That same principle is applicable, to a certain extent, elsewhere. But as a general rule the point is in the intention rather than the words. God reads hearts and minds. So to say that certain prayers, with the right words, are “binding prayers” strikes me as incomplete: the intention and the words should correspond, but the important factor is the intention, and we should not fear that our prayer will not be heard because we omitted through ignorance or negligence, a supposedly powerful phrase or prayer. Collections of deliverance prayers such as that of Archbishop Porteous are useful and edifying because they have been carefully chosen to keep our weak and feeble minds on the right path. But unless one wishes to promote a “deliverance ministry” and follow in the footsteps of Protestant celebrity exorcists, why not just speak about “prayers” and forego portentous reference to “binding prayers” as if there are some prayers with “super powers.”

Chapter Eight is called “Sin and the Influence of Satan.” I have dealt with some of the issues raised in this section in part 1 of my review. I agree that sins against nature and the natural order pose especial dangers: I would add only that the Evil One uses sex of any desription as bait to sell witchcraft and Satanism, and especially in the Black Mass, but what is abnormal is indulged precisely because that rite is an inversion of the Most Holy. These rituals absolutely must be avoided for the sake of one’s immortal soul.

Chapter Nine is titled “Resisting Diabolical Influence.” In this chapter, there is a friction between statements which inspire confidence and others which rather undermine it. As an example of the first: “Fidelity to Christ and recourse to the aids He gives us in the Sacraments and sacramental is sufficient to protect us.” (p. 113) I think that is right. But then, if that is so, then how can it be said that “God permits the possession of someone in a state of grace, through a spell, for example …” (p. 112) I do not at all doubt that God may allow the temptation of someone in a state of grace, but I do not believe that He would allow the possession of such a person. The notion that we know this because a demon told an exorcist in the course of an exorcism is not at all persuasive. This tension is found in several places in the book: see pp. 120, 121, and 131. Quite balanced and perfectly correct (in my humble opinion) is Mr Fraune’s own comment: “If we are living a normal, good Catholic life, the odds of being diabolically influenced are rare, though it can still happen.” (p. 124, and similarly sound statements at pp. 120, 121, 145, and 131 where he quotes Sr Lucia, St Padre Pio, and St Louis de Montfort) Note that he speaks of “influence” not “possession.” That may sound like a rather small difference, but sometimes the small differences are the significant ones.

“Protecting your Spiritual Life” is the heading of chapter 10. Generally speaking, this may be the best chapter in a good book. But if burying St Joseph statues is superstitious (p. 139) so too is burying St Benedict medals in the four corners of your property. (p. 132) There are a few other matters here which I would be loath to endorse, but I have mentioned them in parts 1 and 2 of this review.

Chapter 11 is titled “Consorting with Evil.” Now it just so happens that here I do agree with something which Mr Fraune was told by exorcists: that there is an increasing level of “diabolical oppression and obsession related to sin, witchcraft, Satanism, and the occult.” (p. 157) But I do not believe it because the exorcists say so, I believe it because (1) Satanists, witches, and occultists are quite open about their activity and their growth is evident. (2) With their growing numbers we see evil raising its head: any intelligent Catholic can discern this in the way that major political parties endorse abortion, in the gender-madness which is overtaking us, and the mounting spate of attacks on Catholic Churches all through the world, but especially in formerly Christian nations. The Enemy hates the Church, and where there are attacks on it, it is quite reasonable to at least suspect his influence, whether directly or indirectly exerted. For the reasons which I quoted from Fr Peter Joseph in part 1, I do not believe that cursing a master tape can subject to that curse someone who sees a replica made from it. (p. 157) Yet, I would endorse the warning not to watch pornography. It is an evil, and it leads to more and more evil. It is addictive, and becomes a cancer in the mind, weakening the will-power. The making available pornography to children is one of the great sins of modern times, and in itself, a proof of the rising power of Satan.

So despite my differences with some of what Mr Fraune says, and especially with his attitude to the authority of exorcists, this is an important and valuable book. If it leads more people to deepen their prayer life, it will have been most worthwhile indeed.