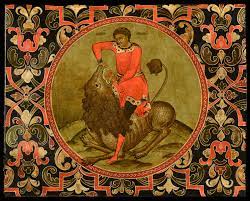 The heart of Mar Jacob of Sarug’s Homily on Samson is this: the beauty of the world is revealed to our spiritual eyes by seeing the antetypes of Christ in it, and Samson is at his most beautiful when he depicts the type of Christ, that is, when he reflects the divine image.

This means that the lesson of this homily goes far beyond the example of Samson, which we saw in the first post of this series. In fact, the lessons we learn from this extraordinary poem go to the whole of our experience in this world.

Son of God, open for me my eyes that I may behold its beauty.

and they solemnly raise You up (wam.zay.Heen), so that the world might see how beautiful You are. (1-4)

I have included some of the original Syriac words here, because they are the direct links to the almost miraculous richness of the Church tradition. The word translated as “sunrise” is exactly the same word used for the Feast of the Epiphany. This is no coincidence: Mar Jacob is teaching us something about the nature of the Epiphany, with the result that from engaging with this homily, we should see more dimensions in that great feast than we ever had before, and little as we expected to.

The word for “your mysteries” is exactly that used for the Sacraments, most especially for the Eucharist. The “readings” (the same root as is used by Muslims for their sacred book) takes us to the scripture proclaimed at the Divine Liturgy by the qōruyō or subdeacon.

In speaking of the “image” of the Lord, Mar Jacob employs one of the central words linking the Semitic theology of typology with the ancient Mesopotamian tradition, a word which survived to be used of the sacred images in the Church. Note, too, his use of the word “icon” for the Lord on the Cross in line 13.

Last, but not least, the word for “raising up” the Lord is precisely the word we use for the elevation and censing of the holy icons in our paraliturgies: ziyāH. So in these four lines, we have a rich network of words which unite speaking about the Lord, about scripture, the Divine liturgy, and our own spiritual lives and insight into the Face of God which is both hidden and manifested through the creation.

That is the essence of this book. While Jacob tells the story of Samson he also interprets it. Jacob notes at the outset that Samson was a Nazirite (see part 1 of this review), and the subject of a prophecy that he would be a saviour (see Judges 13:5 for the angel’s saying he would begin the salvation of his people from the Philistines). As he interprets the narrative, Jacob points out similarities to the saving work of the Lord, for “Samson was a Nazirite of Christ” (lit. “him,” line 94). Even the Gentile whom Samson weds is an antetype (TufSō) of the Church according to Jacob (107) and it is the devil who sends the lion against him (95), itself an antetype of death, which Christ slew (see the notes on p.24).

When we come to the honeycomb, Mar Jacob notes – quite correctly – that the meaning of the symbols (antetypes) would not become clear until the coming of the Lord and the unfolding of His ministry (128-138 and 145-149). As we know, this is so because the Incarnation is the centre of all history, even though if we take linear time (the only time we can grasp) it seems to have been one point in an ongoing current. In fact, the Incarnation is not only the middle of the circle, it suffuses, in a sense, the whole of the circle. The clue to all the riddles in the story of Samson are clarified, says Jacob, only when “the type of the Son was announced by the angel” (163, the archangel Gabriel). In this connection, Jacob writes that: “Samson is beautiful (šafeer) whenever he depicts the Messiah’s type” (167).

Note that this also means that what is in the world, and we ourselves, are not always beautiful, but only when we correspond to the type of Christ – the divine image in which we were originally made. First, the word šafeer is not always well translated as “beautiful.” It also means “(a) fair, good, lovely, pleasing … (b) honourable, noble, excellent, virtuous, right …” It is this range of qualities which conforming to the divine image produce in us. Jacob is not slow to point out that sometimes Samson behaved in an odious way (171-180).

The miracles in the Samson narrative are employed by Jacob to make the point that: “From one wonder (ted.mur.tō) yet another wonder sprang” (257). Footnote 50 states that, in the Syriac tradition, “Wonder, tehrâ, is the beginning of ecstasy. … Ephrem is constantly amazed in wonder at the Incarnation and at the Eucharist, but also at all the created world as both Scripture and the natural world are revelatory.” Although I might quibble with the word “ecstasy,” this is right, and highlights a major strength of the Syriac mystical tradition: how it manages to find its way into an accessible and understandable interpretation of the divine sacraments and scripture. There is just one issue: the word used later on but not here is not tehrâ, it is ted.mur.tō, the word for a miracle or a marvel. Neither Payne Smith nor Sokoloff give “wonder” for this word, and it is not certainly the feeling of wonder, but the fact of a miracle. The loose translation obscures the fact that the miracles of scripture were seen as signs which were to move us to wonder, and hence to seeing the presence of God with new force.

I think this is sufficient to indicate the insight in this remarkable work. Not all of Mar Jacob’s writings are so dense with spiritual wealth, and indeed the first half of the homily is richer than the second. But what we find here is well worth the study of the whole, because the same lessons are repeated, and being repeated, are better inculcated.