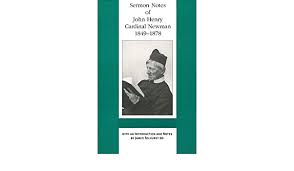 The Sermon Notes of John Henry Cardinal Newman 1849-1878, edited by James Tolhurst, are always rewarding material to ponder. His notes for 19 August 1849 are, I think, particularly rich. He commences by referring to Luke 24:26; and Hebrews 2:10.

St Luke says, in the Douay-Rheims translation: “Ought not Christ to have suffered these things, and so to enter into his glory?” The Greek word edei means “it is necessary,” but also “it is proper.” So the meaning, according to Newman is that because it was proper for the Lord to suffer to enter into his glory, then it had to be.

The text of Hebrews 2:10 is: “For it became him, for whom are all things, and by whom are all things, who had brought many children into glory, to perfect the author of their salvation, by his passion.” Here, the words “it became” translate the Greek eprepen, which means “it was fitting, proper, suitable.” Clearly, it is the same ideas as in St Luke’s Gospel.

The true principle, therefore, is that – at least when it comes to sacred history – what happened was the proper to have happened in those circumstances. I do not think it can be reversed into a false principle: that is, it would be false to argue that whatever we think was proper must have happened. The only control on the false principle would then be whatever we thought was proper in the circumstances. But I think that the true principle can be used another way: it can make it more likely that a doctrine is true if it can be shown that the doctrine is proper (see Part Two below).

This is how I read St J.H.N.’s argument that it was becoming (in the sense of proper) for Our Lord to raise His sinless mother from the dead. He sets out these considerations: the doctrine that God was her son, and had lain in her womb, was suckled by her, and so on; and that she had heard Him, enjoyed seeing Him smile, etc. In other words, the really human affectionate relationship between mother and son had taken place.

What then, is proper treatment of such a mother? St J.H.N. then quotes Esther 6. There, the king asks: “What ought to be done to the man whom the king is desirous to honour?” The reply, which the king acts on in honouring Esther is that such a person: “Ought to be clothed with the king’s apparel, and to be set upon the horse that the king rides upon, and to have the royal crown upon his head. And let the first of the king’s princes and nobles hold his horse, and going through the street of the city, proclaim before him and say: Thus shall he be honoured, whom the king hath a mind to honour.”

Newman also makes an argument that sanctity and spiritual office or work often go together. Since Our Lady’s spiritual office was of the first rank, none higher, then her sanctity should also have been without parallel. Further, on the basis that “by their fruits you shall know them” (Matthew 7:16), then Our Lady must have been the most remarkable of humans, since her fruit was the most wonderful. But Newman’s mind does not leave it there: he goes on to point out that, more even than that, Our Lady was not a mere instrument. As he says: “The Word did not pass through [her]. He took a body from her, therefore she was worthy of the Creator – full of grace.” I think we could rephrase this as follows: “The Word did not merely pass through her. He took a body from her, therefore she had to have been worthy of the Creator – she was truly full of grace.”

This explains and justifies the doctrine of the Immaculate Conception, Newman says, because “she must surpass all saints.” Then, the mystery of salvation was accomplished with her co-operation: and this was her merit. She could have sinned, but she did not. She was human: she grew in grace.

(It is) more difficult not to believe the Assumption than to believe it after the Incarnation. Human sons sustain their mothers. She died; she saw no corruption, because she had not original sin.

I shall supplement the above by reference to a book Newman published in 1849. I have kept this separate so that the main argument, set out above, would not be bogged down with detail.

In the 18th of his Discourses to Mixed Congregations, titled “On the Fitness of the Glories of Mary,” Newman writes: “… it is a great evidence of truth, in the case of revealed teaching, that it is so consistent, that it so hangs together, that one thing springs out of another, that each part requires and is required by the rest.” This confirms me in my view that his principle is not that what we can consider proper must have happened, but that what happened was proper, and that if there is a doubt about something, then its propriety can gives us grounds for confidence that it did occur.

Hence, in the same place, he writes of the Assumption:

We receive it on the belief of ages; but, viewed in the light of reason, it is the fitness of this termination of her earthly course which so persuasively recommends it to our minds: we feel it “ought” to be; that it “becomes” her Lord and Son thus to provide for one who was so singular and special, both in herself and her relations to Him. We find that it is simply in harmony with the substance and main outlines of the doctrine of the Incarnation, and that without it Catholic teaching would have a character of incompleteness, and would disappoint our pious expectations.

Later in the same discourse, he expands on of the points in his sermon notes as follows:

Was Solomon on his birth called “dear to the Lord”? and shall not the destined Mother of God be dear to Him from the moment she was born? But further still; St. John Baptist was sanctified by the Spirit before his birth; shall Mary be only equal to him? is it not fitting that her privilege should surpass his? … Mary must surpass all the saints; the very fact that certain privileges are known to have been theirs persuades us, almost from the necessity of the case, that she had the same and higher. Her conception was immaculate, in order that she might surpass all saints in the date as well as the fulness of her sanctification.

The comparison with St John the Baptist is, I think, a very powerful point in favour of the Immaculate Conception.