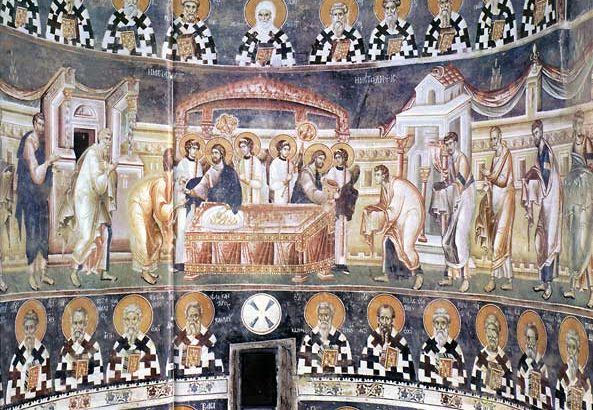 It is fairly certain that the liturgy first celebrated in Antioch was conducted in the Greek language. Charbel Abdallah is of the view that Syriac began to become prominent in Antioch and all Syria throughout the fourth century, although he offers no authority for this. (Charbel Abdallah, L’architecture des églises Maronites, two volumes, PUSEK, Kaslik, 2007, p.18)

The study of the entire Divine Liturgy (the Eucharistic Liturgy, the Mass) is in a state of flux. One of the world’s leading scholars has maintained that Our Lord did not institute the Divine Liturgy at the Last Supper, and this view is often accepted. I have critiqued it, arguing for the reliability of the New Testament accounts [“The Institution of the Eucharist in the Gospel of John, the Didache and Ignatius of Antioch”, Universitas, 504, 5 (2016), 3-35].

Another controversy is whether the Last Supper was the Passover Meal (as the Synoptics would have it), or whether John’s account is correct, and it was not the Passover Meal, for according to the Gospel of John, that would have been eaten on the Friday evening, after the crucifixion. This is significant, because if the Synoptics are correct, then a study of the Passover meal and its practices should illumine the Last Supper. But, even if the Last Supper was the Passover Meal, the earliest written evidence for that meal is the Jewish collection of documents known as the “Mishnah” from the end of the second century and beginning of the third century, which means it is not possible to say what specifically was actually in Jesus’ day.

There was, in those days, actually a Jewish prohibition on writing prayers down, which lasted beyond the Mishnah, and Jewish scholars have pointed out how contradictory the accounts of the prayers can be, and that even at the start of the second century AD there was a requirement that something new be added in prayers. Further, in an age when the form of prayers was not fixed, and private prayers – such as the “Our Father” – were even less fixed, it seems that the disciples at Emmaus recognised Jesus because of his distinctive way of blessing the meal. (For this paragraph, see A. Gelston, The Eucharistic Prayer of Addai and Mari, Clarendon Press, Oxford, 1992, pp.1-10)

These facts concerning the Mishnah are not palatable to many people who have taken it as a good witness to history. Naftali S. Cohn, The Memory of the Temple and the Making of the Rabbis, University of Pennsylvania Press, 2013, makes out a very strong argument that the rabbis who produced the Mishnah were more concerned to buttress their own authority than to present history. This means that it is very dangerous indeed to argue from our understanding of ancient Judaism that early Christian documents and ancient traditions are wrong: our knowledge of ancient Judaism is very partial and often distorted. I recently dealt with how scholars like Brown and Fitzmyer were absolutely certain they understood the Judaism of his day better than St Luke, but they have been refuted, and St Luke vindicated: http://www.fryuhanna.com/2021/09/17/st-luke-and-modern-scholars/

But this does not mean that the study of prayer in ancient Judaism is of no assistance: on the contrary, it reinforces the hints that the wording of the Christian Eucharistic prayers were not fixed before the beginning of the third century. It is also significant that, perhaps especially in Syria, Christians were known to frequent the synagogues. In particular, efforts to trace the eucharistic anaphoras, and especially the Šarar anaphora back to the Jewish birkath ha-mazon, “must be adjudged a failure” (Gelston, 10). Addressing the topic as a whole, Gelston concludes:

In our present state of knowledge we can hardly go further than to say that there is evidence of the ultimate origin of Christian liturgical forms in Jewish forms, and some evidence of specific Jewish influence on Christian worship as late as the fourth century, but that the only specific common form that is not biblical in origin is the invitation ‘Let us bless the Lord our God’. The paucity of evidence together with the growing evidence both for pluriformity of practice and the absence of fixed forms in the first half of the first century, render the quest in Jewish liturgy for the content of the thanksgiving offered by Jesus at the Last Supper illusory. (11)

Andrew McGowan surveyed all that is known of the very earliest Christian liturgical prayers, some of them such as those in the Didache going back to the first century AD, and he shows just how various these are, and how many things we think of as essential to the Divine liturgy, e.g. the Institution Narrative, are not mentioned in our texts: Ancient Christian Worship, Baker Academic, Grand Rapids, 2014, pp.37-47. Another matter which must also be mentioned, because there are many people who think that the older a practice is the more authoritative it is as an example for us today, is that the Eucharistic liturgy was separated from a full meal only after the third century; and even then, when the liturgy was celebrated at the grave of a deceased Christian, “substantial eating and drinking appears to have continued to accompany the rite.” (Paul F. Bradshaw and Maxwell E. Johnson, The Eucharistic Liturgies, Liturgical Press, Collegeville, 2014, p.36)

It now appears that the early Christian bishop would improvise much of the Eucharistic Prayer until some time into the middle of the third century (that is, around 250), and that this may explain why so few early eucharistic prayers have survived. Writing in 1992, Gelston said that: “the only remaining complete anaphoral text before the second half of the fourth century is that of Serapion’s Euchologion,” and that is unlikely to date from before 339. After a thorough consideration of the extant evidence, Gelston shows that, such as it is, the evidence strongly suggests that even in the day of Basil the Great, the terms of the Eucharistic Prayer were quite fluid. (pp.11-19, citing p.12)

What Gelston argues is that, even though we cannot find the very earliest forms, one can conclude that “three kinds of elements … showed an early tendency towards fixity,” and these were (1) scriptural materials (e.g. the Sanctus, the Institution Narrative  and the closing congregational amen of 1 Corinthians 14:16: “Else when you shall bless with the spirit, how shall he that occupies the place of the unlearned say Amen at your giving of thanks, seeing he understands not what you said?”); (2) congregational participation (perhaps responses and prayers); and whatever came from “very early tradition”. (pp.20-21)

An important historian of the liturgy, Gregory Dix, believed that he could identify a pattern of the Mass. His thesis is not so popular as once it was, but I believe that there is something in it. However, the point is this: if anyone imagines that the Divine liturgy or even the Western form, the Mass, can be traced back to before the mid-fourth century in any fixed form, they have the burden of proving their case, because the evidence for a fixed form of the liturgy is absent. In fact, all the available evidence is that it was fluid. And it was often part of a full meal, and was celebrated not in a church, but invariably in a house or at a grave.

I am not saying we have nothing to learn tradition: the opposite is true. But to criticise a liturgical form because it had not been done that way previously is a fallacy, often known as “anachronism.” The real question is something different: what is the innovation or restoration, why was it introduced, and what is its value?