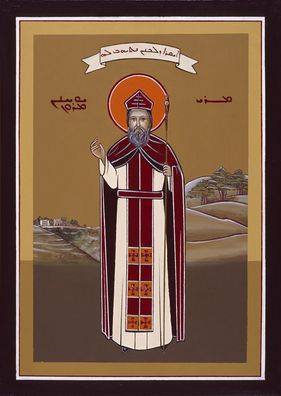 This is the third in a series. The first two are the following:

We saw in the last post that the 1592-1594 Missal issued by Rome was actually excommunicated by the Maronite Patriarch Sarkis Al-Rizzi. This is quite extraordinary. It means that that entire lineage of liturgies of the 250 years prior to 1992 were received with horror by those Maronites best able to judge. As we shall see, the changes were implemented due to compulsion exerted by Rome. It is hard not to conclude that because of that and because of the wanton destruction of original manuscripts, our perspective of the past has been jaundiced.

When Abbati Elias Khalifé-Hachem compared the printed Missal of 1592-1594 with the Ms Flor. Nat. 74, which was written in 1566, he found many modifications under Latin influence, especially in the fore-mass (i.e. the Liturgy of the Word).

A second edition of that 1592-1594 Missal was made in Rome in 1716 by Gabriel Hawa Alapensis (head of the Maronite monastery in Rome), Josephus Šem3ūn Hasronita (the famous Assemani) and Andreas Iskandar Al-Kobrosi. It had 14 anaphoras and even more Latinizations than the earlier one (p. 68). Abbati reports:

… (Šarar) became a rite of the holy communion during Lent (rūšmō d-kōsō). So this old and venerable anaphora which had been used in the ordo communis in the oldest manuscripts was emptied of the consecratory words addressed to Christ and was definitely expelled from the eucharistic celebration.

The ordo communis is the “common order.” When one reads it today, one cannot – in my experience – not be profoundly moved by how the words of the Institution Narrative in this Anaphora speak directly to Our Lord: “You did this, You did that.” I am of course paraphrasing. The point is that there had been an authentic Maronite liturgical tradition prior to the changes imposed by Rome, and that the rewriting done at Rome’s order was radical, drastic, and unexampled. If I were trying to simply score points, I would compare it to later changes made within the Latin Church. Then, the third edition, printed in Rome in 1763 had nine anaphoras. In other words, it reduced the range of Anaphoras. The Maronite liturgy had been marked by just this variety, but no longer.

Abbati states that the 1992 Bkerké edition totally restored the fore-mass to its “old simple structure”, and the ways it changes according to the Maronite liturgical year, which begins with the first Sunday in November. That of course had been lost in the Latinisation, where there as effectively only one Mass. The result of the 1992 revision is, according to Abbati, that: “… we have 45 different fore-masses chosen from the offices of the phanqito … (and) The six anaphoras retained in this edition and cleared of some excrescences … (with) a very liberal Arabic translation.” Where I have been able to compare the Syriac and the Arabic, I have found it quite various: in Šarar, the translation was basically faithful, with a few errors. But I shall have to undertake the lengthy task of carefully comparing them.

It is interesting to note that, for Dwayhi, what separated us from the Syrian Orthodox “is not the liturgy but only some doctrinal issues”. He considered the anaphoras of Marūta of Takrit and Jacob of Edessa to be Syrian Orthodox but also acceptable. (p. 72) When one bears in mind that he had access to older Maronite texts, and was more attuned to the authentic tradition than we can be now, this is quite significant.

Abbati also reported that a liturgical commission is preparing a new edition of the Missal. There is certainly cause for such a task. I shall comment on this in a future posting, because it seems to me that there are some methodological and theological issues to address, and these issues are deeper than any I have seen addressed either by the supporters or the defenders of any Maronite Missal, whether 1592-1594, 1716, 1992 or any other.

Two other comments are significant: Abbati states, and I think he may be correct (see my upcoming article on Macomber’s thesis), that there never seems to have been one single identifiable and uniform Antiochene tradition (p. 75). Second, Sebastian Brock stated, at the conference at which Abbati delivered this research, that: “The history of the anaphora of St James is very complicated, because we’ve got witnesses from many different languages, in Greek, Syriac and Georgian. The early tradition probably is linked with Jerusalem, but it was developed in many different ways, in the course of time. So, the Jerusalem origin is not actually all that relevant, by the time that we are dealing with. But I thoroughly agree with you that there was great local variation within the whole of the Syro-Antiochian area. Throughout the West Syriac liturgical tradition, there has been great variation and I think that that is its strength.”

I shall draw out the significance of these remarks in my methodological postings.