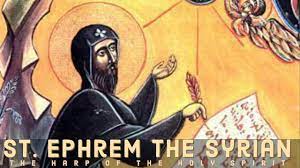 Greek was the language of educated Antioch, and the main language of the Church. But as we move towards the specifically Maronite tradition, we enter the world of Syriac. Ephrem may have been indirectly influenced by Hellenistic culture. He is a witness to Semitic Christianity, one of the main influences on Maronite liturgy and spirituality, although we received other influences, too. Perhaps the Semitic content and the Greek Antiochene foundation were the most important factors in the formative years of the Maronite Church.

We might consider the situation by reference to a geographic picture: Antioch in the West was Greek-language. Edessa and the other cities of the East were Syriac-language. St Maroun lived in the region of Cyrrhus, mid-way between the two, and represented a bridge between the two Christian cultures. In keeping with this venerable tradition, Maronites are both Eastern and Western. It is quite clear that the writing of St Ephrem was a massive influence on the Maronite Liturgy. If you attend the Maronite Divine Sacrifice, then whether you know it or not, you use his words.

It is known that Ephrem died on 9 June 373, but it is only a guess to say that he was born in about 306. He was born in Nisibis, then a city of Persia, and lived there until the last ten years of his life when, as a result of the Persian conquest, he had to move one hundred miles to the West, to Edessa, where he lived in a cave. Known as “The Harp of the Spirit,” Ephrem was a deacon in the church, never a priest, and may have been one of the Sons of the Covenant. He had many talents, being a teacher of catechesis, hymn-writer, choir leader and commentator. He introduced the idea of a woman’s choir, which he took from the “daughters of the covenant”. These “daughters” were virgins, and possibly also widows who lived lives similar to those we today associate with ascetically-minded nuns. Although there is a tradition that his father was a pagan priest, it seems that he was a Christian from a “very young age”. We cannot be sure of how he lived except that he was ascetic, and a deacon.

Easily the best introduction is Sebastian Brock’s The Luminous Eye. He writes:

To Ephrem, theological definitions are not only potentially dangerous, but they can also be blasphemous. They can be dangerous because, by providing ‘boundaries’, they are likely to have a deadening and fossilizing effect on people’s conception of the subject of enquiry … the human experience of God. Dogmatic ‘definitions’ can moreover, in Ephrem’s eyes, be actually blasphemous when these definitions touch upon some aspect of God’s Being: for by trying to ‘define’ God one is in effect attempting to contain the Uncontainable, to limit the Limitless. (23-24)

The search for theological definitions, a heritage from Greek philosophy, is of course by no means the only way of conducting theological enquiry. Ephrem’s radically different approach is by way of paradox and symbolism, and for this purpose poetry proves a far more suitable vehicle than prose, seeing that poetry is much better capable of sustaining the essential dynamism and fluidity that is characteristic of this sort of approach to theology. (25)

For example, a person working from definitions might speak of God as being omnipotent, and speak about the meaning of God’s omnipotence. To Ephrem, this would have been not only useless, and more than absurd, it would probably have been blasphemous: for Ephrem, God was the Great One who became small, the Rich One who became poor, the Hidden One who revealed Himself. The paradoxes give us something to ponder and with which to seek wisdom, but nothing to grasp and so to possess.

Ephrem is constantly aware of the sharp divide between Creator and creation. In one of the Hymns on Faith (69:11) he speaks of this ontological gap as a ‘chasm’ reflecting the term used in the Parable of Dives and Lazarus (Luke 16:26); across this chasm ‘what is made cannot reach its maker’ (Faith 30.2). This means that created ‘natures’ are incapable of saying anything about the divine nature (30.2). (26)

Even angels are on this side of the chasm (in the Syriac tradition, angels are usually known as “watchers” [3îrê]). But the human intellect has much legitimate work to do: for God has revealed much (the galyata, ‘revealed things’.) A sound intellect will respect the hiddenness (kasyuta) and the revelation of God working together in each human life. The hidden and the revealed go together: even if the Incarnation could be grasped by the senses, at least by those then living, the mind could not grasp the hidden divinity.

It is for this reason that the symbols are not instruments of God’s revelation: they belong to this world, but what is hidden in them will later be revealed. I differ from Brock who sees types as being something similar. I believe that in Ephrem the types actually exist simultaneously on multiple levels: the divine and the earthly, to name but two. Den Biesen probably agrees with me. He states that the use of polarity by Ephrem (above and below, hidden and revealed, eternal and mortal, holy and sinful, shadow and fulfilment, temporary and lasting etc.), embody:

… the primordial polarity between Creator and creation … All in creation is therefore image or symbol of the Creator, in the sense that in it and through it the Invisible is seen, the Unknowable known, and the Omnipresent and Eternal experienced within the limits of space and time.

I have mentioned St Ephrem and his work in many pages in this site. A search will quickly locate them.