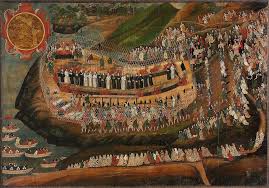 We celebrate the feast of the 500 Martyrs of Tyre on 19 February each year. Why then? It falls within a period of specifically Maronite saints: Saint Maroun on 9 February, St Mourat on 28 February, and St Yuhanna Maroun on 2 March. I think that, together with the fact I can find no reference to them in the other Church calendars, they must be remembered only in the Maronite tradition.

The Maronite Synaxarion of Book of Martyrs, as edited by Najm Chehwan, uses the only original source, Eusebius. I shall therefore begin by citing Fr Chehwan, who states:

In the year 304, the Emperor Diocletian (285-305) began to formally support paganism, and began to directly promote the persecution of Christians … a great number fell as martyrs. Eusebius of Caesarea gave details of what they endured in his history. He asked: “Who that saw them was not astonished at the numberless stripes, and at the firmness which these truly wonderful athletes of religion exhibited under them? And at their contest, immediately after the scourging, with bloodthirsty wild beasts, as they were cast before leopards and different kinds of bears and wild boars and bulls goaded with fire and red-hot iron? And at the marvellous endurance of these noble men in the face of all sorts of wild beasts?” (Eusebius, Church History, 8.7.1)

Then he continues, saying: “We were present ourselves when these things occurred, and have put on record the divine power of our martyred Saviour Jesus Christ, which was present and manifested itself mightily in the martyrs.” (8.7.2)

And he adds: “For a long time the man-devouring beasts did not dare to touch or draw near the bodies of those dear to God, but rushed upon the others who from the outside irritated and urged them on. And they would not in the least touch the holy athletes, as they stood alone and naked and shook their hands at them to draw them toward themselves — for they were commanded to do this. But whenever they rushed at them, they were restrained as if by some divine power and retreated again. (8.7.2)

Finally, all the martyrs were put to death by the sword. Rather than burying them in the earth, their corpses were thrown into the sea. This was in the year 304. Then Tyrannion, the Bishop of the Church of Tyre, and Zenobius a priest from the Church at Sidon, were sent in chains to Antioch [the seat of the Emperor] where they glorified the Lord through their sufferings unto death. The bishop’s body was thrown into the depths of the sea, while Zenobious died through the severity of the tortures which were applied to the sides of his body. That was in the year 310. Their prayers are with us. Amen.

This raises many questions: from where does the notion of five hundred martyrs come from? I can find no basis for it in any historical source, but there is a possible biblical allusion available, St Paul in I Corinthians 15:6 writes that Our Lord appeared to 500 witnesses after His death and resurrection. If this is the source, it means that the martyrs were seen as having been witness to Christ. I am also reminded of the account of the martyrdom of St Stephen in Acts 7.

There is another interesting aspect about this. Eusebius says that these martyrs were from Egypt. We are told that it was so, but not why they fled Egypt for Tyre: I can only imagine that when they fled they thought the persecution there would be less severe (Eusebius 8.6-8). But the Maronite Church has treasured the memory of these brave witnesses, and so far as I can see, they have been ignored by other Churches. (I note that the Coptic Church has a feast for St Paphnoutios the Anchorite and his 546 Companions in martyrdom, but there is no basis for identifying them with the martyrs of Tyre.

I was a little surprised to find that the Orthodox Wiki lists three individuals from Tyre who were martyred, but does not list these martyrs, and while they hailed from Egypt, neither does the page list them, only specific Egyptian individuals: https://orthodoxwiki.org/Diocletianic_Martyrs accessed 17 February 2022.

What to make of all this? There is no doubt that there was a horrific killing of Egyptian Christians at Tyre: Eusebius states that he witnessed it himself. This also tells us that the Maronites had access to his Church History. I think, since they are commemorated in February, that they were considered to have been relevant to the history of the Maronite Church. This is not because anyone imagines they were disciples of St Maroun, who had not even born when they were slain. But I suspect that as the Maronite faith spread through Lebanon, the Church at Tyre, which had some glorious days after the Great Peace came to the Church, shared with the Maronites – who had fled persecution in Syria – their empathy and deep religious feeling for these martyrs. It might be this which took the martyrs from being figures in a book to saints remembered at the altar. After all, the Egyptian Church also has Eusebius, but they have no devotion to these saints. So there almost certainly, I would say, was some other element which took them from the pages of history into the hearts of the Maronite Church. Their example of holiness and perseverance, faith, hope, and courage is all that counts – not their nationality.

As a final note, in his magnificent poem “The Wreck of the Deutschland,” G.M. Hopkins declares, under divine inspiration, that the tall German who stood praying during the disaster actually saw Our Lord in the storm. The idea that those who are dying for their faith are vouchsafed a special vision of God to sustain them in their trials goes all the way back to St Stephen. God is a completely free agent, but it seems He does show Himself to His martyrs, with quite some frequency – and perhaps he showed himself to the martyrs at Tyre.