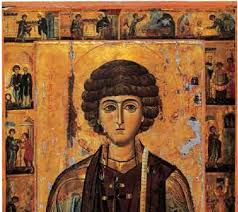 The feast of St Assya, also known as St Pantaleon, is celebrated on 27 July. I set out, in three parts, the account of his life, and then some reflections on that account and on an extraordinary story of an appearance by St Assya in our own lifetime.

Part One: The Biography

[The material below is translated from Fr Najem Chehwan’s seyar l-qiddeeseen (biographies of the saints), with some very minor editing.]

The name Bandeelaymoon or BandÄlyoon is (from Pantaleon) a Greek word, which means “All Compassionate”. But he is known in Syriac as Assya, which means “The Physician”.

This saint was born in the city of Nicomedia (present day Izmit in North-Western Turkey), then the capital of the area of Bithynia within the Eastern Roman Empire. Eustorgius, his father was an eminent pagan. His mother, Eubula, was a Christian of pure character, who raised her son, from his most tender years, according to the Christian principles for a sound life. However, she died when he was young, and his pagan father was concerned to give him a good but not a Christian education.

Graduating in medicine with distinction, as a pupil of the celebrated doctor Euphrosinus, Assya gained great fame as a physician, and was made personal attendant on the Emperor Galerius (reigned 293 to 311). Galerius grew attached to him because of his prowess in medicine, intelligence and good nature. But Assya had forgotten what his mother had taught him in his childhood, until he met the holy priest Hermolaus, who, seeing in Assya a good person, opened unto him the living faith, and the need we have for God’s salvation of not only the body but also the soul.

Assya disclosed to Hermolaus that his mother had been a Christian, but that he could not remember her instructions, for he had devoted all his attention to his studies, especially medicine. The elderly priest described Jesus to him as the All-Capable Physician, who could cure the whole person, body and soul, from even the most refractory illnesses.

The matter occupied his mind. Once, when Assya was returning home from having been with his teacher Euphrosinus, he came upon a boy who had been fatally bitten by a snake. Assya recalled the teachings of Hermolaus, and prayed to Christ to revive the lad, and to slay the snake. It was immediately done as he had prayed, and he ran at once to Hermolaus, seeking to be baptised without delay. When he told his father what had happened with him, his father was initially distraught. Eventually, however, he was won over by Assya’s goodness and the strength of his faith. When he died, Eustorgius left all his possessions to his son.

However, Assya resigned his service, sold his goods, and gave them everything he had to the poor. He now donated his services to curing the poor, to pray and to do penance for his sins. People flocked to him in crowds, among them a boy with his father. The boy had sought a cure for his eyes, but the doctors’ treatment had caused him to lose his sight altogether. Assya, when he understood this, prayed to Christ, and the boy’s sight was restored.

The other doctors heard of this, and, being jealous of Assya’s success but also being aware of his favour with Galerius, defamed him to the Caesar, Maximinus II. The Caesar summoned Assya to Nicomedia. When he refused to deny the faith, he was ordered to be burnt with torches, but the Lord caused the torches to be snuffed out. Seeing this, the Caesar asked him: “By what power are these miracles worked?” Assya replied: “By the power of Jesus Christ, the true God.” He then challenged the priests of the pagans to try and cure a sick person, while he would attempt to heal him by calling upon the Lord. The competition was conducted with a paralysed man. We are told that pagans priests could not heal him, but that when Assya said: “Rise in the name of Jesus Christ,” he did so.

Other attempts to kill him by immersing him in molten lead and throwing him to wild beasts were foiled when the Lord cooled the lead, and caused the animals to lie down before him. Assya was eventually martyred, after he heard a voice say: “Faithful servant! The desire of your heart will now be granted to you. The doors of heaven are open to you, and the crown is readied. You will now be a refuge for the courageous, and a help to those who tempted, a doctor to the sick, and the despair of the devils.” He was then decapitated, but not before forgiving his executioners, who were converted by his example. May his prayers always be with us. Amen.

Today, perhaps, we are overwhelmed by the miraculous side of the story, and are tempted to just dismiss it, and St Assya with it. But that would be a mistake.

First of all, “Pantaleon” is a well-attested name in the ancient world, and there was a Pantaleon who would be accepted as this saint, but for the miracles. That being so, the first thing is to recognise that there is a core of truth in this story: what we don’t know is how much of it is embroidery.

First let us take the miracles surrounding his death. Apart from the fact that they exhibit some of the same features as many other martyrdom story, what purpose do they serve?

At the very least, they help to answer the question: why does God allow one to die when he can prevent that death? The narrative shows God standing between St Assya and execution until, at the end, he says: “Now I will grant you the desire of your heart: I will bring you to me.”

That is, the story tells a message that death will come to everyone, that God will one day allow it, even if he works miracles on some occasions; and we cannot know when and why God will intervene in the course of history. And further, that when God does allow death to come, it is in order to bring us before him. We hope that when we are called back, it will be for the best, but who are we to dictate terms to God?

I think that there is a good chance that the stories of the confrontation with the pagan priests were influenced by the stories of Elijah and the priests of Baal, and the scene before the Caesar is modelled on other, similar, martyrdom stories.

Now that we have said that, let us consider the earlier miracles, which were healings. They involve St Assya curing people whom medicine had been unable to help, and incurring the jealousy of the pagan doctors. There is nothing at all improbably in these stories: miracle cures have been attested often and everywhere. Neither is it remarkable that others should be jealous. I would guess that they in fact accused the saint of performing the cures by the power of devils. In fact, this could explain why although the complaint began with the doctors, the trial before the Caesar featured the priests: that is, the first class of professionals brought in the second because the matter involved exorcisms.

This raises the interesting possibility that if some sort of miracle had in fact been performed at the martyrdom, the Caesar would have understood it as being a demonstration of demonic power.

So, at the end of the day, the last part of the story is certainly elaborated, exaggerated, and dressed in lurid colours; but there is no reason at all to disbelieve the rest, and much reason to honour it as teaching profound lessons about life, the purpose of death, and how we can pray for but cannot count on the miraculous.

But I have to end with a true story: the person concerned told me this story, and she was not the sort of person to make them up. She had married, and she and her new husband had made their new home. They had only just set up house, and were still decorating it. One night, soon after their wedding, she was woken up at night to see a stern man, holding a stick, standing at the foot of the bed! She could not speak. He angrily stamped the stick, and then disappeared.

Her husband continued fast asleep, but she, of course, was shocked. That day, she spoke to someone about it. He showed her a picture of St Assya. She recognised him as the vision of the night before. “Saint Assya is angry with you,” her friend told her, “because your husband is from his town, and there is no picture of him in your house.”

That day she bought a picture of the saint and put it up. He made no further appearances. But it has brought her closer to the faith.