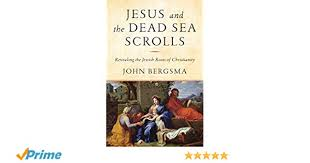 Part Three: The Eucharist and the Scrolls (Part One)

Chapter 6 is titled: “Did Qumran Have a “Eucharist”?”, and commences with Justin Martyr, describing the Christian Eucharist about the year 150, and notes that the only evidence for such meals among Jews from the time of Jesus, as opposed to later periods, is the Qumran evidence. The Essenes would dress in white linen, like priests, with the ritual bath – something which was needed before priests entered the sanctuary for worship. As Bergsma notes: “Qumran was equipped with enough ritual baths to accommodate scores of men bathing in a relatively short amount of time” (83). The Essenes’ bread was placed before them “in order,” just as Moses had placed the loaves on the table of the Bread of the Presence” (83-84), and they could not eat before the priest had blessed the food, then they seem to have sung hymns of thanksgiving (although the evidence on this is suggestive more than conclusive) so that the Essene meal was an act of worship, and:

Strikingly, each of these hymns begins with the same statement: “I give thanks to you, my Lord,” which in Greek would be eucharistô soi, kyrie mou (84).

The correspondences between this and the Last Supper include how, although the Lord often ate with an assortment of people, on the occasion of the Last Supper, He, like the Essenes, ate in a reserved apartment and only with His disciples; there was washing before the meal (which St John stresses), a cleansing which evoked the rule in Exodus 30:19-21 that priests wash their feet before entering the sanctuary; and the Lord was the priest who blessed the food at the beginning and end; blessing both the bread and the wine as the Essenes also did (84-85). But the most striking, because least expected, correspondences are yet to come. They are:

The dispute between the apostles as to who was the greatest was probably over their seating at the Last Supper, and seating according to rank was considered important by the Essenes.

When Our Lord said that the blood of the covenant would be poured out for many, this was neither an error nor a way of saying “for all,” but – as the DSS attest – it was a contemporary manner of referring to His community, His Church, for the Essenes used “many” as an allusion to their own community (86).

According to the Community Rule of the Essenes, they would meditate on Scripture and pray together for a “third of the night” after the meal. So too, after the Last Supper, the Lord and His apostles went, as was their custom to the Mount of Olives to pray together (86-87).

To partake in the “pure food of the Many”, that is, what was can now call the Essene equivalent of the Eucharist, one needed one or two more years of probation even after baptism in the “purer waters,” so that: “partaking of the meal meant full initiation into the covenant. Conversely, sin against the covenant community resulted in exclusion from the meal …” (87-88).

The Qumran community saw their daily meal ritual as an anticipation of the meal they would celebrate with the Messiah and with Israel when the kingdom of God was established – it was an expectation of the end times (90).

As Bergsma notes, these parallels do not prove dependence, in the sense that the Lord modelled His behaviour on Essene practice: he only states that they help us to better understand the Lord’s “words and gestures as if we were Jews living in his day” (87). I am not sure that is all: I think Bergsma understates the case. Although many Jews had or may have had similar practices, the accumulation of all these, most especially the meal being an expectation of the Messianic banquet, His choice of the twelve to represent Israel, plus the use of the phrase “the many” to refer to the “community” mean that the possibility of direct knowledge of Essene practice has to at least be a live possibility. The fact that long-lost Essene documents illuminate the Last Supper has to at least militate in favour of a personal connection, although it is clear that the Lord was not an Essene.

“When Was the Last Supper?” Bergsma asks in chapter 7. The starting point is the discrepancy between the accounts of Passion Week in the Gospels. As a rule, the narrative of the Synoptic Gospels (Matthew, Mark and Luke) differ in important respects from that of St John. One simple example is how Mark 14:1-3 has the anointing at Bethany take place two days before the Passover The Synoptics describe the Last Supper as being a Passover meal, but John 12:1-3 has it sixdays before the Passover (94). As we shall see, this is a significant matter, the resolution of which explains a lot about the apparent differences.

To answer this question, Bergsma goes back to the commencement of the narrative, because details casually provided there, point to how the DSS can illuminate the event. He starts with the direction of the Lord to Peter and John to meet a man carrying a jar of water, and to ask him where the guest room is, which the Teacher wishes to use (95). Now, carrying water was usually women’s work in ancient Israel, unless he was a slave, but this was apparently a free man, so it seems odd. It would be odd, unless the man were an Essence, because they had neither women nor servants, and so many Essenes lived in Jerusalem that one of its gates was known as “the Essene gate” (95-96).

A little later, a man naked but for a linen cloth will flee from the Garden of Gethsemane. Again, Essenes wore linen not wool, while other Jews were far more likely to wear wool than linen; plus, Essenes wore but one garment (96-97). If, as seems likely, this was St Mark himself, and his mother’s house was the venue of the Last Supper, then “all would seem to indicate that Jesus celebrated the Last Supper in the Essene neighbourhood of Jerusalem” (97, see also 102).

At this point, we can return to where we began: the riddle of the different dates of the Last Supper. The Essenes had a different calendar from the other Jews, just as today Catholic and Orthodox calendars place Easter and Christmas on different days. If the Synoptics date the Passover according to the old Essene calendar, then Passover was on a Tuesday. But if John was using the Temple calendar, then it occurred on the Saturday of that week (99).

Jesus, although not an Essene, was being hunted by the other Jewish groups, but there is no record of any conflict between the Lord and the Essenes (101), further, the Lord shared their criticism of how the Temple was being administered (102). It is this friction between the Essenes and the other Jews, what St John calls “the Judaeans,” which explains the way St John alone constantly refers to them as what the English translation inaccurately renders as “the Jews” (104). That is, when St John refers to “the Jews,” he is usually referring to the Judaeans, i.e. the Pharisees and Sadducees as distinct from the Essenes. Hence, the mention of the “Passover of the Jews” in his Gospel is not derisory but distinguishing: St John is writing against the background of there being two different dates for the Passover (one Essene, and one “of the Jews”) (103-104). The point is that: “The Last Supper … would have been celebrated according to the old solar calendar used by the Essenes and others, on Tuesday evening earlier in the week” (104).