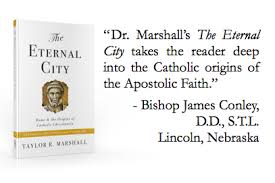 This is the third and final volume in the series The Origins of Catholicism. In some ways, it is the most original of the series. I have never yet seen anyone attempt, with such a wealth of detail, to contend that the Catholic Church (so securely based in Rome that it is often called “The Roman Church”), is what it is and where it is through the direct will of God, and not merely by some historical accident in the history of ancient Palestine.

The main thesis of the book emerges most clearly in the middle of the argument. Marshall states at p.92: “According to the Prophet Daniel, “the God of heaven will set up a kingdom,” by sending forth a “stone” to break up the Fourth Kingdom, which is Rome. That stone shall become “a great mountain and fill the whole earth” (Daniel 2:35)”

As you may guess, Marshall identifies the stone of Daniel 2:35 with Simon, whom the Lord declared to be Peter, the rock upon which He would build His Church, and to whom he entrusted the keys of the kingdom (Matthew 16:18-19). Marshall boldly attributes to the Lord the conscious fulfilment of this prophecy: “When Christ appoints Simon as Peter the Rock and gives him the keys to the Kingdom, He is effectively saying that Daniel’s prophecy concerning the coming of the Son of Man during the reign of the Fourth Kingdom is being fulfilled.”

Such an argument can never be proved, but weighty considerations can be advanced in its favour, and Marshall does so, pointing out that in Matthew 16:13, at the very start of this passage, the Lord asks Simon “Who do men say that the Son of Man is?” The title “Son of Man” was best known in Judaism from the Book of Daniel. Even using modern principles of scriptural interpretation, this is a weighty consideration. But whereas the “higher criticism” looks for proof of authorial intention, if one reads the Bible as scripture, such artificial rules are beside the point. It is a valid reading of Scripture because it does not contradict the faith or Scripture, but rather builds them, and according to the logic of typology, to associate not just one but three types (the Son of Man, rock, and kingdom) is not just legitimate but overwhelming.

Marshall is not, alas, a typologist, but he intuitively understands the logic, when he demonstrates on pp.92-93 that “Rock, therefore, is a divine name.” On pp.93-94 he nicely develops this argument: “Saint Peter bore the divine name of Rock because he represented Christ on earth. This is why Saint Peter and every subsequent Pope receive the title “Vicar of Christ.” A vicar is someone who represents another. … Peter and all successive Popes are not literally the Rock of Salvation spoken of by Old Testament writers. However, Christ appointed them to represent Him in that way, and so He built His Church upon this special office.”

The next part of the chain of reasoning comes from the memory of the Church. Many esteemed scholars have wondered about the unusual ending of the Book of Acts, and what it is that holds it together as a coherent book: after all, it seems to be two books, and it picks up a strand of story and then drops it in a manner we find disorienting today. Marshall provides the best key to this Book I have yet read – referring to Acts 23:11 (“Take courage, for as you have testified about me at Jerusalem, so you must bear witness also at Rome.”) That single verse, he suggests, I think rightly, summarises the entire Book of Acts (p.96), or at least its trajectory.

Another significant element in Marshall’s interpretation of the pertinent scriptures, is that in the Epistle to the Romans, St Paul does indeed refer to St Peter, he is the “other man” of 15:20-21. It is not essential to his thesis, but it makes it easier to accept it in the light of modern scholarship, because it deals with the objection that the Church’s tradition of its own history is by no means lacking in sound foundation, as is often objected.

In an age when biblical research is dominated by purely Western and Protestant methods and assumptions, the interpretation offered is bold. But it is not any the weaker for that. This is an accessible and well-based book, and yet it can be read by anyone with a decent education.

Let me finish by noting a few important sections: the evidence for the Nativity falling on 25 December is much better than is usually asserted (50-57); Maimonides on the Book of Daniel, and the conversion of the Lemann brothers is an astonishing and instructive story (68-69); it is significant that the Baptism of the Lord took place in the Jordan River, as a typological (my word) connection with the entry of the true Israel into the true Holy Land (73); and it is significant that the Barabbas who should have been executed but was released in the place of the Lord, had a name meaning “Son of the Father”: the true Son of God the Father was about to be crucified (77). Also noteworthy, the reason the Cross is sometimes called a “tree” (82); the Cross is a Roman symbol (84); a new name means – in its Semitic context – a new identity (89-91); the reason Our Lord took His disciples to Caesarea Philippi (94-95); the charcoal fires (106); St Peter at St Peters’ (124-132); the threefold hierarchy (142-144); Nero and the Apocalypse of St John (154-156); and the true Church is everlasting (181).

This three volume series is quite an achievement. No other study I am aware of has presented this grand vision: God prepared a people, the Jews, to receive His Messiah; and God prepared a home for the Church which His Messiah would found: Rome. The middle volume has the effect of dealing with Protestant objections to Catholicism as an “unscriptural” faith, by showing how St Paul taught the Catholic faith. Further, Marshall is to be credited for his clearly seeing what so many have refused to see – that the prophecies of the Old Testament have been fulfilled in Our Lord and in His Church. These three books are highly recommended. For seminarians and religious, I would say, they are required reading.