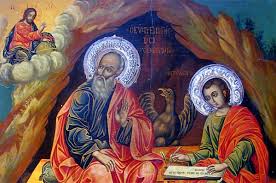 In this short article, I will be dealing chiefly with the memory of St John in the Church, and with his feast: I shall not say very much here about the Gospel, Letters, and the Apocalypse (Revelation). I refer to all these in other articles when I am dealing with specific themes, questions, or readings. However, my own view is that his understanding was the deepest of any Christian known to us. The reason others may be spoken of more is, I think, because St John is actually too deep for most of us.

St John and his brother St James, the sons of Zebedee, were known as the “Sons of Thunder” (Mark 3:17), probably because of their temperament: it is they who asked the Lord whether they should call down fire from heaven to destroy a Samaritan village which would not welcome the Lord because he was travelling to Jerusalem (Luke 9:54-56).

It is known that the brothers were, like their fathers, fishermen (Matthew 4:21-22 and parallels), although that does not necessarily mean that they were poor, or that they fished on a small scale. St John was not only a fisherman but also a priest. Eusebius tells us, in his Ecclesiastical History 3.31.3, that Polycrates, an ancient bishop from Ephesus, recorded that in that city there sleeps “also John, who leaned on the Lord’s breast, who was a priest wearing the petalon, and martyr and teacher.” The petalon is the gold plate or headband to be worn by the priests of the Old Testament, fitting onto the turban, and bearing the inscription: “Sacred to the Lord,” (see Exodus 28:36 and Leviticus 8:9). It would be interesting to work through the entirety of St John’s writings to see how his priesthood plays out in them. It may be no coincidence that it was to St John, a priest, that the heavenly worship was disclosed in the Apocalypse. It may also explain why St John’s Gospel has unique information about the activities of the priests in the trial of the Lord.

St John had been “the Beloved Disciple” (for he is the one who rested his head on the Lord’s breast, John 13:23 and 21:20). He never states that he himself was that disciple: rather, he speaks of himself indirectly. This was the tradition of the ancient Church, known to Polycrates, as we have seen.

It was St John alone, of the apostles, who was present at the crucifixion, and stood with the Blessed Virgin, and was given her as his own mother by the Lord, and then took her into his house (John 19:25-27). I wonder if it was his status as a priest which allowed him to be at Golgotha without any personal danger.

After the death of the Lord, St John was known, even to St Paul as one of the “pillars of the Church” (Galatians 2:9). There are conflicting traditions: some say that he was martyred, but others say that he was not, and lived to a great old age. I think the accounts of his surviving to die somewhere around the year 100, after having been granted the vision of the Apocalypse are too many and too ancient to be wrong. He was persecuted, but he did not die the death of a martyr.

It is often said that, given the untidy state of the final portions of the Gospel of St John, and that some of the comments there seem to refer to the author in the third person, it must have been placed in its final form by his disciples. I think that the first consideration points to exactly the opposite conclusion: editors would probably have done a better job. What is the point of trying to put some documents into order and then leaving them in a disordered state? I think it more likely that St John spoke about himself in the third person – something which many people have realised – and that it was precisely because the wonderful Gospel had been written by St John the Beloved himself, that it was left as it was. That is, no one felt that they had the authority to change it.

I will briefly note that I think he was the author of all three Epistles in his name, despite what some others may believe. Further, in common with Michael G. Michael, who won the university prize for his brilliant thesis The Number of the Beast, 666, I also think that he was the author of the Apocalypse.

The Feast of St John

The most ancient Syriac calendar, written by 411 A.D.,  had the Feast of Saints John and James (“the apostles, Jerusalem”) on 27 December, the same day as it is celebrated according to the traditional calendar of the Latin Church. This was followed by the Feast of Saints Peter and Paul on 28 December. Some of the text is missing, but not much. It appears that it had no other feasts for apostles, and only this one feast for St John. In this calendar, 26 December was the Feast of St Stephen, the first martyr, and 6 January was, then as now, the Epiphany of the Lord. Given that the present Maronite calendar has the Offering of Congratulations to Our Lady on 26 December, and that of St Stephen on 27 December, and the Feast of St James on 30 April, it seems that the original Feast of St John and James was split up into two and each part relocated in the calendar. However, while there is only one feast of St James, there are two of St John.

There can be no certainty on the material available to me, but it seems to me that the original feast of Saints John and James was intended as a feast for all the apostles – and the Feast of Saints Peter and Paul was a celebration of the founding of the Church. However, St John was allowed two feasts because he was both apostle and evangelist. And rightly so. I would even welcome a feast to remember him as “St John the Divine,” the seer of the Apocalypse: one of the most remarkable books of the entire Bible, and a wonderful demonstration of how the Old Testament is fulfilled and completed by the New Testament.