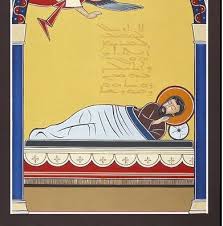 Concerning the icon for today’s feast, Fr Badwi wrote: “In a Rabbulian frame, (is an icon inspired by the (ancient Syrian icons in) British Library 7170 and Vaticanus Syrianus 559, Joseph is sleeping on his bed while the angel is (coming to earth from the) celestial circle to remove his doubts. The Syriac inscription which fills the empty space between both states: “Do not be afraid, Joseph, to take Mary as your wife for the child conceived in her is from the Holy Spirit.”

When Fr Badwi writes of a “Rabbulian frame,” he means the way that the icon is bordered by two columns supporting a canopy in the Rabbula Gospels. Here the canopy is depicting the night sky, hence in the top left and right hand sides, we see two stars rather than the sun and the moon. The “celestial circle” is the region of heaven. Here it is shown as a large circle, with inner concentric circles: heaven was believed to have seven levels. The angel is appearing from behind the spheres.

There is a direct line between the open eyes of the angel and the face of the sleeping St Joseph , whose had seems to float just a little above the pillow. His body is lying on the bed, but his mind has been lifted above the earthly level. There is an important lesson in this: in order to contemplate divine realities, we have to be grounded on the earth, but our eyes are closed to the impressions of the world to perceive the divine light, and our intellects lifted above any earthly thoughts so as to receive the mind of God.

Notice the red of the angel which is shaped like a flash of lightning or a flame of fire. Well, it is a flash of lightning, and it is a flame of fire. St James of Serug wrote of the angel who appeared to St Joseph: “The spiritual one flew and reached him swiftly to drive away all doubtful thoughts from him. In the vision of the night he approached towards him … so that in fright and with caution he might accept his words. A perturbing appearance, glorious and amazing, did he reveal and made manifest to him so that he might fearfully hear the truth from him. He blew like wind and flew on high like lightning and reached him. He was inflamed with fire, resounded like thunder and spoke with him. He became a man and brought forth lightnings from his flame.” (First Homily on the Nativity, lines 699-707). When the angel appears to St Joseph, the entire house was filled with a “cloud of fire.” We tend to think of the angel appearing like a postman with a message. But St Jacob, understanding better the nature of angels, has him assume a fearsome human form so that the splendour and power of his appearance would be its own guarantee of truth. It is a very different way to think of the angel’s appearances to Joseph.

St Jacob also adds to the Gospel accounts, the angel saying to St Joseph: “Behold, God is united with man as was proclaimed: God is with you.” (733-734). We Maronites recall these words in every Mass when the priest prepares the offerings: “You have united your divinity with our mortality, and our mortality with your divinity …”

When we think of St Joseph, we remember that he bears the name of Joseph the son of Jacob in the Book of Genesis, and like him, received dreams. Rather, according to Syriac thought, it is Joseph the son of Jacob in the Old Testament, who is named after Joseph the son of Jacob from the New Testament, the foster-father of the Lord. Consider this, in Matthew 1:16 we read: “And Jacob begot Joseph the husband of Mary, of whom was born Jesus who is called Christ.” Is that a coincidence? According to the typological way of thought, the events of the life of Christ are the very centre of history, and all of history, whether it happened before His lifetime or afterwards, takes its meaning from His life.

To our minds, which can only understand time as a line, Joseph the husband of Mary comes after Joseph the Dreamer. But in eternity, there is no arrow of time: our lives, like all of time, are only a moment in the mind of God (so to speak). That is, from the perspective of God, there is no before or after in time.

It is often asked: did St Joseph ever know Our Lady as a man knows his wife? People often find an ambiguity in the Gospel account. But the Maronite tradition is clear: the answer is no. This is an ancient tradition. St Jacob, for example, had no doubt at all. He wrote that St Joseph said to Mary: “God forbid that I should turn to marital union with you … to your purity I am submitting myself because your Son is my Lord” (758 and 762).

Another point which St Jacob notes is that, for the sake of Mary and her divine son, Joseph “endured ignominy” (a bad reputation) (1022). Coming from the same cultural world as that in which Our Lord was born, Jacob understood very well that St Joseph, as the husband of a woman who became pregnant while in her father’s house, would himself have had a bad name. In the Third Homily on the Nativity, St Jacob wrote: “O Joseph, come, show us the Father of the Child since you are treated wrongly because of Him and the truth calls out that your are not His father.” (300-301) This is an overpoweringly beautiful thought: that because Joseph was not the Father of his own foster-child, but accepted this, he can show us the true Father.

It is extraordinary to think that if St Joseph had not done as he did, Our Lady might even have been put to death because it was thought she had committed adultery (Third Homily, 309). Let us close with this meditation from the poet: St Joseph says “I am guarding him as my son, the Hidden Mystery.” Then, adds St Jacob: “Words fall silent …” (w shalyon mele), line 314.