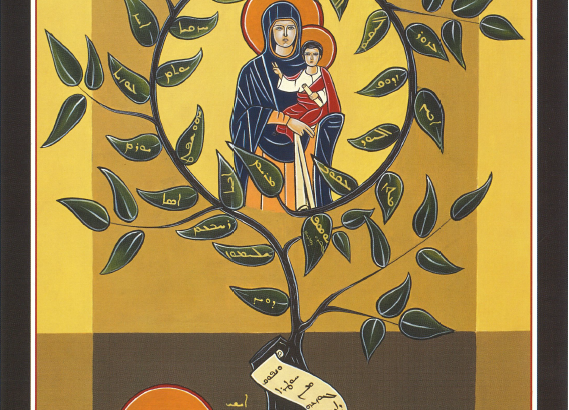 Today is “Genealogy Sunday,” the day on which the response to the Qadishat aloho changes from it.ra.7am 3a.lyn (have mercy on us), to m.shee.7o de.tee.led men bat da.weed, it.ra.7am 3a.layn, “Messiah born from the daughter of David, have mercy on us.” This simple change in the acclamation achieves four goals at once: it marks the importance of this feast, and of the Nativity which is soon to follow; it demonstrates that the Qadishat is addressed to the Lord Jesus Christ, and not the Father or the Trinity, and also makes the point, important in the Syriac tradition, that the Lord shared in the House of David through His flesh (through His Mother, because His flesh was from her.) Of the icon, Fr Badwi writes:

This icon is a personal composition from some Melkite Antiochian icons and some Romanesque and Gothic miniatures. It represents Jesse lying down, with his name in yellow letter, written just to our right of his halo. He is holding in his left hand the inscription, “There shall come forth a rod from the stem of Jesse.” Behind him, the stump sprouts green drawing out in a circular form around the mother of God (in the fashion of Our Lady of Elige) carrying the Saviour of the World. On the green leaves are written the names of the patriarchs from Jesse to David to Joseph the husband of Mary from whom Jesus was born. The base of the family tree is set in a dark rectangle, as if planted in the earth. But the branches and leaves of the Old Testament figures are against the same coloured background as Jesse, indicating that they belonged to the same age as he did. The Virgin Mary and her Holy Child are set against a bright background, representing the New Testament which brings all the mysteries of the Old Testament to light.

The reference to the rod of Jesse is a quote from Isaiah 11:1, where the “rod” here is a shoot or a branch. The Lord’s family tree comes from the side of Jesse, while he looks as if he is enraptured, holding his right hand to his eyes as if he is looking into the distance. He is in fact gazing into the future, foreseeing the fulfilment of God’s promise to him.

It is an extraordinary icon: the simple device of writing the names on individual leaves both shows the individual value of each of these names, but does so without having to produce a lengthy list of names which would intrude on the pictorial content. Rather, text and illustration are perfectly melded together. It shows us the ancient past and the eternal reality of the Incarnation in one simple image, using filled-in rectangles of different colours to comment on and interpret the relation between the Old and New Testaments.

In today’s Gospel, St Matthew reveals the genealogy of the Lord. It often presents a puzzle to people: why do the genealogies in St Matthew and in St Luke have so little in common? The short answer is that the genealogy in St Matthew is almost certainly the royal line, while in St Luke, we have the family line of the Lord. That is, St Luke tells us about the Lord’s family line. He clearly indicates that the Lord was only thought to be the son of Joseph, and that Joseph was the son of Heli, all the way back to “Adam, the son of God.” This answer, was expounded in some detail in Lord Arthur Hervey’s brilliant The Genealogies of Our Lord and Saviour Jesus Christ … (Macmillan and Co., Cambridge, 1853). In that book, Hervey (himself the Anglican rector of Ickworth) also showed that the difference between the two genealogies was not, as Protestants often said, that St Luke traced Our Lord’s line through Our Lady.

Now, there was not always a king on the throne of David, but – points out Hervey, there was a  Davidic succession. He therefore states:

… sixteen of the middle generations are a succession of kings who reigned over the house of Jacob, and that after a further succession of twelve private individuals who were not kings, the list closes with the name of Him who was ‘born King of the Jews.’ But as the whole period that those twelve private persons lived, the royalty of the house of Judah was violently suppressed, it is natural to conclude that they are the persons who would have been kings on the throne of Judah … had the throne of David continued to stand. (11)

Also, despite the terms of St Matthew’s Gospel, which we shall come to later, Jeremiah 22:29-30 tells us that Jehoiachin – who is said to have begotten Shealtiel – was in fact childless. This is important, because there was no lineal descent after Jehoiachin, and it is precisely here that both the genealogies of Ss Matthew and Luke present identical names: Salathiel and Zerubbabel. As Hervey concluded: “… Jehoiachin’s line was supplied by heirs taken from another line … the line of Nathan, as we learn from St Luke.” (19) That is, St Luke gives the lineal descent (to prove the right of succession as given by St Matthew), and so St Joseph must have been the legal heir to Solomon’s throne, while not being his descendant. (22-26) This double genealogy of birth and right to the throne where the double line is not identical, was known in the Old Testament: Hervey provides examples (26-36). He concluded: “… it is in accordance with the customs of the Jews … that a person possessing an inheritance which he did not derive from his direct male ancestors, should have a double genealogy, one that of his real progenitors, the other that in virtue of which he inherited.” (36)

There are some other powerful points, but I shall omit them here. What is most interesting to me as a Maronite, is how Lord Hervey, an English peer worked out the importance of Our Lady not from theology but from history, thus writing that both genealogies are those of Mary, too:

For if the Matthan of St Matthew is the same individual as the Matthat of St Luke, it follows that Jacob and Heli were own brothers. And if Mary were the daughter of Jacob, and Joseph the son of Heli, Joseph and Mary would be first cousins, grandchildren of the same grandfather Matthat. And if Jacob had no son, but only daughters, and his male heir and successor, as head of the tribe of Judah, were his brother Heli’s son Joseph, we are quite sure, from the constant practice of the Jews, that Joseph would marry Mary: just as the five daughters of Zelophehad married their five cousins, Numbers 36:11, and as the daughters of Eleazar, the son of Mahli, were married to the sons of Kish, Eleazar’s brother, 1 Chronicles 23:22. Compare also Tobit 1:9; 3:15-17; 6:10-12.” (57)

And in footnote 1 on that page, he writes: “It is important to observe, how strong even in the captivity, when there could be no land to inherit, was this feeling, that a daughter should marry her next of kin.” Further, even the fact that Mary and Joseph both dwelt at Nazareth before their marriage (Lk 1:26, 39 and 2:4-5) is an important details: if she was of the tribe of Judah, then the best way of accounting for two families from the tribe of Judah living at Nazareth in the territory of the tribe of Zebulun, is that “they were near relations whose common ancestor had for some reason come to reside there.” (58)

Now I had prepared a good deal of material from the Ancient Near East, such as the Assyrian King List, to show that King List of the Lord should be read as what it really is ­– a Near Eastern document written according to the ideas and beliefs not of the Greeks and Romans but of the ancient Semitic world. But that, and some other fascinating points would make this post too long. Next year, perhaps.