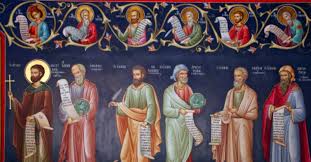 Collect   O almighty and everlasting God, who governs all things both in heaven and on earth: mercifully hear the prayers of Your people, and grant us Your peace in our time. Through our Lord Jesus Christ

Epistle (Romans 12:6-16) Brethren: Having different gifts, according to the grace that is given us, either prophecy to be used according to the rule of faith; or ministry, in ministering; or he that teaches, in doctrine; he that exhorts in exhorting; he that gives, with simplicity; he that rules, with carefulness; he that shows mercy, with cheerfulness.   Let love be without dissimulation. Hating that which is evil, cleaving to that which is good, loving one another with the charity of brotherhood, with honour preventing one another, in carefulness not slothful, in spirit fervent, serving the Lord, rejoicing in hope, patient in tribulation, instant in prayer, communicating to the necessities of the Saints pursuing hospitality. Bless them that persecute you. Bless, and curse not. Rejoice with them that rejoice, weep with them that weep, being of one mind one towards another, not minding high things, but consenting to the humble.

Gradual   The Lord sent His word, and healed them: and delivered them from their destruction. Let the mercies of the Lord give glory to Him: and His wonderful works to the children of men. Alleluia, alleluia. (Ps. 148:2). Praise the Lord, all His Angels: praise Him, all His hosts. Alleluia

Gospel (John 2:1-11) At that time there was a marriage in Cana of Galilee: and the mother of Jesus was there. Jesus also was invited, with His disciples. And the wine failing, the mother of Jesus said to Him: They have no wine. And Jesus said to her: “Woman, what is that to Me and to you? My hour is not yet come.” His mother said to the waiters: “Whatsoever He shall say to you, do.” Now there were set there six water-pots of stone, according to the manner of the purifying of the Jews, containing two or three measures apiece. Jesus said to them: “Fill the water-pots with water.” And they ﬁlled them up to the brim. And Jesus said to them: “Draw out now, and carry to the chief steward of the feast.” And they carried it. And when the chief steward had tasted the water made wine, and knew not whence it was, but the waiters knew who had drawn the water, the chief steward called to the bridegroom, and said to him: “Every man at ﬁrst sets forth good wine, and when men have well drunk, then that which is worse; but you have kept the good wine until now.” This was the beginning of miracles Jesus performed Cana of Galilee: and manifested His glory, and His disciples believed in Him.

Offertory   Shout with joy to God, all the earth: sing a psalm to His Name: come and hear, all you that fear God, and I will tell you what great things the Lord has done for my soul, Alleluia

Secret Hallow, O Lord, these our oblations: and cleanse us from the stains of our sins. Through our Lord Jesus Christ …

Communion The Lord says: “Fill the water-pots with water, and carry to the chief steward.” When the chief steward had tasted the water made wine, he says to the bridegroom: “You have kept the good wine until now.” This ﬁrst miracle did Jesus in the presence of His disciples.

Postcommunion May the working of Your power, we beseech You, O Lord, be increased in us: that quickened by the divine Sacraments we may be prepared by Your grace to obtain what they promise. Through our Lord …

The WEDDING at CANA

St John was surely inspired: he tells us so much in so few words. In the Gospel itself, although not in this extract, he tells us that this wedding occurred “on the third day”, which I suggest means the third day from the Baptism of the Lord.[1] Then, he states that the Mother of Jesus was present at that marriage. The fact that St John does not mention St Joseph indicates that he had died by that time. In ancient Semitic society, and even in our time, it is unthinkable to invite the wife but not her husband when he is alive. That Our Lady had been invited also tells us that she was almost certainly related to the family of the bride or the groom, or both, especially as they were not from the same town. It is usually relatives who would invite someone from another town, especially a widow. Once more, Semites are unlikely to invite a widow to travel from one town to another. This would also explain why in John 2:5, Our Lady tells the servants to listen to the Lord. Unless he was somehow related to the family, she would hardly have dared to give orders to someone else’s servants.

This also tells us that the Lord was probably related to the bride or the groom, too. But the disciples had also been invited (John 2:1). Although it is possible that some of them were related to the bride or groom, or were great friends, it is also possible that one or both of the couple were themselves disciples of the Lord, and so invited the other disciples. If this is true, it also provides the context for Our Lady’s giving instructions to the servants to do what Jesus told them: the Lord was already the Master of their master. It also highlights her role: by being at the beginning and the end of the Lord’s ministry, St John associates her with all of it.

In other words, I am not sure that usual picture of Our Lord and His Mother being anonymous guests at some huge function is correct. Reading it from the Middle Eastern perspective, I rather suspect that they were closely related to the family and already in a position of spiritual as well as natural authority. This also means that there was already faith in that family. So often the Gospels state that it was because of their faith that a person was healed. Here, too, it may be that the faith of the bride and groom was a factor. It would also mean that this first miracle, or “sign”, was to raise the faith of the disciples to another level.

Another interesting aspect is how St John tells us: “… there were set there six water-pots of stone, according to the manner of the purifying of the Jews … (and) Jesus said to them: “Fill the water-pots with water. And they ﬁlled them up to the brim.” It is well-known that the jars here stand for the Jewish faith. The Lord says to fill them to the brim, and then He changes the water into wine. This is not only to indicate that the “water” of the old order becomes the “wine” of the new religion, it also shows that Our Lord fulfilled the Jewish faith. And He fulfilled it by giving us the greatest wine of all – the truth faith.

The chief steward was so moved by what he saw that he went and spoke to the groom himself, to say how generous the groom was. Now, the thing is that it is not just a mistake: we know that the groom did not make the wine himself, in fact he knew nothing of it. But he was the channel of God’s work. And so are all of us in whatever we may do which is good – we are nothing but channels for the work of God.