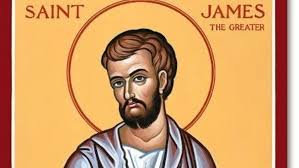 St James, whose feast we celebrate on 30 April, is an important saint in the Maronite tradition, not only because he was an apostle, but also because he was particularly associated with the Aramaic and Syriac current within Christianity. There is a tradition that he preached the Gospel in Antioch. It is striking that the epithet Our Lord gave to Ss James and John was an Aramaic one: Boanerges, which literally means “sons of rage” (being a Greek attempt to render bene regesh). This indicates that the language they were speaking among themselves was Aramaic.

This is perhaps why the name “James” was so popular in the Syriac tradition. The Syriac Orthodox tradition used the name so much that it practically became identified with the Syriac Orthodox. When I was in Lebanon, clergy at Karam Saddeh, told me that you can assume that if a church or monastery in North Lebanon was named “James” then it was initially Orthodox. This may well have been the case up to the early modern period (i.e. to about 1600).

Now, this would also explain why one of the main anaphoras in the Maronite tradition is the Anaphora of St James, and it is thought that this anaphora came to us from Jerusalem, because Jerusalem had a significant Aramaic element. However, it is not possible to know which of the three saints named “James” we should associate this anaphora with. There were three saints “James” in the time of the Lord: St James the Just, the brother of the Lord (i.e. His cousin), who was the first bishop of Jerusalem, and wrote the Epistle with his name; St James Alphaeus also known as St James the Lesser; and St James the Greater, the son of Zebedee and brother of St John the Apostle, the Beloved) who was also present at the Transfiguration.

St James must have been well known in Jerusalem, because St Luke tells us that when Herod had James the brother of John put to death by the sword, it pleased the Jews (Acts 12:1). Since Herod died in 44, St James must have died in or before 44. Now, as beheading was illegal among the Jews, he was probably stabbed through the body with a sword. This indicates that he may have been a Roman citizen, and hence had to be put to a speedy death. Hippolytus (170-235), or someone using his name, records that St James was buried in Judaea.

There is a later tradition that before he returned to Jerusalem where he was martyred, St James preached in Africa, and also in Spain, hence the great centre of St James Compostela.

He is the patron saint of hospitals, orphans, pilgrims, and the grain crop. But I prefer to see him as a patron for those dealing with anger, and especially with what they wrongly think is righteous anger.

While he is often mentioned in the Gospels, he is always in the company of others, but we do know that he and his brother were the “sons of thunder.” Clearly, John and James were so zealous for the Lord that they were irascible. We know nothing else about him. Yet even this is something, for we can see from the letters of St John that although he was a “Son of Thunder,” yet he became an apostle of love. The very force which was improperly applied as wrath as against those who would not hearken to the Word, became a force of love. Once the desire to seek revenge, or to punish is removed from us, it makes space for our better feelings to thrive.

I feel certain that St James did in fact deserve the epithet Our Lord gave him, but that he justified Our Lord’s confidence in him by outgrowing it. This is quite an accomplishment. One of the most frequently found weaknesses among we humans is the desire to be vindicated, to be seen to be in the right, and to correct and even to punish those who have disagreed, opposed, or thwarted us. This desire to “put them in their place” is an aspect of self-love. Self-love is extraordinarily sensitive. It is ready to take offence before any has been given, and it even turns on us: so much we do love ourselves in the wrong way that if we make a mistake we hate ourselves for letting ourselves down.

But there is a particularly dangerous form of vindictiveness: I call it “self-righteous anger.” Righteous anger is anger in the cause of the good. But self-righteous anger is anger which is excused by the pretext that it is in the cause of the good. So often, people wish to do good, but ego comes in and then one brooks no opposition, one even expects everyone else to drop whatever else they have to do and help them. How often have we encountered people ostensibly working for a charitable cause who get upset if you won’t support their charity? This is actually hypocritical if done by Christians, because as St Paul explains, charity is the fundamental virtue, and without it, all others are as nothing (I Corinthians 13:1-3). Perhaps St James’ greatest accomplishment was overcoming a tendency to “self-righteous anger.”

We must be in the right if we see St James has having had his fault shown to him by the Lord, and as having overcome it. He is a good saint to remember. May his prayers be with us.