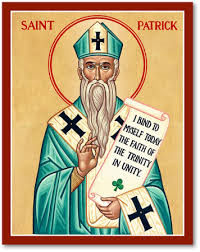 St Patrick tells us that his father was a deacon, and his grandfather was a priest. They had a small estate outside a village, so they were probably not poor. He was kidnapped when he was about sixteen years of age, and taken to Ireland. There he was put to work as a shepherd. In slavery, he turned his heart to God, rather than giving in to despair. It is when he was in trouble, not when things were hardest, that he sought help from God: and what is more, he found it. He says:

(16) … when I had arrived in Ireland and was spending every day looking after flocks, I prayed frequently each day, and more and more the love of God and the fear of him grew, my faith was increased, and my spirit was quickened, so that in a day I prayed up to a hundred times, and almost as many in a night. Indeed, I even remained in the wood and on the mountain to pray. And – come hail, rain or snow – I was up before dawn to pray, and I sensed nothing of evil nor any spiritual laziness in me.

He says that looking back on his life after he had been made bishop and served the people of Ireland, he thanked God for his slavery:

(28) … this captivity was very good for me for I was corrected by the Lord, …he prepared me for what I am today …when I have the pastoral care, and many duties for the salvation of others, but at that time I was not even concerned for myself.

One night he heard a voice tell him that he had been fasting well, and he would soon be returning to his homeland by ship. He ran away, and trusting in God, kept going until he came to a boat. When he asked for permission to sail with them, the master of the ship aggressively refused. As he went away, he began praying, and before his prayer was finished, the sailors called him back to sail with them. After they had landed in Britain, they ran out of food. His companions from the ship, who were all pagans, mocked him, asking how his God could leave them to starve. Patrick told them to pray, and almost immediately, a herd of swine appeared, which provided them with the food they needed. (Note that God sent the pigs: they still had to do the work of catching, killing, and cooking them.)

When he returned to human society in Britain he lived a free life, but was again made captive, and now a voice told him that he would be freed after two months. In exactly sixty days he was freed once more. He was able to return to his parents. After everything he had been through, they wanted him to never again leave them. But he had a dream in which a man came from Ireland, with letters. He opened one, and read the words: “The voice of the Irish”. Immediately he heard the voices of the Irish, begging him to return to their country. He later had another dream, where he heard words saying: “He who given his life for you is speaking within you”. That is, the voice said that Our Lord Jesus Christ was speaking within Patrick. No wonder he awoke from that dream full of joy.

When travelling through Ireland, converting people to God, he was buffeted with insults and placed in chains. Although he lived with the daily fear of being assaulted, made captive again, or killed, he prayed that God would not let him be separated from the people whom he had brought to Him. St Patrick could put up with these trials because he had a supernatural aim and purpose in his life.

Hardship and the Sugar-Coated Society

We can learn from St Patrick the value of hard jobs, and that we can put up with them if we remember our supernatural aim. Today we live in a sugar-coated society. It is a society which expects everything to be easy. When we give in to the sugar-coated mentality, we take the short-cuts, we worry about looking good rather than being good. When something hard to bear happens, we ask: “Why me?” We whinge, we complain and we moan. We take it out on the person who tells us the bad news we don’t want to hear. If someone gives us constructive criticism, we should thank them for telling us. But how often do we cut them, rather than facing let alone admitting the truth? After all, the truth always hurts, and the sugar-coated society does not want any hurt. So badly does not it not want to feel any pain that it is prepared to do without the truth.

How many of us could have faced captivity the way St Patrick did, and yet have turned more and more to God? How many of us can even face doing the housework: we cry and complain that everyone leaves it all to us, or we ignore our parents asking us to get up and help them. But to do the small everyday things which have to be done, and to do them out of the love of God, and without complaint, is a good straight road to holiness. It is a road we can walk every day.

Just going to work, whether in the office, factory or shop, can be very hard. But every trade, profession or labour has its own value and an inherent dignity. It may be tiring, boring and frustrating. Those we work with may be unlikable and unpleasant. But I have a duty to discharge my job as best I can. It isn’t just a question of having to earn my pay. My job is more than a contractual obligation: it is a Christian duty to be honourable, and the less honourable the other people are, the more credit is due to me, and the more scope there is to unite my sufferings to those of the saints.

A person without any duties or any responsibilities runs the great danger of lacking purpose in his life. Responsibilities keep us focussed on reality. Duties make us listen to our conscience: have I discharged my obligations to God and to man? Just as our bodies weaken more quickly without exercise, so our spirits lose will-power and courage if our power of making decisions and carrying them through is never put to the test. If we never face our fears and apprehensions, if we are always escaping, how shall we develop bravery? Wealth can make me happy, for a time, but fulfilled, never.

Great St Patrick said that all his trials had made him worthy to offer the sacrifice of the Mass with confidence (34). Can we imagine that? What a different attitude that life that is. One does not have to be a priest in order to benefit from this: those of us who are members of the laity can apply it to ourselves. How? By seeing that all my trials can make me, a lay person, worthy to attend and assist at the sacrifice of the Mass with confidence –if I accept them for the love of God.

It is easy to look around and say that Ireland needs another St Patrick. And it is true. But so does Australia. St Patrick saw that before he had been captured he had not cared about himself, meaning about the benefit of his eternal soul. But if I do care about my soul, I will look to see where my duties lie. If I accept to do my duty, then by that very fact I will find my purpose in life. We all have a private work of sanctification and a public work of conversion of souls to do.