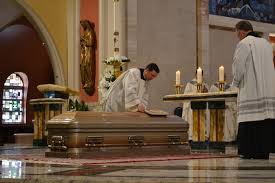 “The Troubled Spirit of Tintern Abbey” is an interesting story from Lord Halifax’s Ghost Book (1936, pp. 201-204), chiefly because it relates to Purgatory and the effectiveness of Masses for the faithful departed. It is even more curious in that while it purports to have been sent to the Second Viscount Halifax (1839-1934) by an Anglican cleric, it gives testimony in favour of the Catholic Church and Masses for the Dead. I set out the story, and then my observations.

“It was, I think, in the spring of 1895 that my wife and I went for a bicycling tour along the Wye.” So the tale begins. Touched by the “beauty and mystery” of the ruins of Tintern Abbey, the writer asked his wife, whom he believed to be psychic, whether she had any special “feelings”. This led to a “conversation” with a disembodied spirit who sent his messages by rapping when the lady, wo was running through the alphabet, came to the appropriate letter. To be brief, he “said” that he was a soldier who had been slain defending Henry II (reigned 1154-1189), and been buried without any prayers being said over him.

Significantly for Catholic doctrine, this spirit added that: “… though, like most people, he had been neither very good nor very bad, and was not unhappy in his present state, he would be infinitely easier if a Mass could be said for him.”

When they objected, inter alia, that they were Anglicans and did not believe in Masses for the deceased, he replied that: “he had frequently, but without success, tried to communicate with his descendants and others …”, and that their religion did not matter: the Mass was what mattered.

Intrigued, they wrote to a Catholic priest asking if the Mass could be said. That day, they returned to the Abbey, but nothing happened. However, that evening, the spirit “spoke” again, to thank them, and to ask for two Masses.

They soon heard from the Catholic priest, who promised to say four Masses. Ten years later, they were at dinner with five others, including two women believed to possess “remarkable psychic powers”. They held some sort of séance, and his wife received the message “very many thanks for the Masses said”.

It is the sort of story one could dismiss out of hand because there is no way of establishing its veracity, and even if there were, who is to say the man and his wife understood what had happened to them? After all, if it were possible once, whole could it not happen more often?

There are at least four considerations here. First, we are speaking of the miraculous, the manifestations of the laws of a higher world within this world. It is necessarily impossible for us to demand that the miraculous should manifest in any way we would understand or expect. Ouspensky dealt with the surprising and even unpredictable nature of the miraculous very well in A New Model of the Universe. Analogously, the randomness of the quantum world seems unfathomable even inconceivable to us. How can electrons be in two places at the same time? Yet, it seems to be so: http://bigthink.com/dr-kakus-universe/nobel-prize-awarded-to-two-quantum-physicists

Second, we do not really understand how the communication took place: the story makes it seem straightforward, but this must be apparent rather than real. The spirit said that he had been trying to reach people. Perhaps the circumstances, including the qualities of those present, need to be just right. Why can the spirit “rap” but not speak? Why could it communicate in modern English although it had died almost eight hundred years before? Why does this not happen more often? Does the spirit communicate with the people wordlessly, but they interpret the communication as rapping and as English? Could this be an unconscious variant of how I can hear someone speak a language I don’t understand, and put their words into English? We do not know, but neither can we be dogmatic. I can understand why people might want to dismiss the story out of hand.

The third consideration is how well this story fits Catholic teaching. First, that like most people, he was neither saintly nor evil, and is in need of prayers, and although he is happy to be where he is, his position would be improved by Masses. This sounds to me true of Purgatory: imagine the relief at realising that you had escaped hell! And the Church has always taught that the efficacy of the Masses does not depend upon the belief or the intention of the people who ask for them to be said: the Mass in itself objectively works wonders! Yet, if those who attend the Mass do believe, and do intend, and do earnestly pray, then of course the effect may be yet greater. As I mentioned at the outset, the people concerned do not appear to be at all Catholic. In fact, no good Catholic would get involved with psychic activities, although good Catholics do pray for those poor souls in Purgatory who have no one to pray for them.

The fourth consideration is that something just like this in all significant respects, happened to someone I know as well as myself. He was awakened one night, and one night only in his many years of life, by an apparition. Let us pass over some of the details. He thought it might be a demon. He made the Sign of the Cross three times, but nothing happened. He then wondered: the apparition does not seem threatening, just in great sadness. Could it be a soul from Purgatory? He prayed for the apparition, which immediately disappeared, leaving behind now a sense of “gratitude”. He later learned that someone who had lived there had suicided.

I never dismissed that story out of hand. It ties in well, too, with the one old to Lord Halifax. No one else’s contact with the miraculous can ever be fully persuasive for us: persuasion depends too much on personal experience. Yet, even so, considering these stories can give us some confidence in our Maronite practice of saying Masses for the dead, a practice which is supported by the Bible (2 Maccabees 12:46; and by inference from Matthew 5:26 and 12:32 and Luke 12:59), and most clearly by the teaching of the Church.