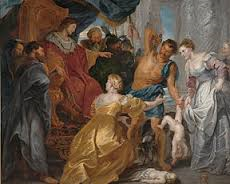 Having looked at Ode 1 of the Odes of Solomon, we now come to Ode 3, for Ode 2 is missing. It is not possible to know how many lines are missing from the beginning of it. However, my translation, based on that of Charlesworth, but by no means uncritically, reads:

6.      And I shall be no stranger, because there is no jealousy with the Lord Most High and Merciful.

7.      I have been mingled with Him, because the lover has found the Beloved, because I love Him that is the Son, I shall become a son.

8.      Indeed he who is joined to Him who is immortal, truly shall be immortal.

10.  This is the Spirit of the Lord, which is not false, which teaches the sons of men to know His ways.

11.  Be wise and understanding and awakened. Hallelujah.

The first extant words are malbeš-no, “I am putting on …”. But what is being put on? Scholars conjecture that it is the “love of the Lord”, and that may well be correct. But there is no real proof. I prefer not to guess, after all, we should always be open to the possibility that we could be surprised, or the poet could have included something unexpected.

The scholars do not really address these questions. However, I shall be suggesting in an academic article that the answers are found in the First Epistle of St John, and that the Ode as a whole can be illuminated by that Epistle. I shall not give all my reasons here, but my conclusion is that the “members” are the people of the Church. I suggest that this can be understood by reference to 1 John 1:3-4: “We proclaim to you what we have seen and heard, so that you also may have fellowship with us. And our fellowship is with the Father and with his Son, Jesus Christ. We write this to make our joy complete.”

The word translated “I am hung” is the masculine singular participle tle. It can also means “I am suspended, I am raised up, I am lifted”. The meaning is that by being part of the Church, we are incorporated into something greater and higher than ourselves. In 1 John 2:29-3:1, this aspect of our common salvation in Christ and status as his children is mentioned: “… everyone who acts in righteousness is begotten by him. See what love the Father has bestowed on us that we may be called the children of God.”

This is supported by the third surviving line, which irresistibly reminds us of 1 John 4:10: “This is love: not that we loved God, but that he loved us …”, and of 4:19 “We love because he first loved us.”

Line 4 develops the thought of the line before by reminding us that if we have never known love, we could not recognise it as being what it is.

We have what is probably a reference to the waters of baptism in line 5: the waters of Psalm 23 (“The Lord is my shepherd …”) were seen as the baptismal waters in the early Church (this is an aspect of what is called typology). However, it may also be a reference to 1 John 3:19, to which I am coming now.

Why should this line say “I love the Beloved, my soul loves Him”? Is it just repeating itself for no good reason? I think that the answer is found if we also take the next line, with 1 John. In line 6, we read: “And I shall be no stranger, because there is no jealousy with the Lord Most High and Merciful.”

This is how we know that we belong to the truth and how we set our hearts at rest in his presence: If our hearts condemn us, we know that God is greater than our hearts, and he knows everything. Dear friends, if our hearts do not condemn us, we have confidence before God and receive from him anything we ask, because we keep his commands and do what pleases him. And this is his command: to believe in the name of his Son, Jesus Christ, and to love one another as he commanded us. The one who keeps God’s commands lives in him, and he in them. And this is how we know that he lives in us: We know it by the Spirit he gave us

I would suggest that this is why the Odist declares that “I” love God, and “my soul” loves Him, too. Because “soul”, there, is the equivalent of “heart” here. This passage may also explain the talk of “stranger” and “jealousy”. He is not quoting 1 John, but rather restating the idea that we belong to the truth because God is generous (which is found in 1 John) in negative terms: I am not a stranger because He is not jealous. In addition it is not impossible that the Odist is denying that one must become a Jew to become a Christian.

Verse 7 obviously picks up themes from 1 John , especially in 3:1 (“See what love the Father has bestowed on us that we may be called the children of God.”).

I must pause here to make two points about the Syriac text which are lost in translation. First, the same root word is used in verses 4 and 7 for “be able” and “find”. The root meaning of the Syriac root š-k-H is “to find”, but it can be developed to mean “found capable”. The point is that the one who is “found” to discern true love is the one who has “found” the beloved.

In other words, love of God is a journey of discovery at its beginning and not any less, at its end. The connection is made in the Syriac poetry but is lost in the English.

The second point about the Syriac is that the word translated here as “mingled” and by most scholars as “united” (although Franzmann notes its literal sense) is the very word we use today for the mingling of the Eucharistic offering (the Arabic mazeej). In other words, when you read this Ode, bear in mind that it is probably speaking of union or, better “mingling” with God through the Eucharistic mystery, first and foremost.

As we near the end, from speaking of “love”, verses 8 and 9 move to speaking of eternal life. This progression, from “love” to “life” is, once more, the same progression we find in 1 John, e.g. 1 John 5:11-13: “The testimony is this, that God has given us eternal life, and this life is in His Son. He who has the Son has the life; he who does not have the Son of God does not have the life. These things I have written to you who believe in the name of the Son of God, so that you may know that you have eternal life.”

Another allusion to 1 John is found in the next verse: “This is the Spirit of the Lord, which is not false, which teaches the sons of men to know His ways.” The word for “false” is dagolooto (dagālootā), which is the basis of the Syriac word for “Anti-Christ” found in 1 John 2:18 and 22 and 4:3, and for the spirit of falsehood in 1 John 4:1: “Beloved, do not believe every spirit, but test the spirits to see whether they are from God, because many false prophets have gone out into the world.”

To be speaking of the Anti-Christ and the Spirit of falsehood is not common. I do not think that these similarities can be accidental.

Verse 11 of this Ode is short but strong: “Be wise and understanding and awakened. Hallelujah.” There may be an echo of 1 John 5:20-21 here, but it not so strong as the other parallels.

It is good to ponder poetry like this, and while we’re at it, to deepen our acquaintance with the First Letter of St John.

Joseph Azize, 3 December 2016 (Happy birthday ya Habeebee: you know who you are)