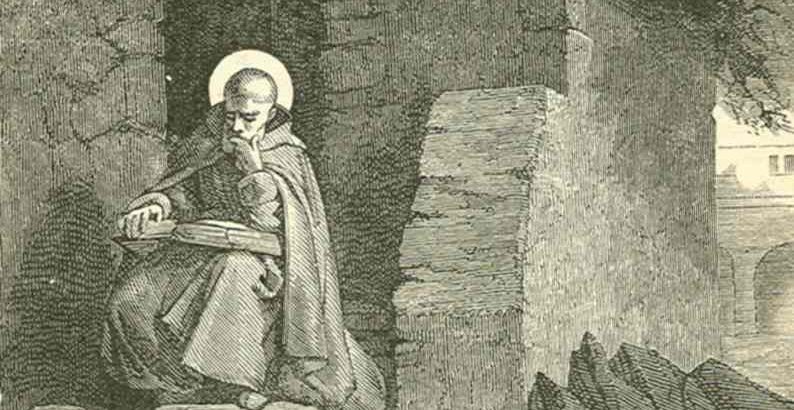 I have spent some time enjoying the great stock of new volumes on the shelves of the much beloved Fisher Library: it is one of the great innocent delights of January, browsing the new books at Fisher. Recently, I came across what seemed to be a fairly ordinary book by Bryan M. Litfin, Getting to Know the Church Fathers. But when I saw that this was an Evangelical Christian who was staking a claim that the Fathers were Protestants, I had to look at it again. Then I noticed the chapter on St Ephrem and I decided to borrow it. I am glad I did. I do not demean Litfin: his scholarship is sound, although some of his “contemporary comments”, especially his anti-Catholicism are downright silly. Further, Litfin enjoys better bibliographic resources than I do, and I found some useful references. But most of all, I found this gem by Jacob of Sarug, speaking about St Ephrem:

Our sisters also were strengthened by you [Ephrem] to give praise;

For women were not allowed to speak in church.

Your instruction opened the closed mouths of the daughters of Eve;

And behold, the gatherings of the glorious [church] resound with their melodies.

Behold, a new sight of women uttering the proclamation,

and they are called teachers among the congregations.

For yonder in the kingdom, men and women are equal.

You laboured to devise two harps for two groups;

You treated men and women as one to give praise.

The background to this is that it was apparently St Ephrem who introduced female choirs into Christianity (at least in the East). What struck me about this was not only the way that, with typological insight, Jacob sees this innovation as pointing to the future life in which there is no male, no female, but more, the last line: “You treated men and women as one to give praise.”

That is how we should treat all people, as being equally able to praise God. St Ephrem raised women to the choir. But it does not end with justice for women.

Too often, women, and even some men, have discriminated against men, as if that somehow makes up for, and can be justified by discrimination against women. If hatred of women is wrong, and of course it is, then so too is hatred of men. The same applies for cruelty and unfairness. Men should not abuse women, and women should not abuse men. Some men have been violent to women, but equally some women have been violent to men: and in both cases, the violence can be physical, emotional or both. Whatever direction the violence goes in, it is equally wrong. The violence against women was hidden for too long. But it is starting to come into the light now. I am not sure that the same is true for the violence against men. I knew a good, decent man, who went to his grave broken-hearted, unable to understand what had happened to him. His wife had been a bully. She had taught his own children to hate him. Too late she learned that in teaching them to hate their father, she had taught them that they could also hate her. But that is not really the point of this article, although it is an important truth that hatred cannot be confined.

The lesson can easily be applied elsewhere. I am a Catholic priest. I believe that God is a Trinity. That means I do not accept other views, such as the Muslim, Jewish and Hindu. But I can respect them, wholeheartedly, and love them as Our Lord taught us to love, for the love of God. Perhaps it helps in this to remember that God would “treat all men and women as one to give praise.” And we can think of them that way.

Modern technology has made the former differentiation of men and women in some ways obsolete. This is not complete of course. Biology cannot be denied without heavy penalty. But whereas women would bear many children, and almost had to in order to continue life, those days are gone. Women do not have to bear children at all, and if they do, there is more likely a financial penalty than the opposite. And even if they do have children, the children can now be put in care while they work (and frequently they can work from home). Many jobs were once too hard for women. Few jobs are too hard for them today. Women’s work was once time consuming. Today, it is chiefly so by choice.

But these are not the only changes in the world: the contemporary world is witnessing an unprecedented mixing of the peoples. This may not be accidental. The mingling of races, nations and tongues may be Providential. It may be the work of a higher than human intelligence which operates through political and social upheavals.

If this is so, then the purpose can only be to put us in a position where our very survival demands we find a way of living together.

It is impossible to remove all Muslims from Australia, even were it desirable. And it is impossible for them to remove all people of other religions. There is nothing for it, if we are to have a human and humane future, we need to find how to live together not only tolerantly, but with positive respect for one another. This would be a step, at least, in the direction of love.