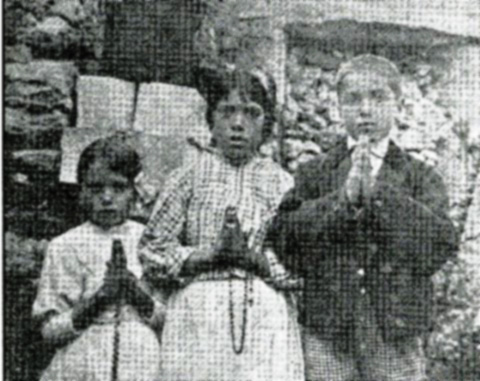 I am very pleased that Pope Francis has canonised Francisco and Jacinta Marto, two of the seers of Fatima. After the apparitions of 1917, both died of influenza: Francisco on 4 April 1919 (age 10), and Jacinta on 20 February 1920 (age nine). St John Paul II had beatified them in 2000.

I have never entertained any doubt at all of their sanctity. The apparitions at Fatima have so many marks of authenticity about them: not least the brevity and penetrating truth of Our Lady’s comments. In addition, there is the uncanny fittingness of Our Lady’s statements, so perfectly apt to the international situation then (the rise of Communism) and now (the rise of Islam in formerly all-Christian nations). The actions and words of Fatima, even the fact of it being “Fatima” (the youngest daughter of Muhammad by Khadija, and then the wife of Ali) are precisely applicable, thus demonstrating an understanding of the patterns which human history would take. Such knowledge could not be merely human.

But one feature which had always struck me was the sad fate of Francisco and his sister: there always seemed to me to be a great lesson in this. I have always seen in this the hand of God, feeling that, as with Bernadette Soubirous, special privileges bring with them special calls to sacrifice one’s suffering (and hence, great suffering). This is also seen in the life of Our Lady: how she to whom the greatest graces were granted suffered the greatest sorrows. Then, too, the lives of the apostles bear the same theme: all being martyred, with the possible exception of St John (although there are early traditions that he, too, was martyred).

A modern example of this comes from Fr Gereon Goldmann’s The Shadow of his Wings, p.234. Describing the signal success of his mission in a prisoner of war camp at the end of WWII, he writes:

In late autumn of 1945, a chaplain from another camp, who had once been chaplain at Ksar-es-Souk, came to pay us a visit. He had tried in vain to build up a religious group here, finally being driven away by insult and mockery.  He could hardly believe it when he saw so many receiving Communion every morning. He rejoiced sincerely with me, but as he was leaving he said: “Pray that the cross that surely will come to you will bravely be carried.”

I answered that we already had many crosses to bear in this camp, but still he thought that I as a priest would have to carry a special cross, for so many blessings and graces would certainly have to be paid for by a special sacrifice.

And the sufferings unmistakably came, in a totally false and malicious accusation of having been the former commander of Dachau concentration camp. Not less than 27 men had made statements which incriminated him in fine detail. Fr Goldmann went through hell on earth  as a result, before being exonerated and released.

Again, that passage has always had a powerful effect on me, as encapsulating a great truth, a truth which was exemplified in the lives of Francisco and Jacinta. So, I too, was moved to read that Pope Francis had said: “We declare and define Blessed Francisco Marto and Blessed Jacinta Marto as saints.”

When I look at their pictures, I see innocence, simplicity and holiness: I have the sense that these children are already being taken away from the world, drawn on by something supernal which has been made visible to their eyes.

Sometimes in life, the suffering comes first, and then the graces. It is not up to us when and how the graces come (although we can always increase our pointless sufferings). But it is up to us how we receive both the sufferings and the graces.

There is one other point to mention: when I first heard of it, I had difficulty with the idea of the devotion to the Immaculate Heart of Mary. In part, it was never presented to us when we were young. In part, we were expected to revere the Sacred Heart, but it was never explained to us, and it was presented in a rather graphic and unsubtle manner. When I saw pictures of the heart of Mary, I assumed that it was a Marian version of the Sacred Heart which had been abandoned. I am not alone in this, and of the many hundreds of boys I went to school with, I doubt that more than a few, if even that, have any devotion to either heart. It was only much later that I learned that the IHM devotion was related to Fatima: that had never been taught to us, either.

Only recently, did I learn that on 12 April there had been a feast of “The Interior Life of the Virgin Mary”. That made a big difference to me. That I can understand. This also shows the importance of good art: those rebarbative pictures had repelled me. So, if we relate Fatima’s message to the interior life of Our Lady, we have something very different. That turns us towards our own interior life. It gives us a basis for understanding.