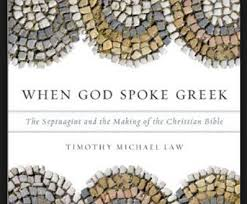 What is the history of the Bible, and how did the Church’s view of it, especially its view of the Old Testament change over its first four hundred years? Why was the Septuagint (the Greek Old Testament) so important to the Church, and why it is critical for us today? These questions are front and centre of When God Spoke Greek by Timothy Michael Law, which might be called a concise, even punchy account of the production and the first six hundred years of the Septuagint and why it matters.

It is a good, interesting book. Some of it is controversial, but none of it is unarguable (so far as I can see), and it brings a fresh perspective on the Bible. When I say “fresh”, I mean that its approach appears fresh today. Elements of it are quite ancient, for example, Law quotes great St Ephrem, writing of Scripture:

Who is capable of comprehending the extent of what is to be discovered in a single utterance of Yours? … Anyone who encounters Scripture should not suppose that the single one of its riches that he has found is the only one to exist; rather, he should realise that he himself is capable of discovering that one out of the many riches which exist in it … A thirsty person rejoices because he has drunk: he is not grieved because he proved incapable of drinking the fountain dry. (167-168)

(This goes to show how critical it is for us that the works of this remarkable saint all be edited, translated and made available in bilingual editions so that we may all benefit from his wisdom).

As you can see from the above quotation, one of the issues here is: is there only one correct reading of Scripture? And while we must acknowledge that there are endless wrong, misconceived or even mischievous interpretations of Scripture, there will often be layers of meaning, and multiple connections. For example, any interpretation which said Ss Matthew, Mark and Luke and Paul were not describing the institution of the Eucharist by the Lord will be wrong. And any interpretation which does not see transubstantiation as being the teaching of the Lord Himself will be wrong. But then, precisely because that mystery is the solid, stable and unalterable heart of the texts, we can discover new avenues of approach. So long as we are speaking of the one great mystery, we can discover new horizons. As we grow, spirituality, our understanding will grow. But if that essential understanding is lost, then we are tossed at sea, and we have no sound basis for our learning, let alone for conversation. Our “new horizons” will be fantasies, products of our imagination and wishful thinking, as the history of Protestantism shows beyond a doubt.

What St Ephrem is speaking of in the quote above is how the riches of Scripture are so vast as to teach and illuminate many people many different truths which will not necessarily be inconsistent with one another. His view is perfectly consistent with the idea that there is one true text of the Bible and no other (although he may have believed, rather, that there is a true tradition of scripture).

But Law goes further than that: his thesis is that the Septuagint, even in the form(s) we have it in today, gives evidence of a time when Jews and Christians were content to read slightly differing versions of Scripture. They did not have the idea that there could only be one correct text. Rather, they felt that if there were some variations, it was possible that both of them could be true and inspired. That is, while we tend to think of different translations of one authentic text, in the ancient world they may have felt more like they had versions of the Word of God.

At p.144, Law gives as an example, Origen’s approach. This ancient scholar would compare different translations and would often find different readings, which he could, on occasions, take as being complementary rather than contradictory. Yet, as Law acknowledges, Origen did sometimes contrast them with a view to finding the one true reading. I think that the main weakness of Law’s argument at this point is that he does not try to establish the reading principle in full: how much variety could be tolerated before it was felt that one of the texts had to be wrong? And was it a difference in words (the way something was put) or in content (what was said), or both, which made them reject a reading?

I think that the point is that there was a tradition of scripture, meaning by “tradition” a passing on from one generation to another of what was considered to be true, important, and – eventually – hallowed by usage, so that the tradition links us to the revelation.

That revelation does not have to be once for all – as Law shows quite well, some believed that even if God had revealed the Hebrew scriptures before the Greek translations were made, it does not mean that that translation was not inspired. After all, every translation involves an irreducible element of interpretation. That element of interpretation was, some affirmed, inspired, so that the Septuagint had as good a claim to be accepted as the Hebrew text did.

Also importantly, as Sidney Jellicoe pointed out in The Septuagint and Modern Study (which is now 40 years old, showing that sometimes it is not wise to place words like “modern” in the title), not all of the Septuagint is in fact a translation: some of the books such as the Wisdom of Solomon were in fact composed in Greek. This is significant, because, as we shall see in future articles, some developments in revelation were included in Wisdom, and there are also developments in the Septuagint.

In other words, as man’s history approached the age of the Messiah, more was revealed, and some of it was revealed through the inspired interpretation of the Septuagint.