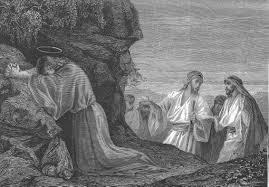 The roots of the “Jesus Prayer” go right back, of course, to Our Lord Himself. The usual words, “Lord Jesus Christ, Son of God, have mercy on me a sinner,” go right back to Luke 18:13 and the story of the Pharisee and the Publican. The prayer we know today has several forms, and in some of these, the direct link with the Lord is tenuous at best. But with some of them, it is much, much stronger.

The Desert Fathers believed that while there were times when one should pray and do nothing but pray, there were also times to do other things, but that did not mean that one could not pray at all at those times. The Jesus Prayer, when done properly, helps one to hear the wordless echo of the Prayer, and so to feel something at least of the presence of God, even when engaged in other activities

A Russian version was popularised through the little classic The Way of a Pilgrim, which appeared in the Russian language on Mount Athos, and was taken from there to Russia, where it was printed in 1884, and had a huge success. The book commences with the anonymous pilgrim (probably a partly fictional and part real character) who heard St Paul’s exhortation to: “Pray without ceasing” (1 Thessalonians 5:17). Eventually he finds a monk who takes him to a monastery where he learns that:

“The continuous Prayer of Jesus is a constant uninterrupted calling upon the divine Name of Jesus with the lips, in the spirit, in the heart; while forming a mental picture of His constant presence, and imploring His grace, during every occupation, at all times, in all places, even during sleep. The appeal is couched in these terms, “Lord Jesus Christ, have mercy on me.”

The monk then read to him from the Philokalia. At first, the practice went well, but then the pilgrim started to find his mind clouding, and started to suffer distress. When he returned to the monk, he was read some more, and was given a rosary (although the Latin rosary is used differently from the Greek and Russian Orthodox rosaries). He was told to use the rosary and to say, three thousand times a day: “Lord Jesus Christ, have mercy on me.” The count was soon increased, but what is important is that the beads were found necessary to keep his mind steady.

The rosary is absolutely basic: it keeps you linked to the body (and stops you getting distressed), and it is a support for the attention. It also helps wonderfully with knowing how many prayers you have said, because the Jesus Prayer yields the best results when a specific number of prayers is chosen in advance, e.g. 1,000 a day, with 500 before 12 noon and 500 after.

Note, too, that when the pilgrim is taught, he is not told just to say some words. Rather, he is taught that it includes:

What is left out here but is in the Philokalia, relates to a fuller form which I call “The Prayer of the Heart.” This adds (6) the need to observe the breath while praying: not to interfere just to watch it. And do not forget (7) to decide how many prayers to say, and (8) to use the rosary, at least at the start. That makes eight basic elements all together. But there is a ninth to make it practical: (9) you need to have a spiritual director who can watch you, because little things get forgotten or other things sneak into the practice, and suddenly it has become something different. We need a guide to keep us on the right path, to watch for when our ego starts to join in, to see the things we do not and cannot see for ourselves.

And that is the basis of the Prayer of the Heart and of the Jesus Prayer.