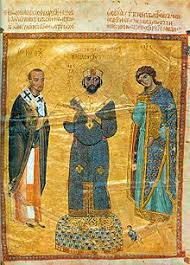 1.         a constant and uninterrupted calling upon the divine Name of Jesus with the lips (so that it is said out loud, at least sometimes),

Now let us take it further. I think that it is impossible to obtain a sense of how unique the Prayer of the Heart is, unless one realises that it is  itself only a shorter form of not just a prayer, but a practice of contemplation. Further, that contemplation is needed together with the Prayer of the Heart and the Jesus Prayer to obtain the best results.

For the record, Hesychasm seems to have begun on Mount Athos, and the Holy Mountain (actually a mountainous peninsula), although it had long been home to hermits, started to become what it did only with the foundation of the Great Lavra (a monastery complex with separate accommodation for the monks) in 963/4 by St Athanasius (c.925/30-c.1001).

Writing in the Cambridge History of Christianity, Krausmüller states: “… the so-called hesychastic method (comprised) a set of psychophysical techniques whose raison d’être (reason for existence) it was to rid the mind of all distracting thoughts and to induce visions of God as light.”

Attention is a sign of sincere repentance. Attention is the appeal of the soul to itself, hatred of the world and ascent towards God. … Attention is the beginning of contemplation, or rather its necessary condition; for, through attention, God comes close and reveals himself to the mind. … Attention means cutting off thoughts, it is the abode of the remembrance of God … Therefore attention is the origin of faith, hope and love …

This is significant because attention was central to Gurdjieff’s Aiëssirittoorassnian-contemplation, and he placed importance on the concepts of faith, hope and love, which he considered to be impulses within each person. Nicephorus advises the addressee to seek a teacher, but if no teacher can be found, to call on God and to practise as follows:

You know that our breathing is the inhaling and exhaling of air. The organ which serves for this is the lungs which lie round the heart, so that the air passing through them thereby envelops the heart. Thus breathing is a natural way to the heart. And so, having collected your mind within you, lead it into the channel of breathing through which air reaches the heart and, together with this inhaled air, force your mind to descend into the heart and to remain there. … when your mind becomes firmly established in the heart, it must not remain there silent and idle, but it should constantly repeat the prayer: “Lord, Jesus Christ, Son of God, have mercy upon me!” and never cease.

However, states Nicephorus, for those who find this too difficult:

You know that in every man inner talking is in the breast … Thus, having banished very thought from this inner talking (for you can do this if you want to), give it the following short prayer: “Lord, Jesus Christ, Son of God, have mercy upon me!” – and force it, instead of all other thought, to have only this one constant cry within. If you continue to do this constantly, with your whole attention, then in time this will open for you the way to the heart which I have described.

Obviously, then, the second version (the Jesus Prayer) is only a summary, but what is not so obvious is that the first version (the Prayer of the Heart) is too. The written tradition was only ever thought of as an adjunct to the personal tradition. Sometimes people speak of the “oral tradition,” but that puts the emphasis in the wrong place: it is not “oral” as if talking the words was needed rather than writing them. It was personal because the teacher brings a personal influence. The teacher localises in himself the history of his own efforts. In the presence of the teacher one is in the presence of the traces of work. Even if the mind of the teacher occasionally fails, or his emotions are not perfectly stable, there is – if he is a real teacher – a reservoir of experience.

The teacher is needed to judge what to say or what to give the pupil to read. If a pupil has problems with either form of Prayer, the teacher is needed to ask questions, skilfully probing, through his experience knowing what to ask about. It happens, quite often, that the teacher is surprised. But he has the fund of knowledge necessary to deal with the surprises, maybe not perfectly, but certainly better than the student can.