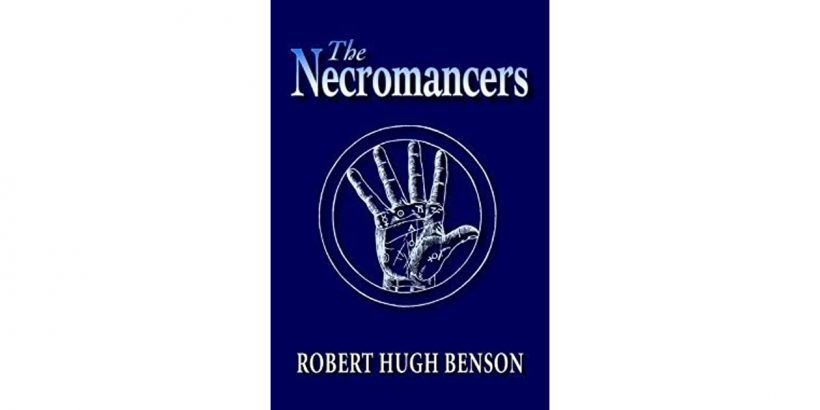 Benson developed a rather simple but, I suggest, accurate view of the relationship between will and formatory thought (to use Gurdjieff’s phrase for the lower level of mind, the one usually engaged in talking, whether to others or to oneself): briefly, it was that will resides at a higher level of the person than the registering and associating formatory apparatus. In that, surely, he was correct. In The Necromancers, one of the main characters is Lady Laura Bethell, spinster, who is quite wittily described as keeping a house in London where “the modern prophets were to be with – severe-looking women in shapeless dresses, little men and big, with long hair and cloaks …” (Chapter 3, 48) However, she is not unintelligent, and oddly perhaps, her name means “House of God,” in Hebrew, as I am sure Benson would have known. So there is a certain ambiguity about her, and that continues, I suggest, when Benson describes her “evening meditation.” She has a special room “fitted up … with all the broad suggestiveness that marks the Higher Thought; decked with ornaments emblematical of at least three religions, and provided with a faldstool and an exceedingly easy chair. It was here that she was accustomed to spend an hour before dinner, with closed eyes, emancipating herself from the fetters of sense; and rising to a due appreciation of the Nothingness that was All, from which All came and to which it retired.” (Chapter 3, 51)

This superficially sounds ridiculous; but as becomes evident, her disciplines and pursuits are not to be despised: there is a reality about them, even if that reality is not what she has imagined. Later we find this picture of Lady Laura during a long séance, characterised by the concentration of attention, and shutting out “all that was presented by the senses” (Chapter 13.2, p.234):

“When the silence became fixed, Lady Laura for the first time perceived the rage of wind and rain outside. The very intensity of the interior stillness and the rapture of attention emphasised to an extraordinary degree the windy roar without. Yet the silence seemed to her now, as always, to have a peculiar faculty of detaching the psychical from the physical atmosphere. … These were in one world, she in another. …

An endless procession of thoughts defiled before her as she sat, yet these too were somewhat remote – far up, so to speak on the superficies of consciousness: they did not approach that realm of the will poised now and attentive on another range of existence.” (pp.234-235)

Something supernatural begins to manifest itself: “It was impossible for her to express this even to herself; yet the perception was clear – as clear as the presentment of the senses.” (p.238)

Then an infernal phantom in the shape of the wraith of Amy Nugent appeared, Baxter reached out for it, but both he and the medium collapsed. The natural world had been unable to bear the eruption of another dimension. Compare this with the experience of Margaret, the heroine of the novel, when she is confronted by the demonic:

“Once more she began deliberately to attempt to gather her forces; but the will, it appeared, had lost its nervous grasp of the faculties. It had no longer that quick grip and command with which she had begun. Passivity rather than activity seemed her strength … Then suddenly, and as it appeared, inevitably, without movement or sound, she began internally to pray, closing her eyes, careless, and indeed unfearing. It seemed her one hope. And behind the steady movement of her will – sufficient at least to elicit acts of petition – her intellect observed a thousand images and thoughts. … She relinquished all plans, all intentions and hopes: she leaned simply upon the supernatural, like a tired child, and looked at pictures. (Chapter 17.3, pp.299-300)

Lady Laura, wealthy and enviable, is only a sort of cork bobbing about on a sea of unconscious events, processes, and currents. Margaret, the obscure orphan, is able to bring not only control but also virtue to her share of the ocean of mind, because she relies on the supernatural. What is natural and in the world receives its order – such order as it possesses – from the supernatural; and if one does not accept the divine order one may well fall into the infernal chaos which is always watching for a chance to manifest and to destroy.

This ties in with the aching puzzle with which the novel opens. Amy Nugent has died, and Laurie wants to know that somewhere, somehow, she lives with some sort of existence. The tie-in might be expressed like this: is this world an unmeaning random congeries of facts and experiences, or is there an order which is larger than this world, which explains and also accommodates human life, so that it passes from here to there? And if so, what is that “there”? Hence, at the beginning of the story, Laurie contemplates the glorious English countryside:

“He wondered now and again as to the fate of the spirit that had informed the body and made it what it was; but his imagination refused to work. After all, he asked himself, what were all the teachings of theology but words gabbled to break the appalling silence? Heaven … Purgatory … Hell. What was known of all these things? The very soul itself – what was that? What was the inconceivable environment, after all, for so inconceivable a thing?… He did not need these things … these labels and signposts to a doubtful, unimaginable land. He needed Amy herself or … some hint or sound or glimpse to show him that … there was somewhere something that was herself, some definite personal being of a continuous consciousness with that which he had known …” (Chapter 1.1, p.20)

The coherence of the novel at this deep level is quite impressive. We can paraphrase the thread which holds the novel together like this: is there any principle of order which can sustain continuity on any level which matters to us as individuals – whether in our minds or in our souls? Is there any unity in us psychologically, or do we just observe the machinery of a certain consciousness proceeding in its own dark way? And the same for the soul: is there a soul which can survive death, or is it just an illusion projected onto an ever-changing, ever-dispersing reality?