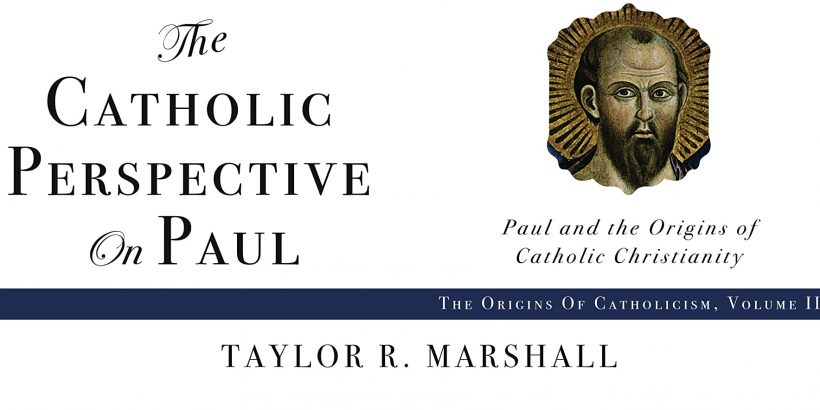 Taylor Marshall’s The Catholic Perspective on Paul is a rare bird indeed: it is a solid, systematic treatment of the Apostle St Paul and his letters. It is written simply and directly, and his interpretations are, by and large, sound. Further, it forms an integrated whole. The big insight is this: St Paul “presents salvation in terms of participation.” (27) The entirety of the volume works out this idea in twelve chapters, covering long other topics, Justification, Faith and Works; Baptism; Grace; Purgatory and Prayer for the Dead; the Eucharist, the Priesthood, Matrimony, and Sexuality. Before I launch into the book, I will back up a little.

This is volume II in a three-part series titled The Origins of Catholicism, the first of which deals with Our Lord, and the third on the Church and why it is and should be based in Rome. Published in 2010 by the St John Press, it runs to 218 pages plus three appendices, a bibliography, and an index. Unfortunately, I am not sure it is still in print.

Now, as stated, the main thesis is that St Paul’s theology turns around this one axis: that we can participate in the life of Christ. As he stated in Romans 12:5 “So we, though many, are one body in Christ, and individually members one of another”. (27) Marshall states that: “… Paul discusses the believer’s participation in Christ more than justification, faith, works, law, or predestination. Union with Christ is the ubiquitous theme of Paul’s theology.” (27) This insight is the key which opens the door to each of the themes, whether sacramental or theological: he returns to it at  pp.123-126 in dealing with the Eucharistic doctrine of 1 Corinthians 10:18-21. I was pleasantly surprised to find that Marshall persuasively relates this to the Church’s teaching on saints and miracles, for “If one member is honoured, all rejoice together. Now you are the body of Christ and individually members of it.” (1 Corinthians 12:26-27) (194)

This splendid insight inspired this passage: “If Saint Paul’s view of Christianity is that of participation in the life of Christ, then we would expect that there must be a way for this participation to be realised in the daily life of the Christian. For this reason, the heart of Paul’s doctrine of participation is the Real Presence of Christ in the Eucharist.” Thus, as he correctly remarks, the Eucharist is known as communion from a Latin word which includes the meaning of “participation.” (125)

Likewise, the clue to understanding the NT teaching on priesthood is participation the priesthood of Our Lord: “… the personal sacrifice of the Christian in worship is united to the one sacrifice of Christ through participation of the lesser within the greater.” (138). If Taylor understood the Semitic concept of typology to this, he would add a dimension of wisdom to his already impressive knowledge. He comes very close to it, when he writes: “… the Church holds up the crucified Christ as the archetype for Christian living.” (207) This is true, but it is also true that the archetypes for all human existence are found in the life of the Lord and in his sacraments: we are made in the image and likeness of God, but only imperfectly. This would offer another avenue interpretation of St Paul’s statement that in his own flesh he completes what is lacking in Christ’s afflictions (Colossians 1:24) (211). The point, typologically, is that we are realising in our bodies the archetypal pattern which is the Lord. Yet, Marshall comes to the same point, using philosophical theology, when he says: “… we can unite our sufferings to Christ. This is the element that is “lacking”.” (211) Hence, as I said, the book is a coherent integrated whole.

The same recourse to thought is fundamentally typological occurs when Marshall declares: “I might even go so far as to say that the Catholic Church in America has experienced a shortage of vocations to the priesthood because young men are unwilling to pursue spiritual fatherhood on account of the absence of real fatherhood in their own homes.” (164) This is also related, I suggest, to a lack of appreciation of the fatherhood of God. The universe is hierarchic and inter-related (e.g. the three orders of the priesthood, the historical development of which he understands much better than more eminent academics: 146-147) . Hence, by taking Christ as his archetypes and himself as the archetype, a man may better understand why celibacy is so good a way of serving Him as a priest. (152)

Marshall also describes a rather prevalent error: what he calls “zero-sum theology.” This is a game where if one side gains something, then the other side must lose the same amount, so that the total change is zero. If I gain ten, then you lose ten. In theology, this means, as Marshall says that: “Christ either gets all pieces or loses the remaining pieces to Mary, saints, sacraments, priests, popes, etc.” (28) This is quite a deep insight, although Marshall presents it quite simply and without any fanfare.

There are some rather brilliant remarks in this book, e.g. “In Mary and Joseph we find the nexus of the Old Covenant and the New Covenant. We also find the nexus of marriage and celibacy.” (160) Even more impressive is the treatment of mortal and venial sins (92-93). I also liked his interpretation of the Eucharist as the (more prefect and higher) NT equivalent of the OT today offering of wheat flour and wine, and how he relates to the the priesthood of Melchizedek (120-121). Also, in Ephesians 3:8-10 St Paul said the wisdom of God would be made known through the Church, as opposed to through the Bible. (40-41) He shows how “the New Covenant ministers are priests because they serve at the altar of God,” and “the office of apostle is identified with that of a priest …” (141)

I have not exhausted the value of this book. It is highly recommended for anyone seeking to understand St Paul. Bluntly, Marshall has penetrated to the depths St Paul more directly and accurately than many far more highly qualified experts in St Paul and the NT; and all because he followed the traditional teaching of the Church Fathers.