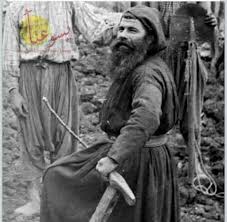 Blessed Estphan was born as Youssef Nehme in Lehfed, on 8 March 1889 a village in the Byblos area of Lebanon. The youngest boy in a family of six children, he lost his father in 1903, and was orphaned only about two years later when his mother died. In 1905, he entered the Lebanese Maronite Order monastery of Saints Cyprian and Justina, Kfifan. When he became a novice about a week later, he took the name Estphan. When Estphan’s elder brother learned where he was, he travelled to the monastery, asking his brother to return. However, he replied: “I have entered this monastery and I will die here.” Although he spent periods in different monasteries, he did in fact die there.

On 23 August 1907, after the two year novitiate, he pronounced his vows of obedience, chastity and poverty, and became a religious members of the Lebanese Maronite Order. He never became a priest, but always remained a “lay-brother.” He was put to work in the fields at the monasteries of Our Lady of Mayfouq, Saint Challita of Qattarah, Our Lady of Perpetual Succour in Byblos, and possibly also at Saint Anthony of Haboub. His died in the summer of 1938, after he had been called to the monastery at Mayfouq to settle a dispute between the farmers and the monastery over certain land. When Estphan had been there earlier, the stone boundary posts were visible, but they had become covered with time. Estphan remembered where they were, and was asked to go to the fields, and uncover them. He did so, but the work was hard, and on his return home, he fell ill with a fever. He died, at age 49, of a cerebral haemorrhage, and was buried in the monastery vaults.

In 1950, his corpse was found to be supple. When the vaults were re-opened on 10 March 1951, someone noticed that his corpse and the clothes were still intact. The news spread and attracted the curiosity of the villagers, so the vaults were closed up. On 29 September 1962, the body was inspected by a doctor, who found the corpse intact and almost entirely without decomposition: limbs, muscles and the skin of the belly were all still supple, and the hair of his head and beard were intact.

In what did Blessed Estphan’s spirituality consist? It is said that from his childhood, he would often say: “God is watching me.” That is, he lived with a constant sense of the presence of God. This is also shown by another saying attributed to him: “Monastic life is a total union with God and with the Virgin Mary.”

He was pious, and was known to be generous,  feeding the poor during times of famine. He was a willing worker, and also a good one, being competent in the fields, at carpentry and in the winery.

Like so many of the Maronite saints, all he did was his duty in an average life, but he did it to the full: loving God first, and then his neighbour like himself, for the sake of God. There were no famous speeches, no celebrated achievements, just holiness in his station in life.

There is no need to go into details about the miracles attributed to his intercession, although one of them relates to an Australian boy. Another involved his niece, a nun. He was beatified on 27 June 2010.

This was summarised from the treatment in my book An Introduction to the Maronite Faith, available from the book stalls at OLOL, Harris Park and at St Rafqa, Austral, and by the internet from Connor Court, the publisher: https://www.connorcourtpublishing.com.au/An-Introduction-to-the-Maronite-Faith_p_68.html