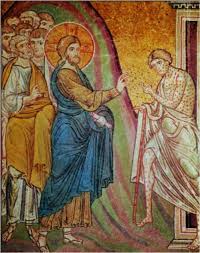 Introit   Have regard, O Lord, to Thy covenant, and forsake not to the end the souls of Thy poor: arise, O Lord, and judge Thy cause, and forget not the voices of them that seek Thee. O God, why hast Thou cast us off unto the end: why is Thy wrath enkindled against the sheep of Thy pasture? Glory be …

Collect O Almighty everlasting God, give to us increase of Faith, Hope and Charity: that we may deserve to obtain what Thou dost promise, and make us love what Thou dost command. Through our Lord Jesus Christ, …

Epistle (Galatians 3:16-22) Brethren: To Abraham were the promises made, and to his seed. He says not: “and to his seeds”, as of many; but as of one: “And to thy seed”, which is Christ. Now this I say, that the testament which was conﬁrmed by God, the law which was made after four hundred and thirty years, does not disannul,  to make the promise of no effect; for if the inheritance be of the law, it is no more of promise. But God gave it to Abraham by promise. Why then was the law? It was set because of transgressions until the seed should come, to whom He made the promise, being ordained by angels in the hand of a mediator. Now a mediator is not of one, but God is one. Was the law then against the promises of God? God forbid. For if there had been a law given, which could give life, verily justice should have been by the law. But the Scripture hath concluded all under sin, that the promise by the faith of Jesus Christ might be given to them that believe.

Gradual   Have regard, O Lord, to Thy covenant, and forsake not to the end the souls of Thy poor. Arise, O Lord, and judge Thy cause: remember the reproach of Thy servants. Alleluia, alleluia. (Ps. 89:1.) Lord, Thou hast been our refuge, from generation to generation. Alleluia

Gospel (Luke 17:11-19) At that time, as Jesus was going to Jerusalem, He passed through the midst of Samaria and Galilee: and as He entered into a certain town, there met Him ten men that were lepers, who stood afar off, and lifted up their voice, saying: “Jesus, Master, have mercy on us”. Whom when He saw, He said: “Go, show yourselves to the priests”. And it came to pass, that, as they went, they were made clean. And one of them, when he saw that he was made clean, went back, with a loud voice glorifying God: and he fell on his face before His feet,  giving thanks: and this was a Samaritan. And Jesus answering said: “Were not ten made clean? And where are the nine? There is no one found to return and give glory to God, but this stranger”. And He said to him: “Arise, go thy way; for thy faith hath made thee whole.”

Offertory   In Thee, O Lord, have I hoped: I said, Thou art my God, my times are in Thy hands.

Secret  Look graciously, O Lord, upon Thy people: graciously look upon our gifts: and, appeased by this offering, grant us pardon and give us what we ask. Through our Lord …

Communion (Wisdom 16:20) You have given us, O Lord, bread from heaven, having in it all that is delicious, and the sweetness of every taste

Postcommunion We who have received the heavenly Sacraments beseech Thee, O Lord, that we may steadily advance towards eternal redemption. Through our Lord Jesus Christ …

Fundamentals of the Faith: Part VIII

Fr Ludwig Ott, in his Fundamentals of Catholic Dogma, states: “Theology … understands by (the word Grace) “a gift from God to man, not due from God, and not merited by man. In this wider sense one can also speak of a natural grace (for example, the Creation and gifts of the natural order, such as bodily health and mental soundness).” (p.220) This tells us that we can think of “grace” in several mutually informing ways. We receive it as a divine gift, it is given to all people, and also to us as individuals. Even those who have not been baptised as Christians may yet receive these natural graces from God: their own personal existence, talents and capacities, the beauty of the world, and the goodness of life. We do not create ourselves. God creates us. We often forget this, and that we owe absolutely everything to God. This also means that the Creator has certain rights. Too often, today, we speak of the rights of man but forget our duties to God.

Omitting the Latin, Fr Ott speaks of the causes of grace this way: “(The) Principal Efficient Cause of grace is the Triune God; (the) Efficient Instrumental Cause is Christ’s Humanity and the sacraments; (the) Meritorious Cause of the grace conferred on fallen mankind is the God-Man Jesus Christ, by reason of the Redemption; the Primary Final Cause is the glorification of God; (and) the Secondary Final Cause is the eternal salvation of man.” (p.220) That is, the grace given to us comes from the Holy Trinity – we dealt with this last week. It comes to us through the sacraments and merits of the Lord, and His work was performed and the sacraments instituted for our Redemption, that God might be glorified and we humans be saved. All of these concepts are necessary to understand anything at all about grace. The purpose of grace is to bring us to God, since as we were after the Fall, we were lost to Him.

Fr Ott introduces the concept of two kinds of grace: the created and the uncreated. The Uncreated Grace is God Himself. This has several aspects: His love which prepared the gifts of grace; the grace of His Incarnation in the Humanity of Christ; the grace of his indwelling in the souls of the justified, and His presenting Himself to the blessed (that is, those in heaven) in the Beatific Vision. The created graces are those supernatural gifts and operations which are distinct from God. These include the graces given to the angels and to Adam and Eve. In the Garden of Eden, humanity was “not worthy” of grace. But since the Fall, humanity has been unworthy. That is why the work of Our Lord Jesus Christ is so important: it has raised those who receive His grace to the “supernatural order of being and activity” (221). Further, “… the Grace of Christ has the task of curing the wounds inflicted by sin.”

I think this is significant because it shows us that the universe as created was a sort of stage of the love and goodness of God. We are born into this framework, and we suffer only because of sin. This shows how important it is to struggle with sin, and that this struggle even has a cosmic dimension. Hence in Romans 8:19-22, St Paul teaches:

For the earnest expectation of the creation eagerly waits for the revealing of the sons of God. For the creation was subjected to futility, not willingly, but because of Him who subjected it in hope; because the creation itself also will be delivered from the bondage of corruption into the glorious liberty of the children of God. For we know that the whole creation groans and labours with birth pangs together until now.