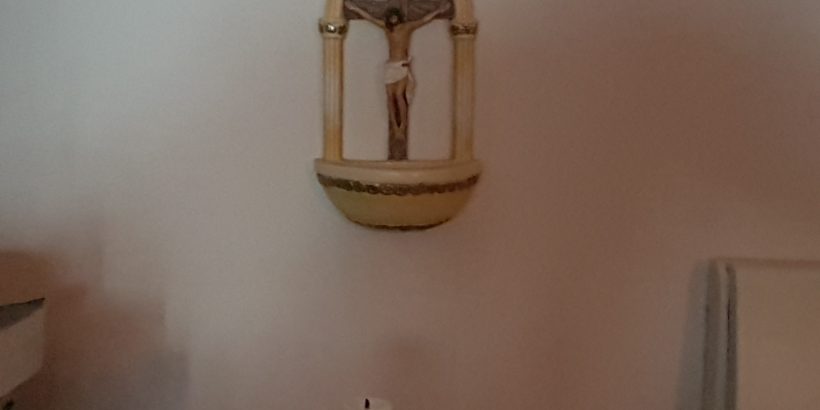 Introit   Give peace, O Lord, to them that patiently wait for Thee, that Thy prophets may be found faithful: hear the prayers of Thy servant, and of Thy people Israel. Psalm. I rejoiced at the things that were said to me: we shall go into the house of the Lord. ℣. Glory be to the Father, and to the Son, and to the Holy Ghost. As it was in the beginning, is now, and ever shall be, world without end. Amen. —

Collect Let the exercise of Thy compassion, we beseech Thee, O Lord, direct our hearts: for without Thee we are not able to please Thee. Through our Lord Jesus Christ, Thy Son …

Epistle (1 Corinthians 1:4-8) Brethren: I give thanks to my God always for you, for the grace of God that is given you in Jesus Christ, that in all things you are made rich in Him in all utterance and in all knowledge, as the testimony of Christ was conﬁrmed in you; so that nothing is wanting to you in any grace, waiting for the manifestation of our Lord Jesus Christ. Who  also  will  conﬁrm  you  unto  the  end without crime, in the day of the coming of our Lord Jesus Christ.

Gradual   I rejoiced at the things that were said to me: We shall go into the house of our Lord. Let peace be in thy strength, and abundance in Thy towers. Alleluia, alleluia. (Ps. 101:16.) The Gentiles shall fear Thy Name, O Lord: and all the kings of the earth Thy glory. Alleluia.

Gospel (Matthew 9:1-8) At that time, Jesus, entering into a boat, passed over the water and came into His own city. And behold they brought Him one sick of the palsy lying in a bed; and Jesus seeing their faith, said to the man sick of the palsy: Be of good heart, son, thy sins are forgiven thee. And behold some of the scribes said within themselves: He blasphemeth. And Jesus seeing their thoughts, said: Why do you think evil in your hearts? whether is easier to say: Thy sins are forgiven thee; or to say: Arise and walk? But that you may know that the Son of man hath power on earth to forgive sins (then said He to the man sick of the palsy): Arise, take up thy bed, and go into thy house. And he arose, and went into his house. And the multitude seeing it feared and gloriﬁed God who had given such power to men.

Offertory   Moses consecrated an altar to the Lord, offering upon it holocausts, and sacriﬁcing victims: he made an evening sacriﬁce to the Lord God for an odor of sweetness, in the sight of the children of Israel.

Secret  O God, who, by Thy venerable intercourse with us in this Sacriﬁce dost make us partakers of the one Supreme Godhead: grant, we beseech Thee, that as we know Thy truth, so we may follow it by worthy lives. Through our Lord …

Communion Bring up sacriﬁces, and come into His courts: adore ye the Lord in His holy court.

Postcommunion We have been renewed, O Lord, by Thy sacred Gift, and thank Thee, beseeching Thee in Thy mercy to make us worthy partakers in It. Through our Lord Jesus Christ …

Fundamentals of the Faith: Part XIII

In the Creed, we say that we believe in “One, Holy, Catholic, and Apostolic Church.” Why is the existence of a church of any importance in a creed? What does the love and worship of God have to do with human institutions? Well, of the Catholic Church we can say: first, it was founded by Our Lord Jesus Christ. This is the fundamental fact. The Church is not a society established by men, as some have wrongfully claimed, and therefore subject to all the faults of human institutions. It has faults all right – because of the people in it and our sins. But it still remains an ark of salvation and brings the sacraments to humanity. In that respect, its divine establishment is most valuable. The word “Church” has developed from the original Greek word ekklesia, meaning “called out from,” “selected from.” Just as the Church and its people are to be the yeast of the world, so too, they have been called out from it: you cannot save the world if you are lost in it.

The second matter to be clear about is that Christ founded the Catholic Church in order to continue His work of redemption for all time. Of these, the most important is the sacraments. When one considers what is involved in that, one sees that the continuation of the Christian family through marriage, and of the priesthood through sacerdotal ordination feature. So the sacraments contain, in essence, all that is needed for Christian life in this world. The Church will always have the tasks it has had since His time. Third, Our Lord gave His Church a hierarchical constitution. We know that the Pope is the head of this hierarchy here on earth, but not as an individual human being: rather, as the successor of St Peter.

Fourth, the powers bestowed on the Apostles have descended to the Bishops. “Cardinals” and “archbishops” are merely administrative posts, they are not separate orders. Fifth, Christ appointed the Apostle Peter to be the first of all the Apostles and to be the visible Head of the whole Catholic Church, by appointing him immediately and personally to the primacy of jurisdiction. Sixth, according to Christ’s ordinance, Peter is to have successors in his Primacy over the whole Catholic Church and for all time. The successors of Peter in the Primacy are the Bishops of Rome. The fact that sometimes these bishops were in Avignon is but an ancillary matter of no importance: they were will the bishops of Rome.

What can we say of the Pope? He possesses full and supreme power of jurisdiction over the whole Catholic Church, in matters of faith and morals, and in Church discipline and in the government of the Church. He is infallible when he speaks ex cathedra. This means that even if he states an opinion (e.g. “strawberry is a better flavour than chocolate”) this is not picked up by the teaching in infallibility. In the final decision on doctrines concerning faith and morals, the Catholic Church is infallible. The primary object of the Infallibility is the formally revealed truths of Christian Doctrine concerning faith and morals. The totality of the Bishops is infallible, when they, either assembled in general council or scattered over the earth propose a teaching of faith or morals as one to be held by all the faithful.

Bishops possess an ordinary power of government over their dioceses. This does not give them the right to behave tyrannically. It shows rather the extent of their responsibility – they must answer to the Lord for the discharge of their duties, for in a very real way, Christ is and always will be the Head of the Catholic Church.

The Church founded by Christ is unique and one, holy, catholic and apostolic. Membership of it is necessary for all men and women for salvation.