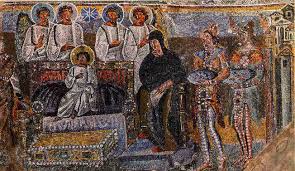 Last week we briefly looked at how the Syriac tradition values and dwells upon how the Nativity of the Lord fulfilled the prophecies recorded in the Old Testament. We meditated a little on the concept of prophecy, and we saw that it teaches us that God is patiently watching, as His divine plan unfolds. From one perspective, He is often silent, but never is He absent: rather, He has planned the broad contours of history, and made available to us salvation so that we can be united with Him. Time is measured and known – by God. This week we look at another aspect of how the Nativity teaches us about God’s presence in the world – the glory of God.

The Glory of God

On the night of the Nativity, some shepherds witnessed the gates of heaven opening: “The angel of the Lord appeared to them and the glory of the Lord shone around them, and they were struck with great fear.” (Luke 2:9) Then, this angel was joined by a multitude of others, and they praised God, saying: “Glory to God in the highest, and an earth peace to those on whom his favour rests.” (Luke 2:24)

This is not just poetry, this is a teaching: when there is glory to God in the heavens, then there can be peace on earth for those who can receive it. There must be a hierarchical order established under God for the lower sphere to share in the universal worship. Praise, glory, and peace, form a unity. Each element is essential: hence the Divine Sacrifice of the Mass continually refers to all three of these, and opens with the prayer: “Glory to God in the highest.” The order is from the summit down to the base: hence the Nativity of the Lord, His birth in Bethlehem, displays the divine arrangement. We are utterly dependent on grace from above.

At first, the shepherds were afraid. This is a good fear, a fear with a future, because it makes us feel our own existence very keenly and deeply. We never know we exist as deeply as we do when our existence is threatened. And the future which this fear holds out for us is in its humbling us, and showing us the way to obedience, and through obedience, to union with God (on our level, of course).

That the Son of God should become incarnate (take flesh) within the realm of nature, tells us that God is in relation to nature: there is a connection. He cares for humanity: we know that. But He did not refrain from acting in the flesh and in the world. Many early Christians could not accept this, and, considering the flesh to be evil, thought that Our Lord must really have been a pure spirit, and His body was but an illusion. By coming into this natural world, the world itself was revealed as the legitimate sphere of God’s activity. This explains how St Paul can say:

For I consider that the sufferings of this present time are not worthy to be compared with the glory which shall be revealed in us. For the earnest expectation of the creation eagerly waits for the revealing of the sons of God. For the creation was subjected to futility, not willingly, but because of Him who subjected it in hope; because the creation itself also will be delivered from the bondage of corruption into the glorious liberty of the children of God. For we know that the whole creation groans and labours with birth pangs together until now. Not only that, but we also who have the first fruits of the Spirit, even we ourselves groan within ourselves, eagerly waiting for the adoption, the redemption of our body. (Romans 8:18-23)

The redemption of the body and of the world are linked together, and these are linked to the concept of glory. “Glory” is not something which we think about very much, but it is important in the Syriac tradition. I suggest that it refers to seeing the power and goodness of God present in His creation, with the eyes of the spirit. To see the glory of God, is to rise to a higher level of being, if only for a moment. Hence, in his sixth Hymn on the Nativity, St Ephrem declares:

All of creation became mouths

and cried out above Him: the Magi cried out

with their offerings; the barren cried out

with their offspring; the star of light

cried out in the air, “Behold the King’s Son!”

The sky was opened, the water sparkled;

the Dove hovered over, the voice of the Father,

“This is My Beloved;” the Watchers (the angels) proclaimed Him,

This glory of the Nativity was shared in by Our Lady. St Ephrem has her say that when the Lord “put on” her “garment” (her body), she put on His glory (H.N. 16.11). This glory was not visible then, but its power would have been felt: and I sometimes wonder if power is not an integral part of the Semitic notion which we translate as “glory.” Elsewhere, St Ephrem says that Our Lady’s virginity was a “garment of glory” which she was clothed in: a lovely way of describing the virtues of intentional celibacy chosen for the kingdom of God: typologically, it unites us with Christ, and with Adam and Eve (who lost their robes of glory when they sinned.) Our robes of glory are restored to us in baptism.

In the Creed at each Mass, we say: “He will come again in glory to judge the living and the dead.” Do we ever ask why the writers of the Creed thought it necessary to add the words “in glory”? The glory of God is what has been hidden being revealed, and when it is uncovered, it shows in light: not just any light, but in the uncreated light which is a sign of the presence of God. This is shown, I suggest, in the Transfiguration.

This, then, is another aspect of the mystery of the Nativity: that the Lord hid His glory when He was born on this great day, but the very garment beneath which He concealed that glory, has been “a robe of glory to human beings.” (H.N. 5.4)