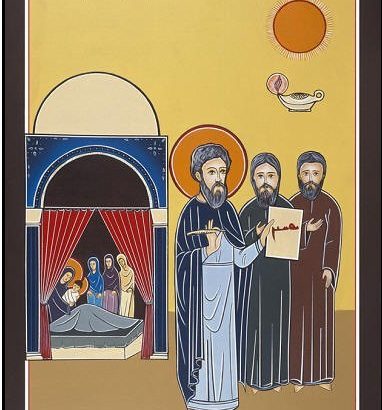 Luke 1:57-66  Now Elizabeth’s full time came for her to be delivered, and she brought forth a son. When her neighbours and relatives heard how the Lord had shown great mercy to her, they rejoiced with her. So it was, on the eighth day, that they came to circumcise the child; and they would have called him by the name of his father, Zacharias. His mother answered and said, “No; he shall be called John.” But they said to her, “There is no one among your relatives who is called by this name.”

So they made signs to his father—what he would have him called. And he asked for a writing tablet, and wrote, saying, “His name is John.” So they all marvelled. Immediately his mouth was opened and his tongue loosed, and he spoke, praising God. Then fear came on all who dwelt around them; and all these sayings were discussed throughout all the hill country of Judea. And all those who heard them kept them in their hearts, saying, “What kind of child will this be?” And the hand of the Lord was with him.

Fr Badwi writes of the icon: “This icon unites two events – Elizabeth in her home carrying her new-born son, surrounded by midwives and neighbours; and Zechariah writing the name “John” in front of two of his friends. In the miniatures of the British Library … and the Vaticanus Syriacus … the second event is only represented. We have added the lighted lamp in front of the sun, the symbol of the Baptist in front of Christ, according to the Syriac liturgical texts.”

The name is written in Syriac in this icon: “Yohanon.” Of course, Christ is the sun, and the Baptist is the lamp.

Once more, a dome is present, this time over the house where St John the Baptist is born. This could be because the Temple was in Jerusalem, which is in the hill country where St John was born (after all, his father was a priest who served in the Temple). But I think there may be more: the Temple is a model of the Church of God. Every house where God is worshipped shares in the holiness of the Temple and of the Church. Hence, the dome was present over both the houses of Our Lady and her cousin in the icon for the Visitation (the Journeying of Mary). Obviously, the Temple cannot be in two places at once, but the reflections (or in theological language, the antetypes) of the Temple can be in many places simultaneously. In this way, the Church is one in heaven, and it is reflected in many “copies” on the earth. Elizabeth’s house is shown in the same manner, even with the same colours, as Our Lady’s in the icon of the Annunciation. They seem to be the one house: and they are, in their holiness.

Finally, from the icon, the curtains of the house are pulled back, for the birth of the Baptist was the topic of conversation in that area. St John is wrapped in swaddling bands, as the Lord would be. Also, Zechariah is walking forward towards the two men (two men were needed as witnesses in the Hebrew tradition), which is shown by the lifting of his right foot: he is intervening to ensure that the child is named “Yohanan,” or “God is gracious.”

Interpretation This is the fourth Sunday of Announcement. What is being announced today? It is partly the birth of St John the Baptist, partly confirming that the woman who had been thought barren has been found fertile (hence the sprouting from the withered tree trunk which we saw last week). But above all, the announcement is that the hand of God is operating in our world. This is shown my multiple factors: the miraculous birth itself, Elizabeth’s choice of a name which no one had expected, the confirmation of her choice by Zechariah, and the curing of his inability to speak, and that both Elizabeth and Zechariah attributed the miracle to God through their naming of the child.

Fr Badwi was quite justified in deciding to show not only the events with Zechariah, but also the birth of the Baptist. The two events go together, and give each other meaning. Perhaps the old icons only showed one event because the icons might otherwise have been too full, with too many details. When we considers it from that perspective, we see how capable and judicious Fr Badwi’s icon is. It manages to show the two events with great clarity.

How do we interpret all this? When we consider all the miraculous events together, we see that God is truly the Lord of History. He uses unexpected people, and unexpected events, to bring His Divine Will to come to pass. Like the people in today’s Gospel, we think we have a pretty shrewd idea of what is happening and what it likely to occur. But are we justified in this? These people thought they understood Elizabeth and her condition: they thought that her barrenness was because she did not enjoy the favour of God. Their beliefs were completely overturned: it was precisely because she was a good woman and was to receive the favour of God that she was kept barren until such time as her giving birth would show forth the glory and power of God.

So too, we should be humble when we look at the world around us, or contemplate the direction our lives are heading. We might think that God has forgotten us, that He is not listening to our prayers. But if we did think that, we would be wrong. First of all, if one prays to Him, God will always grant us the grace to deal with whatever the issues before us may be. But secondly, and shown very clearly by this Gospel: history and our lives are not in our hands, they are in the hands of God. He knows better than us what we need and when we need it. He knows better than us His own Divine Plan for the Salvation of His People. Rest assured that He will bring His salvation to come to pass – and the way He does it will surpass the workings of our small minds.