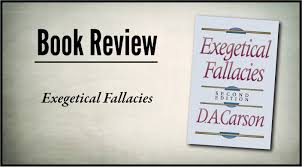 Perhaps the most important chapter in the book is this one: “Logical Fallacies.” The first error is “false disjunctions.” For example, someone said that where St Matthew follows St Mark in reporting a miracle (and I do accept that St Matthew had St Mark’s Gospel before him), he shortens the account of what was done, but has more “theological reflection” (whatever that may be in the Synoptic Gospels). Whether this is right or wrong, he concluded that this showed that the miracles were important not for themselves but for their message. This is a case of false disjunction: the way it is logically posed is wrong. Carson is also right to query whether any of the evangelists were ever interested in miracles for their own sake (91). But what I think Carson may be driving at, although he does not say it, is that this type of argument is often used to contend that whether the miracles took place in fact or not is unimportant. That is ridiculous. Of course it is important. What would be the value of the “theological reflection” if it was based on a fiction?

Carson is on firmer ground when he says that an apparent disjunction such as Hosea 6:6 (“I desire mercy not sacrifice”) is not meant to say that the cult should be abolished, but to startle us into appreciating the prime value of mercy (91).

The “failure to recognise distinctions” is his second fallacy. He gives as an example taking the teaching that “in Christ there is no male and female” (Galatians 3:28) as meaning that men and women are the same in all respects. In Galatians, argues Carson, St Paul is speaking about justification. It would be “methodologically illicit to decide in advance that because male and female are alike in certain respects they are therefore alike in all respects” (93). Further, Carson notes, the fallacious interpretation of the passage is supported by failing to take into account other parts of the New Testament which would tell against it, the “appeal to selective evidence.”

This is a tricky area. Carson states that it is wrong to “illegitimately exclude” evidence, and “prematurely construct a grid, and so filter the rest of the evidence through the grid so that it is robbed of any substance” (93). What we need, he says, is “even-handedness” and to accept to be faithful to the truth rather than original in one’s interpretations of scripture (93-94). He takes as an example interpretations of 1 Corinthians 14:33-36 which, he concedes, suggest that women should not speak in church. This, he says, ignores that in 1 Corinthians 11:2-15, St Paul says that they can.

The principle is, in the abstract, correct. But to apply it is not so easy. How far does it go? What does one have to do to show that one is not excluding other evidence? Obviously one cannot consider every single verse of the Bible, one has to select what he thinks are the relevant verses. And once one admits there has to be selection, the clarity of Carson’s principle disappears. For example, in the instance he gives, the obvious difference between the two passages is that 1 Corinthians 14 is explicitly speaking about women speaking in church. 1 Corinthians 11, on the other hand, deals with praying and prophesying in general. And if the 1 Corinthians 11 passage is referring to gatherings like those in 1 Corinthians 14, perhaps St Paul had in mind women’s only meetings.

Then, even if we take 1 Corinthians 11 as referring to praying and prophesying in church, and so inconsistent with 1 Corinthians 14, another question arises: which of the two passages takes precedence? Why should we follow one rather than the other? The issue is by no means so clear cut as Carson presents it.

An argument of Hans Urs von Balthasar is taken: all things are yours if you are Christ’s, and he is God’s (1 Corinthians 3:21-23), and therefore all religions must belong to God (98-99). Carson’s treatment of this is unsatisfactory. The clearest weakness is that St Paul says “if you are Christ’s.” Carson, instead, refers us to other works, and does not really explode the argument.

Also under the microscope is the argument that “a text has many meanings, none of them objectively true, an all of them valid or invalid according to their effect on the interpreter.” But this, Carson replies, is “self-contradictory; for the authors expect us to understand the meaning of their articles!” (126).

I shall conclude this review by noting the fallacy of “uncontrolled historical reconstruction.” This occurs where one comes up with a “history of the church” and makes one’s reading of the evidence subservient to one’s history. A good example of it is the argument that Our Lord was a Jew, a Jew could not have believed that he was God, and therefore Jesus could not have believed that He was God. However, one’s view of history has to be based on the evidence: one cannot logically read the evidence in the light of what we think we know. What if all Jews had that idea, but not the Lord? If that type of argument was right, we would never have exceptions in history. But we do.

In sum, the book treats an important topic. It is a start. But it is neither thorough nor clear enough to be of great use, let alone a manual of fallacies. Someone should put their hands to it, and produce something better.