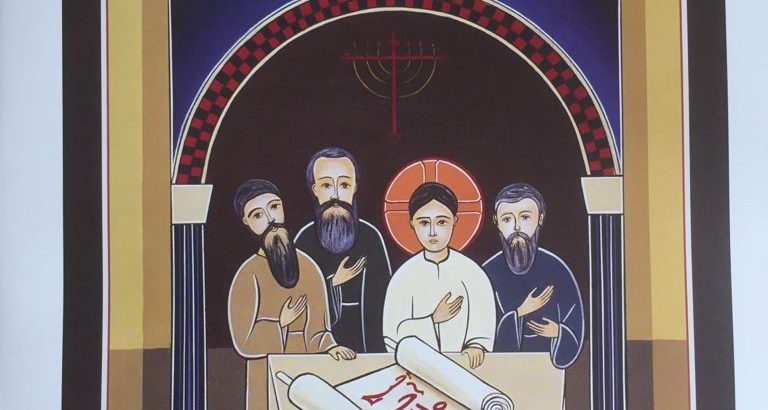 The Gospel reading for this week is Luke 2:46-49: “Now so it was that after three days they found Him in the temple, sitting in the midst of the teachers, both listening to them and asking them questions. And all who heard Him were astonished at His understanding and answers. So when they saw Him, they were amazed; and His mother said to Him, “Son, why have You done this to us? Look, Your father and I have sought You anxiously.” And He said to them, “Why did you seek Me? Did you not know that I must be about My Father’s business?” But they did not understand the statement which He spoke to them.”

There do not seem to have been any early examples of this feast in Syriac art. In his comment on the icon, Fr Badwi writes: “The child Jesus is sitting among the elders and the wise, refuting them with verses from the Scriptures. In front of Him are the scrolls of the Bible summarised by a verse beyond the limits of the tradition – “I must be in my father’s house.” The seven branch Menorah became a cross of light. The Rabboulian arch is surmounted by a cupola, a symbol of the celestial vault.”

The dominant feature of the icon is the Lord who stands looking at us with his right hand held in a gesture of piety to his heart, and his left hand on the table on which the scroll of scripture has been placed, indicating that this is what He is concerned with. The three elders with Him are distinguished very slightly by their left hands (on the table, hidden, beneath the right hand), their beards, and the lack of the halo which marks out the Lord. They are sober and serious men, but clearly the supporting case, so to speak.

Behind them is a double symbol. It is indeed, the menorah, the seven Jewish lampstands in one structure, from which seven fires lit from olive oil were kindled (candles were not used in the menorah). God commanded Moses to manufacture it in Exodus 25 from pure gold. The menorah had more than one symbolic value, but above all it represented light: the light of God which is in the middle, and the light of holiness and knowledge which  is in the world, as indicated by the six outer branches. Above all, it was a symbol of the Church (depicted as seven representative churches) in the Apocalypse/ Revelation 1:12, where the Lord is the One in the middle of the Seven Golden Lampstands.

So the menorah is already a symbol of the Lord and His Church, and here it is built on the Cross, which is picked out in deep red (perhaps signifying the blood which would be shed on it), with gold for the branches. It symbolises that the New Covenant has come and superseded the Old Covenant: “Therefore, if anyone is in Christ, he is a new creation; old things have passed away; behold, all things have become new” (2 Corinthians 5:17).

In Syriac, the icon is headed “Among the Elders in the Temple,” and the scroll reads: “It is right for me to be in my father’s house.” The cupola stands for the celestial vault, Fr Badwi tells us, but it is also the Temple, which is where this is taking place. It is clearly in His Father’s house (in Greek, the phrase could mean “about my father’s business,” it is not unambiguously saying “in my father’s house,” but the Syriac correctly interpreted the ambiguous phrase as referring to the house – and clearly makes that His answer – after all, He is explaining to His parents that they should have known where to find Him.)

The meaning of this is that Our Lord is always in His Father’s House, and is always to be found with the elders, sharing the Word of God and their understanding of it. While the onlookers were amazed at the things Our Lord was saying, I think that even more than this was what He was doing. The real depth of what He reveals about the Scripture is not a new intellectual understanding of what the words mean, or of how stories stand together: it is the change in the way of life.

I think this leads us to another aspect of the mystery which is opened up to us by this passage. His holy parents were worried for Him. They were no fools. If anyone ever born could have worked out where the Lord would be, it was Our Lady and St Joseph. Yet, they took three days to find Him. First, there must always be a search for the Lord. People can say what they like, but I believe that the finding of the Lord is always proportionate to the effort and the wisdom with which we have sought Him. Even Our Lady and St Joseph had to search for Him. They found Him, and so too can we, if we learn from them where He will be.

Second, there was something which Jesus had to do without telling His parents. This is, I think a lesson for all vocations. The Church has always said that when it comes to the sacraments of vocation, it is not always necessary to tell one’s parents let alone to seek their permission: after all, this is the one area in life where, whether we are right or wrong, we stand before God with our conscience and nothing else. There is a famous example in St Thomas Aquinas. His family did not want him to become a Dominican: they had already mapped out a comfortable life for him whereby he would become an abbot in due course. So opposed were they to his decision to join the Dominicans, that as he was on his way to them, his brothers kidnapped him and took him back to the family’s castle. There they kept him for a year, until they finally had to admit defeat, and arranged for him to escape through a window to save the family’s reputation.

There is another question for us: am I often enough in my father’s house? Even if I cannot make it to the Church, yet I can be more in His house – it is beneath and above the celestial vault.