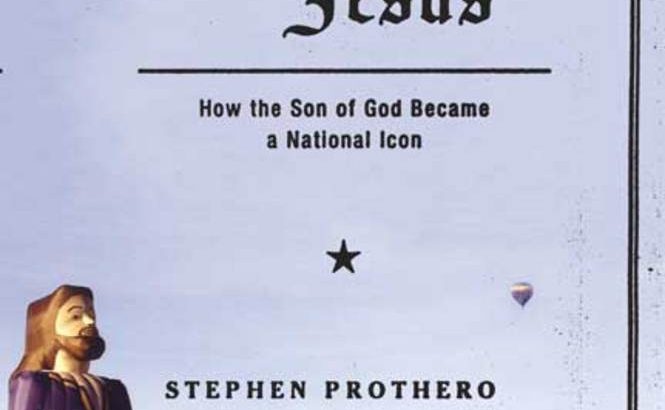 Further to my favourable review of Stephen Prothero’s American Jesus, it might be useful to consider how the “American Jesus” came to be. The idea of the Lord as a particularly wise and loving man, but in no way divine, has had a massive influence, even on those who accept – in some way or some form – His divinity. If we do not know the history of a prevalent idea, we tend to think that the idea is and always has been the truth, that no other notion is possible. It is therefore necessary to know history to be able to critique the present, and to discern where the truth really does lie.

I shall not dwell on Prothero’s valuable notes about the contemporary discussion on whether the USA is a Christian country or not: but he does make the significant point that there are two contrary tendencies, both wrong. The first is to “overlook the vitality of non-Christian religions in the United States,” while the second is to miss how important Christianity has been, how even “Buddhists, Hindus, and Muslims are adopting Christian norms and organizational forms, and how Methodists, Baptists, and Presbyterians are taking up, however stealthily, the beliefs and practices of Asian religions. (Nearly one-quarter of the Christians in the United States now believe in reincarnation.)” (6) TO consider how little non-Christian religion is acknowledged, just look up “Santeria” and “Santa Muerte.”

When it comes to Jesus in the USA, it was surprising to learn that before the Revolutionary War which ended in 1776, only one fifth of Americans were affiliated with a church, in the South it was only one in eight (the slaves had not yet begun to convert in significant numbers). What I did know was that under the influence of Calvin’s “Reformed theology,” the person of Jesus was not much revered, He “functioned more as a principle than a person” (10). The emphasis in Calvinism was on God the Father, and the Old Testament was more emphasised than the New in religious training (10).

In contemporary Europe, Christianity is considered old hat, and Jesus is “a mere curiosity.” Even in England, more than one out of five do not believe that Jesus ever existed. In Europe, there is no equivalent of the American two out of three who have made what they call “a personal commitment to Jesus Christ,” and almost three out of four say that they have “sensed his presence” (11). Almost a half of the non-Christians of the USA also believe that the Lord was born of a virgin and was raised from the dead (11).

But hasn’t there been a massive weakening in Christian belief and influence across Western civilisation? Oddly enough, Prothero suggests, it was the assault on traditional Christianity which “freed up” Jesus to become a hero to those who could not accept traditional Christianity (12). Now this is my thought, not Prothero’s, but I think that very many people have been unable or unwilling to accept Christianity, especially if associated with a Church, yet cannot conceive of life without the feeling they had from Christianity, and especially its ethic. These people then became attached to the person of the Lord, which they actually felt more at liberty to adopt as their own “life mascot,” as it were, because they did not have to take with it anything that they did not subjectively want to take. (Incidentally, the word “mascot,” comes from a French word meaning “witch” and “lucky charm,” and when Jesus is divorced from the Church He founded, there is a tendency for His picture to become something of a good luck token.)

Now, I do not believe that the cheapening of the Lord and His significance can stand for long: a person without the faith will find other heroes, and place these with or near Jesus. They will accept some of what the Lord say, but think that the rest of it must be errors which crept in with the Church (just as today some Christians will reject verses in the New Testament, saying that they are “interpolations.”)

Another aspect of the American experience which led to the “my buddy Jesus” cult was just this being freed from the supervision of a church: what Prothero calls “populist preachers competed for the hearts of parishioners by humanizing Jesus. Gradually they disentangled him (and themselves) from beliefs and practices that made them uncomfortable” (13). Again, the lesson for today is obvious.

The first stage in the USA was Thomas Jefferson (1743-1826, third President of the USA) literally cutting out parts of the Gospels he did like, to a fashion scrapbook Jesus he approved of, and so that have “Jesus without Christianity.” The next phase was for opponents of Calvinism to use Jesus to have Christianity without Calvinism (e.g. arguing that Jesus came for all not for some) (12-13). Now this last argument is not wring: it just does not go far enough and see that the Lord came to save all by founding a Church (this is my argument, not Prothero’s).

These early American preachers did not deny the divinity of the Lord – rather, they emphasised His humanity, and by dwelling on His lovable features, “they emboldened their Jesus to rise up and overthrow his Father as the dominant person in the Trinity” (13). Remember, this is unbalanced theology came in reaction to Calvin’s own unbalanced theology. In the second phase, in the wake of the Civil War, using Darwinism, comparative religion, and biblical criticism (note those three very carefully), they replaced Luther’s sola scriptura (Scripture alone), with solus Jesus (Jesus alone) (13-14). The third stage came with removing Jesus from Christianity, something promoted by people of other faiths (14). Prothero’s conclusion is sobering:

After the American Jesus – born in Jefferson’s White House and raised by evangelical and liberal Protestants – turned his back on his Christian upbringing and struck out on his own in multireligious America, conservative believers beckoned him back to what many still believe is a Christian nation. But the genie was out of the bottle, and Americans of all religious persuasions (and none) now felt free to embrace whichever Jesus fulfilled their wishes (14).